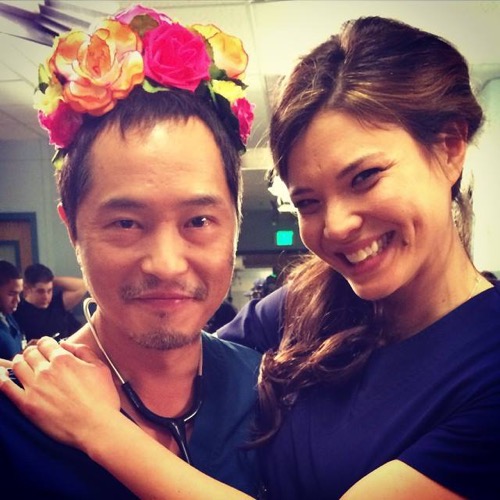 Tonight on NBC their new drama The Night Shift airs with an all new Monday, March 2 season 2 episode 2 called “Back at the Ranch,” and we have your recap below. On tonight’s episode, the night shift is tested when a rancher accidentally shoots his wife. Elsewhere, TC [Eoin Macken] heads to a teen party to save the life of a young football star.

On the last episode, Topher took over as chief of the night shift in the Season 2 opener. Also: TC was temporarily suspended; Jordan was scrutinized for her mishandling of the man who shot a recovered Topher; a father was trapped under an elevator; Ragosa returned to the ER. Did you watch the last episode? If you missed it, we have a full and detailed recap right here for you.

On tonight’s episode as per the NBC synopsis, “the night shift is tested when a rancher accidentally shoots his wife. Elsewhere, TC heads to a teen party to save the life of a young football star; Jordan and Kenny treat a beauty queen in severe distress; and Topher makes a decision about his job.”

Will The Night Shift be another huge hit for NBC? Tune in tonight at 10PM EST and let us know what you think. We’ll be recapping all of the action right here for you. Will you be checking out the action? Hit up the comments and let us know your thoughts!

Tonight’s episode of The Night Shift kicks off with a man running in to the emergency room carrying his bloody wife screaming for help. He confesses that he shot his wife Melissa because he heard a noice in the barn and thought she was an intruder – she is still conscious and rambles to the doctors about reading The Great Gatsby at her book club. She codes and her heart stops beating, TC begins scrambling to work on her and kicks her husband out of the room.

In the hallway Drew rants to Topher that he volunteered to come in to work on his night off because Rick is driving him insane. He can’t be around his negative attitude anymore, Topher reminds him that Rick did lose his leg. Drew says everything will be better once he gets a prosthetic leg and goes to rehab – but they are still waiting for a referral from the VA.

Jordan rushes in to the emergency room where TC is working on Melissa, she was shot in the chest. TC fumbles around and says that he just needs to repair her aorta, Jordan tries reason with him that there hasn’t been any heart activity and the woman is gone, he needs to call it. TC continues with the paddles for a few more moments and then finally gives up and calls the time of death.

Jordan follows TC to the lounge where he is listening to music on his headphones. He finally turns the music off and Jordan asks him if he is okay. TC rants that he has seen a lot of people die, but you can never get used to it. TC feels responsible for her death – Paul barges in and interrupts. The police just busted an underage drinking party and there are multiple injuries and possible overdoses. There is one kid that Gwen can’t move – she needs TC to come out and help her.

TC heads to the bonfire, Gwen is waiting for him. When the police arrive two kids hopped on fourwheelers and tried to outrun them but drove through barbed wire fences and crashed the four-wheeler. One kid is wrapped up in the barbed wire and bleeding profusely. TC tells Gwen that they need to get him untangled before he starts to bleed out.

TC gets to work on Brian, his friend Terrence stands by and holds the IV bag for them – Terrence cries that he and Brian both had scholarships to play ball in college. Thy give Brian some morphine and knock him out so that they can get to work cutting the barbed wire out of his stomach.

Back at the hospital, Topher is hazing Ragosa – it’s his first night as a physician’s assistant and he wants to work on some patients but Topher sends him on a mission to find a “thereastrap” which doesn’t even exist. A woman in a pageant dress with a tiara on stumbles in to the emergency room and passes out on the floor. Jordan rushes her in to a room and her heart is beating rapidly – she admits that she took some diet pills and then begins panicking and says she has to go because a guy is waiting for her. Jordan won’t let her leave and says they need to give her some sedatives to slow down her heart rate and stabilize her.

The emergency room is full of drunk kids vomiting and tripping on shrooms – Ragosa is thrilled because Topher tells him he can administer IV’s and order tox screens on some of the teens. Jordan checks in on Sandra, the pageant queen, she lectures her about how dangerous diet pills are. Sandra whines that she had to take them so that she could win and get money for college. Her heart rate gets worse – so Jordan gives her some beta blockers and leaves. Sandra panics in bed when she realizes that her cell phone is dead.

TC and Gwen rush Bryan in to surgery and call for Chavez to work on him. His friend Terrence follows him and wants to stay with him – TC convinces Terrence to go in another room with Kenny so he can look at his dislocated shoulder. Topher is in with a pregnant woman and Ragosa interrupts he whines that he isn’t getting to see any real action or work on patients.

Jordan checks in on Sandra and the beta blockers aren’t working – her heart beat is just getting worse, she calls TC for help. TC arrives and pulls the blanket down and she is covered in blood. They pull up her gown and realize that she just had a botched boob job, Sandra starts going in to a seizure and her vitals get worse. TC looks at her breasts and realizes there is something inside them – dozens of bags of cocaine. They start fishing the cocaine out of her breasts and her blood pressure starts to decrease.

Ragosa and Paul are in with two drunk girls who have passed out. Ragosa notices that their urine samples look strange – and he turns off the lights and they are glowing in the dark. He explains to Paul that they probably made their own moonshine and put antifreeze in it. While they are analyzing their urine samples, both girls start crashing at the same time. Paul rushes out to get help, Topher rushes in and says both girls are in renal failure. The medicine that they need will take an hour to get there from the pharmacy – Topher says they don’t have an hour and tells the nurses to go find some beer ASAP.

Out in the waiting room Drew is going insane because Rick won’t stop calling him. He says he is going to call the DA doctor and lie to get him to the ER so he can sign Rick’s release papers. Kenny takes him for a walk and talks some sense in to him. While they are talking Terrence approaches them and his arm has been popped back in the socket, he asks Kenny if he can have another pain killer because his head is pounding and then he vomits on the floor and falls down.

Kenny and TC rush Terrence in to an exam room – he is a high-school football player and just had a game that day. They realize that he has had multiple concussions and his brain is hemorrhaging. TC drills a hole in his skull to reduce some of the swelling and they rush him up to neurosurgery. Jordan checks in on Sandra and tells her that they had to call the police – she offers to call a lawyer for her that will take her case for free. Meanwhile out in the lobby Ragosa is throwing a fit because he realizes that thermastraps don’t exist and Topher sent him on a wild goose chase. Topher and Molly laugh hysterically.

TC checks in on Bryan where Chavez is working on him. Meanwhile, Jordan returns to Sandra’s room and she has run away. Jordan and Molly follow her bloody footsteps and find her passed out in the nursery on the floor. Jordan comforts her and Sandra confesses that the person that put the coke in her boobs was her boyfriend, but when she started getting sick he threw her out of the car and left her on the corner.

Bryan is out of surgery and in the clear, TC thanks Chavez for letting him help and heads off to the waiting room to talk to his parents. Jordan runs in to Topher in the lobby – she demands to know why he is acting weird, he thinks that she is mad and wanted the head position. They realize that neither one of them want the job – so Jordan laughs that he is stuck with it.

TC heads in to Terrence’s room to check in on him – he is out of surgery but devastated because he can never play football again. Kenny interrupts and asks to talk to Terrence alone. Kenny explains that he knows how he feels, he used to be a five star recruit – but his glory days ended his freshman year when he fractured his back at training camp and he understands how he feels. Terrence snaps that maybe some day he can be a nurse like Kenny too and clean some bedpans. Kenny takes the hint and excuses himself, but tells Terrence he can always come talk to him if he needs to.

The shift is finally over, TC gets ready to leave, Jordan offers to take him out to breakfast but he turns her down, he just wants to be alone because he can’t stop thinking about the woman with a gunshot wound that he lost.