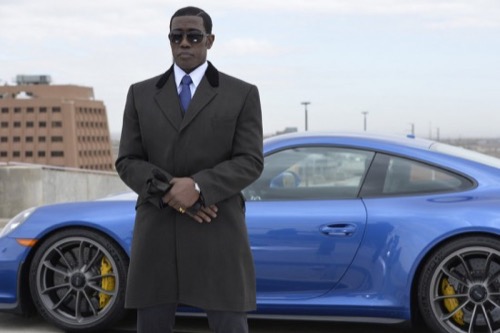 Tonight on NBC their new show, The Player with an all new Thursday September 24, season 1 premiere episode called, “Pilot” and we have your weekly recap below. On tonight’s episode, the series premiere introduces Alex Kane, (Philip Winchester) a security expert who encounters an elite gambling organization called the House that is led by the mysterious Mr. Johnson. (Wesley Snipes)

On tonight’s episode as per the NBC’s synopsis, “the series premiere introduces Alex Kane, a security expert who encounters an elite gambling organization called the House that is led by the mysterious Mr. Johnson. Kane joins the group, whose members place bets on whether he can prevent future crimes in hopes that they can assist him in catching his ex-wife’s murderer.”

Alex Kane is a security consultant. Usually he’s brought in to find the many faults in someone’s personal security and then fix them. But at a cost!

So mostly the rich and famous are the only ones that can afford him. Though he is worth the price tag and just look at what he was able to do in a single morning. He found the faults in a wealthy Arabic man’s security and the man in question just happened to be someone who may have made a few political enemies in the past. And so when the client’s own security detail refused to listen to reason, he continued working the case until he spotted an attempted murder in progress and was thus able to protect his client despite the many things in the way.

Yet, after such a day at work, all he wanted to do was spend time with his ex-wife. Technically they hadn’t signed the papers and were still sleeping with each other. So really there was always the possibility of them getting back together.

And that night they agreed to do just that. Ginny said she wanted to try again and Alex was happy to say “yes”. Ultimately they both knew how much they loved each other and that’s why it they kept going back to each other.

But on the night when everything was finally coming together, something happened. A man broke in and tried to kill Alex. When he failed at that he then killed Ginny out of spite. So Alex then attempted to apprehend the man that killed his wife but, once the man got away, it didn’t look good for Alex. He had picked up the man’s gun when he went after him thus the police only found his prints on the murder weapon.

And oddly there weren’t any witnesses. Now everyone can recall seeing an practically naked Alex running down the Vegas strip with the gun yet no one seemed to have paid attention to the man he was in fact chasing. So all of that together made it look like Alex had killed his wife.

It was so bad that not even Alex’s close friend Detective Cal Brown could defend him. And with the odds already stacked against him, the one thing Alex could think to do was to hunt down the man that killed his wife. So Alex busted out of his handcuffs and was trying to make an escape from the police when a mysterious woman offered him a ride.

Her name was Cassandra and she was the same woman that had hit Alex with her car on the night his wife was murdered. So naturally Alex had a lot of questions for her. Earlier he had given the police her plates so that there was at least a witness to him tracking the real killer that night but Cal said he couldn’t find those plates in the system.

His exact words was that those plates “didn’t exist”.

So Alex wanted to know who Cassandra was. And his curiosity definitely went up a notch when he saw how easily she was able to get rid the cops that were following them.

There was no speedy maneuver with her car and she hadn’t been on the phone. Yet in a matter of seconds after they checked her license plates – the cops just went away. As if they didn’t have the authority to continue chasing her.

And that’s the thing, they don’t. Cassandra told Alex that she works for an organization that predicts crime. Consequently they ended up finding out that someone was going to be kidnapping a teenage girl. Her name was Shada Raqib and it was Alex that had protected her father the other day.

Apparently, the plan all along was for the kidnappers to kill Shada’s mother and then demand an even bigger payday off her father for the young woman. But, before they acted, they had to test Raqib’s security and what they found out is that Alex was good at his job. So that’s why they sent someone to kill him and ended up killing his wife.

It was all part of Shada’s kidnapping.

Yet the organization that had enlisted Alex wanted him to do his part to either stop the kidnapping or at the very most rescue the girl because it was part of a game. They take bets on crime and bunch of rich people that have money to burn then bet on who would win. The good guy or the perp. So, at the time when they were letting Alex in on what was going on, there was already millions of dollars on the line.

And just for a minute, Alex wanted to deny them their spot. But then he remembered Shada and Ginny. So that’s when he knew he had to play the game in order to get their help.

He had stopped the murder of Shada’s mother but it couldn’t stop her kidnapping. So unfortunately he needed all the help that Cassandra could provide. And that meant getting her assistance with surveillance footage and the code to a fire alarm.

Though, finding Shada again, unearthed a few of the family’s secrets. It seems it the Raqibs’s head of security that had betrayed them. He had hated his boss so it was going to make it easy on the kidnappers and even make a profit afterwards.

So having Shada’s mother put a knife in his hand gotten him to open up and once again it was Cassandra that facilitated Alex’s rescue attempt.

Yet this time it was up to Alex to figure out whether or not saving Shada was important. See he was given the chance to either rescue the girl or kill the man that shot his wife. And, in the end, he chose to save the girl. A very noble act, mind you, but what happened to this generous hero? He was immediately arrested afterwards for evading the police.

Cal is an officer of the law so that meant he still had to bring his friend in but thankfully Alex’s sacrifice interested the people behind the bets. So they had Johnson who ran the game for them to go in to clear away the charges against Alex. And following that Alex was asked to become a more permanent player in this sick game.

But here’s the thing, Alex wanted to refuse the offer and he would have if someone hadn’t swapped his wife’s body at the morgue.

He had went down there expecting to say his last goodbye and was faced with a total stranger. So he asked the coroner and the man said the FBI had dropped her off. And there’s only one man that Alex knew that was going around town pretending to be FBI – Johnson.

So Alex took the job and he’s hoping he’ll eventually find out what happened to his wife.