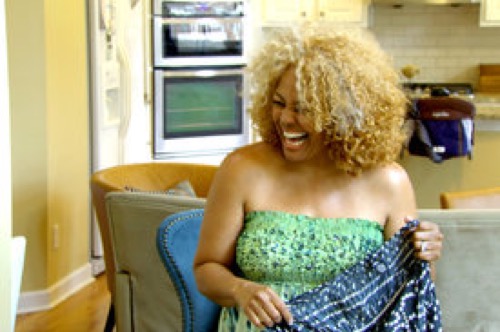 Tonight on Bravo The Real Housewives of Atlanta continues with an all new Sunday November 22, season 8 Episode 3 called, “Party in a Sweatbox,” and we have your weekly recap below. On tonight’s episode after their heated confrontation at Cynthia Bailey’s eyewear launch party, Kenya Moore attempts to reconcile with Shereè Whitfield.

On the last episode, Kenya took her “Life Twirls On” TV pilot to former actress-turned director Kim Fields seeking her advice. Cynthia struggled with the embarrassment following the viral video of Peter. Shereè threw shade when Kenya questions the state of Chateau Shereè. Porsha introduced her new boyfriend to friends and family. Missing her close friendship with Phaedra, Kandi decided it’s time to confront their issues, once and for all. Did you watch the last episode? If you missed it, we have a full and detailed recap right here for you.

On tonight’s episode per the Bravo synopsis “after their heated confrontation at Cynthia’s eyewear launch party, Kenya attempts to reconcile with Shereè. Meanwhile, Peter disappears to Charlotte, while his marriage to Cynthia remains on the rocks. Phaedra and Kandi update their loved ones on their recent chat, but both have differing views on the state of their friendship. Kim Fields spends a rare night out on the town and meets the rest of the Atlanta ladies. Meanwhile, Kenya launches her Moore Hair Care line with a big, hot party that leaves everyone literally feeling the heat.”

Phaedra is treating Porsha to the first colonic of her life.  She says in confessional “… that there are people who need a good colonic because they’re so full of poop they are three shades darker than they should be. Kendra.” While Porsha is undergoing the colonic, they decide to talk about other things. Porsha says she asked Duke whether he was freaked out by her over-the-top farewell party and he says he’s past it. She then criticizes people at the party who were talking negatively about him, bringing up Kandi.  Phaedra asks Porsha how she would feel if her friend had her husband’s motorbikes in their home, revealing that that’s what Kandi and Todd did to her. “I felt we were better than that,” Phaedra says about her friendship with Kandi.

Kandi tells Todd that Phaedra is mad she didn’t tell her about the motorbikes being at their house.
Todd says Apollo was the one who asked him to keep the stuff there so he doesn’t understand why Kandi is mad. Kandi says she’s glad they finally had this conversation because clearly there were things that were bothering her that she didn’t know about. “She cutting a check?” Todd asks, referencing money Phaedra owes him for an unreleased exercise tape. Kandi says they talked about that and the conversation was back and forth on it but ended on a positive note.

Peter hasn’t contacted Cynthia in a week, Cynthia reveals in confessional. She says she is upset about it but has other things to focus on, such as finding a tutor for her daughter. She says that they have decided to homeschool her so she can work on her singing career. The tutor is a hot 26-year-old, and Cynthia wonders aloud if her daughter will be distracted.

Cynthia talks to Leon about her deteriorating marriage to Peter. Cynthia says they have always had ups and downs, but she is at the point where she is not trying to be in something just to be in something. Leon tells her that she knows she has been in a lot of relationships she hasn’t stayed in, but this time is different because she got married. He says that if she exhausts every avenue and then it doesn’t work, she is right and she should leave him, but she has to fight with her marriage. Cynthia ultimately agrees with him.

Kandi and Porsha meet at the charity race. Kandi says in confessional that she likes running and she likes charity, and she also wanted to see if Porsha was really going to run. “Porsha is in shape so I guess she works out,” she says. “I don’t know how often she works out.” After the race, Kandi asks Porsha how she’s doing. Porsha says she’s supposed to see Duke really soon. She brings up the people who have been criticizing him and telling her to get background checks on him, saying in confessional that she wishes they would just be supportive. She tells Kandi that she knows what it was like from when she first started dating Todd. Kandi says at the end of the day, she was saying that Porsha should have done her preliminary research. She brings up the fact that she had already criticized her in the past, and that going forward she needs to be aware and not afraid to just ask. Porsha says what she is doing feels good, and when it doesn’t she’s going to deal with it, but she knows people are just looking out for her.

Kenya is getting ready for the launch party of her hair product. She uses one of the event planners from Cynthia’s party, saying in confessional that she wants to make her party way more glamorous.

Cynthia says in confessional that Peter continues not to have contact with her. She also says it doesn’t feel good to come home to an empty bed every night, and she has had a lot of time to think about their marriage. She calls Peter on her cell phone repeatedly and keeps getting sent to voicemail. She says in confessional that she feels they are being “disconnected” spiritually and emotionally.

Kim and her husband are getting ready for a are night without the kids at Kenya’s party. She asks him if he wants to do go dinner or something after. “Can we?” he says. She says she isn’t a girl’s night out kind of chick, and her husband suggests that’s why he doesn’t have any friends.

Kenya rushes to get the final details in place for her party. She says in confessional that she is concerned about getting too many or not enough orders, and that she is happy she has Brandon to lean on because even though she is Superwoman, she can’t do everything.

Porsha says in confessional that she is going to Kenya’s party to support her and all of her dreams. At the party, Porsha’s friend Shamea mocks one of Kenya’s products, a shampoo, calling it “watery.” Porsha laughs and the two of them continue to mock the shampoo. Porsha jokes in confessional that all this time she thought Kenya was selling a hair care line when she was really selling a water bottle line. They also go up to Kandi and tell her the joke. Kandi says in confessional that if Shamea were launching her product she wouldn’t want Kenya to be there making fun of it. Kandi leaves the party early because she can’t take the heat in the room because she’s pregnant.

Kenya arrives at her party, and leaves almost immediately because it’s hot.  She comes back, gives a cheesy speech and then goes to talk to her friends.  Shamea asks Kenya if there is water in her shampoo bottles, which makes her visibly perturbed.

Kenya then pulls Sheree aside, and the two of them talk about their previous fight. Kenya says she was not trying to come at her sideways that day and was just saying what she had heard about the house. Sheree says it didn’t come out that way. Kenya says she can’t be delusional, and the house isn’t finished yet. She says there’s been a lot of sanctions on the property, and Sheree cuts her off, saying she had one fine for erosion.
Kenya acknowledges that Sheree’s contractors did her wrong. The both of them agree to come straight to eachother from now on. “Sheree’s bark is definitely bigger than her bite,” Kenya says in confessional. “I’m glad we can end things on a good note.” “I am a bigger, better person so I can kind of let bygones be bygones, but I still know that the bitch is sneaky,” Sheree says in confessional.

Cynthia comes home after 10 days of being apart from her husband to find him sitting on the couch. Cynthia tells him she feels like he acted completely inappropriately at her party, and he agrees, admitting he was inebriated at the party. He says he didn’t know what was going to come at him over that stupid video. Cynthia says it’s no big surprise that if you give people something to work with, they’re going to. Peter says he saw her coming down the spiral staircase, and the last time he saw her walk down that staircase was at their wedding. He says that it’s like they got married and it was all work, and their ambition superceded their relationship.
Cynthia says that Peter says their problem is they don’t spend enough time together, and that she doesn’t have time for him. She says that she is not the one who built a bar in Charlotte. She says that she feels she has done a lot for the relationship and relationships have obstacles.  Peter says that there are obstacles in relationships but that doesn’t mean it’s anyone’s fault.

Cynthia says she isn’t saying it’s his fault, and that all she knows is she is unhappy and that she has come to the conclusion she isn’t in love with him anymore. He asks her when she stopped being in love with him, and she says she doesn’t know and there have been so many things that happened and she doesn’t know if they are compatible.  Peter says he never stopped loving her, and Cynthia says that him saying it won’t be true for her.
Peter breaks down in tears as he says that he can’t even understand the concept of her not loving him anymore. Cynthia says that she just knows if they continue it can’t go on the way it has, and that this is the first time they have talked like this in a long time. Cynthia asks Peter if he is the type of person to stay in something just to stay in it, even if it’s not working anymore. Peter says when they fell as hard as they did for eachother there is no back door. Cynthia says she doesn’t think that’s realistic.

Peter says that when a man and a woman come together and make a commitment, they have got to make it work. Cynthia says sometimes it just doesn’t work out, and that’s why divorce exists. Peter says he doesn’t believe in that word, but he is going to do everything he can. Cynthia says she can’t automatically believe what he is saying, but will give it a shot.