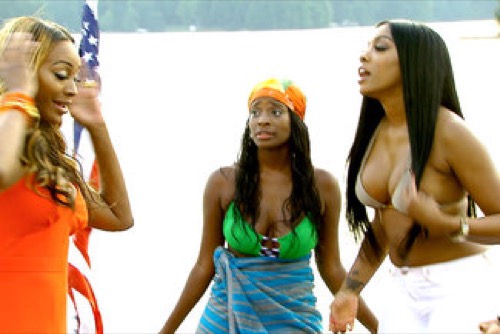 Tonight on Bravo The Real Housewives of Atlanta continues with an all new Sunday November 29, season 8 episode 4 called, “Rocky Boat Horror Story,” and we have your recap below. On tonight’s episode Kenya Moore makes a surprise visit to Chateau Shereè and is astonished by what she uncovers. After Cynthia Bailey and Peter’s emotional talk surrounding their relationship, Cynthia talks with Kandi Burruss about the uncertainty of her marriage.

On the last episode, after their heated confrontation at Cynthia’s eyewear launch party, Kenya attemptsed to reconcile with Shereè. Meanwhile, Peter disappeared to Charlotte, while his marriage to Cynthia remained on the rocks. Phaedra and Kandi updated their loved ones on their recent chat, but both had differing views on the state of their friendship. Kim Fields spent a rare night out on the town and met the rest of the Atlanta ladies. Meanwhile, Kenya launched her Moore Hair Care line with a big, hot party that left everyone literally feeling the heat. Did you watch the last episode? If you missed it, we have a full and detailed recap right here for you.

On tonight’s episode per the Bravo synopsis “Kenya makes a surprise visit to Chateau Shereè and is astonished by what she uncovers. After Cynthia and Peter’s emotional talk surrounding their relationship, Cynthia talks with Kandi about the uncertainty of her marriage. Meanwhile, Porsha and Duke hit a bump in the road. Sensing Cynthia needing a shoulder to lean on, Kenya suggests a day trip on a boat with the girls to take her mind off things. The ladies set sail for a tranquil afternoon booze cruise of fun and sun but things quickly take a turn for the worse when Cynthia and Porsha clash — shocking everyone on board.”

Kenya goes over to Sheree’s as-yet-unfinished house. Kenya suggests they make a bet as to who will finish their house by Christmas, and Sheree agrees.

Sheree says in confessional that Kenya needs to worry about her barn in a ditch before she throws shade at others.

Kenya invites Sheree to a party she is throwing to make Cynthia feel better about her declining marriage.

Phaedra and Porsha go shopping. Porsha looks for lingerie to spice up her Facetime sessions with Duke, and Phaedra looks for herself.

Phaedra says in confessional that Porsha may be doing a little too much for Duke, but it is not her place to comment when she is not asked.

As the two of them leave the store, Phaedra thanks the cashier and says it was nice to visit their store of “oddities and eccentric gifts and novelty things.”

Kandi is trying to work less now that she is pregnant, but refuses to stop working entirely because things wouldn’t get done without her.

Cynthia visits Kandi and asks her about her pregnancy, and Kandi says she is having some issues. Cynthia tells her that maybe she should slow down. Kandi says she has, but Cynthia brings up all of the Instagram photos of her out and about. Kandi then tells Cynthia that she and Todd have been thinking about starting a family restaurant. Cynthia tells her that restaurants are hard, but Kandi says she is being supportive of Todd because it’s something he wants. Cynthia says she understands because that’s what she did with Peter and Bar One. Cynthia says she isn’t a fan of the restaurant business because it has Peter working out at the bar in Charlotte. Kandi asks her if that bar isn’t successful, and she says it is successful because Peter is always there. She then tells Kandi that her marriage honestly isn’t working. Kandi asks her if it’s really that deep, and she says it’s just too hard. She tears up, saying she isn’t going to be 50 and sitting up in a marriage when she isn’t happy. She tells Kandi that she and Peter made a deal that they are going to give it a real shot. Kandi asks her what giving it a real shot means, and Cynthia says right now they’re speaking.

Phaedra asks Kim who her friends are and she lists a bunch of men.

Kim criticizes the other women for having so much cleavage at the party. She says she believes in class, and Phaedra nods in agreement.

Phaedra asks her what she does without girlfriends, and asks her about doing things like getting their nails done.

“As long as I don’t look or smell homeless, I’m good,” Kim says.

Phaedra talks about how she likes to do things like getting her nails and hair done every week so she can have me time.

Kim says she gets caught up in her husband and kids, and Phaedra tells her she needs to do things for herself.

Kim breaks down in tears, saying she lost herself and didn’t know that until Phaedra said that.
Phaedra tells her they need to get together and have a day where they do things that have nothing to do with their uterus and are for themselves.

Porsha gets all dressed up in a bedazzled bra and a red and black robe to Facetime with Duke.
She waits for him, texting him for over an hour.

Porsha says in confessional that when they are together in person, everything is great, but now that Duke is away, the chemistry has definitely changed.

She calls Phaedra, talking about how she doesn’t know if she should be going through all this effort. Phaedra tells her that if Duke is not building her up, he is like a weight around her neck, and that everything runs its course. She tells her life is too short to be unhappy. Porsha says it’s still sad though, because she finally found someone and introduced him to her friends and family. She says maybe that’s why she is trying to force it, and Phaedra tells her not to.

Kenya goes to Cynthia’s house to pick her up for her party.

Cynthia’s friend Tammy is there.

Kenya says in confessional that all of her events have an exclusive guest list, but if Cynthia wants to bring her stray, she will let her this time.

When Kenya and Cynthia go over the people who will be attending the party to see who Tammy has met before, Tammy reveals that Sheree’s ex-husband is her best friend. When asked for the deets on their divorce, she says that he doesn’t think Sheree would have been with him if not for his sports career. She says that she doesn’t think gold digging is when someone sits there and thinks ‘let me date this person I’m going to take all their money,’ but rather a feeling.

In the car, Kandi reveals to the others that Cynthia is on the verge of getting a divorce.

Shamea arrives and Kenya wonders aloud why Porsha brought her.

Kenya says in confessional that she doesn’t know why Porsha brought Shamea to the party when Shamea was talking shit about her shampoo at her product launch party.

Porsha says since Phaedra isn’t coming, they should be able to accommodate Shamea.

Kenya tries to claim that Kim Fields is 50 years old, and she says that she is 46.
Kim says in confessional that she is only five months, not five years, older than Kenya.

Kenya gives a speech about Cynthia and Peter’s relationship problems to explain why she is throwing this party.

Kandi says in confessional that she didn’t know Cynthia and Peter were close like that.

Sheree arrives at the party.

Tammy says that she has to talk to Kandi. She brings up her rapper son’s song, and when she and Porsha don’t know what it is, she sings it. She says that she needs him to get into the studio with Kandi.

Kandi says in confessional that hey don’t need to be having this conversation unless there are budgets involved. “I’m not doing favors and I don’t even know you,” she says.
Tammy pushes her to set up a meeting.

Tammy also talks about her husband, describing him as “the whitest man in America” and “Nazi white” before Kandi and Porsha walk away.

Shamea expresses boredom at the party, so everyone starts doing shots. People take turns going down the slide on the boat.

Shamea brings up the launch party “when there was fake water in the supplies,” and Kenya shoots her a pissed off look.

Kenya says that she doesn’t like when people make digs at her, bringing up that Shamea was doing so at her party. Shamea says that if she has her product display, she is going to think it’s a sample. Kenya asks her if she realizes the negativity she is giving off. She says that she is a very successful woman, and Shamea says good for her and that she didn’t mean it like that.
Kenya tells Shamea that she is being kicked off of her boat, and even walks up to the captain to get her kicked off.

Immediately after this debacle, Porsha calls Cynthia a “bitch” in passing, and she pops off, standing up and yelling down at Porsha, who is sitting. Porsha tells Cynthia she doesn’t want her to stand up, because when she stands up it’s another situation. Cynthia continues to yell at her, calling her a thot.

Kandi says in confessional that people have been saying bitch all day, so she isn’t sure why this bitch is different from any other bitch.

Kenya tells her to apologize, and Porsha says that when someone apologizes, they’ve done something wrong. Sheree tells her to go talk to Cynthia by herself, and she immediately gets up and goes to Cynthia.

“You bring a tot on the boat, what do you think is supposed to happen?” Kenya asks Kandi, referring to Shamea. Kandi says that she was saying negative things about her as soon as she got on the boat.

Cynthia tells Porsha that she said “whatever, bitch” and that was disrespectful.

Porsha asks if she is seriously thinks she is calling her a bitch, and she says yes. Cynthia tells her to stop pretending that she doesn’t know what she did was rude and disrespectful, wagging her finger in her face. She says people call Porsha stupid but she knows she isn’t stupid. Porsha says people call her stupid too, and Cynthia says they call her that more. Porsha says she didn’t mean it that way, and Cynthia asks her if she was apologizing. She says that someone apologizes when they feel like they did something wrong. Cynthia says that if she doesn’t feel like she did anything wrong she should go over there, waving her off.
The episode ends as the two of them appear to begin a physical altercation.