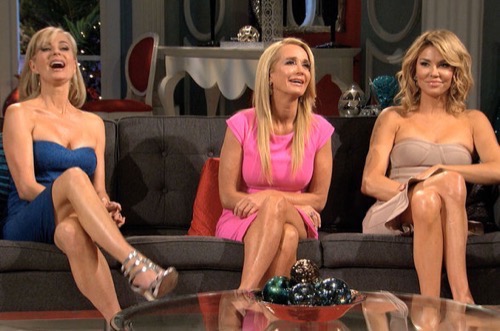 The Real Housewives of Beverly Hills returns to Bravo tonight with all new Tuesday March 31, season 5 episode 20 called, “Reunion Part I,” and we have your weekly recap below. On tonight’s episode, the gripping three-part reunion begins with Yolanda revealing the difficulties she faces relapsing with Lyme disease.

On the last episode, the women attended a splashy, over-the-top party thrown by the group’s old friend Adrienne Maloof. Lisa Vanderpump confronts Brandi about Brandi slapping her in Amsterdam, but Brandi doesn’t want to hear it. Kyle got angry with Lisa Rinna for not confirming to her sister that Brandi was also worried about Kim’s sobriety. Kim wanted answers from Brandi. Did you watch the last episode? If you missed it, we have a full and detailed recap right here for you.

On tonight’s episode as per the Bravo synopsis, “the gripping three-part reunion begins with Yolanda revealing the difficulties she faces relapsing with Lyme disease. Although she does leave the couch early, Yolanda stays long enough to defend her daughter from Brandi’s “alcoholic” comment and attempts to create some peace within the group. Kim declares she has more “pride” than Lisa Rinna in the roles she chooses and Brandi and Lisa Vanderpump getting into an argument that suggests little future for their onetime friendship.”

Andy Cohen is the host.

Cohen asks Brandi if there’s any love lost between her and Kenya Moore. She says absolutely not. Cohen asks her to describe the other woman, and she says Kenya is very very smart, a little bit crazy and evil.

When asked about Gigi being one of the biggest models in the world, Yolanda says she’s proud of her and Bella, who is also walking Tom Ford with her sister.

She starts tearing up, asking if he really wants her to talk about that. He says people really want to know how she’s doing, and she says she’s just trying to weather the storm and her brain needs quiet and silence. She does treatment in South Korea, where they have more freedom to work with stem cells.

When asked about her ill father, Brandi says he’s doing a lot better, and may have to have one more heart surgery.

Cohen brings up the fact that Kim and Kyle haven’t spoken in months. Kyle says it’s been a little over three months since they’ve spoken. Kim says they definitely have things they need to work on, and the girls have not made things better, they’ve actually made things worse. Kyle says Brandi has made it worse, and the other women just want to help.

Kim says as of right now, she’s okay with the way things are. She says she’s happy in her life today. She misses her a lot, she says.

Kyle says right now she really doesn’t know what to do either, but if and when they do speak, it has to be an honest conversation. When Kim is willing to do that, she will do that.

Yolanda says she doesn’t play peacemaker, but she looks at the world with an open heart and no judgment.Vanderpump says Yolanda makes excuses for Brandi and gives her passes. Yolanda says she doesn’t make excuses for her or give her a pass, and that she thinks it’s really easy for everyone to throw Brandi to the curb like garbage when they all aren’t so great themselves. Kyle says that Yolanda hasn’t been at the receiving end, and she doesn’t know how she’d think or handle it if it happened to her.  Yolanda says she thinks she needs them, and she won’t allow her to be pushed to the side.

Kim disagrees, saying there comes a time in your life when you have to put things aside and see the good in someone and move on.

The group discusses Brandi coming to Yolanda and telling her there was a rumor going around that her daughter, Bella, had a drinking problem.

Yolanda tells Brandi that as soon as Brandi said that, she knew what she was doing. She says she purposely did not react to what Brandi said because Bella is 17 and not an alcoholic and that no one has said that about her.

When the subject changes specifically to Brandi’s drinking, Brandi says she is a single mother of two kids, and there are a lot of times she doesn’t drink, but when she’s around this group, she needs to drink to be around them. Vanderpump calls her out for blaming her drinking on them.

Eileen says that when she’s commenting about Brandi’s behavior, she is commenting on how Brandi acts when she’s around her. She says there’s a “whole situation of ugliness” that occurs when Brandi gets drunk. Kim, on the other hand, says she doesn’t notice Brandi acting badly when she’s drunk.

Yolanda leaves the set to rest.

When asked how her parents are doing, Lisa Rinna says her father is in the hospital with pneumonia for the third time in a year.

A viewer asks her how much she made on her Depends commercial. She says she doesn’t want to say the exact amount, but it was more than she’s made on anything in her life. He asks if she made six figures on the job, and he says definitely.

Cohen asks Kim if she’d do anything for money, specifically if she’s more discerning on choosing jobs than Lisa is. Kim says she definitely is. Lisa asks what she means, and Kim says she has a bit more pride and probably wouldn’t go as far as she would.

A viewer asks if Lisa feels pressure to stay thin living in Beverly Hills. She says she was taking care of her parents and got sick in the winter and lost eight pounds.

Cohen asks Brandi if she thinks Lisa has food issues, and Brandi says she isn’t going to make judgments on her.  Cohen brings up the fact that Brandi is saying this because Lisa has said things about her. Brandi says the times she has seen Lisa she hasn’t eaten, but to call her anorexic would be irresponsible.

Lisa says that’s funny because Brandi has actually texted her calling her an “anorexic old hag.” Brandi completely denies the claim. She says she may have called her anorexic, but was comparing it to Lisa calling her a drunk. The other women agree that Brandi has a drinking problem which she has admitted to.

Kyle and Brandi start fighting. Kyle says she doesn’t run around with her tampon string hanging out. “Because you don’t get your period anymore, bitch,” Brandi responds.

The subject changes to Brandi desperately trying to get back into Lisa Vanderpump’s good graces. Brandi says she went into it with high hopes and tried very hard, but if someone doesn’t want to be friends with you, there’s nothing you can do.

A viewer says Vanderpump seems to have one set of rules for Brandi and another for everyone else. Vanderpump says she did love and enjoy Brandi in the beginning, but she just goes too far.

Kyle and Brandi start fighting again.  Kyle calls Brandi a “sick fuck,” asking Brandi why she hates so many people. She says she has no idea what she did to Brandi, and Brandi says she was physical with her. Kyle says she is so dramatic, and that she was pushing her arm down to get to her sister.

Vanderpump jumps in, saying that Brandi says that but got physical with her.

Kyle says she thinks Brandi is one of the most vile human beings she has ever met, and Brandi says she feels the same way.The conversation continues about why Vanderpump will not be friends with Brandi again.

Cohen says to Vanderpump that the situation is like playing with your dog that randomly bites you sometimes, and Vanderpump agrees. Brandi then gets offended. She says she’s taken enough abuse since she’s been here and isn’t going to take it from him too. He says it was an analogy and he was actually defending her. She says that wasn’t a defence.

She says she thinks Lisa is beating this thing to death. She says the second it happened it gave her a reason to hate her forever. When told she gave her the reason by slapping her, she says it was a joke. She says she knew Vanderpump was going to take it to the bank.

Vanderpump says she knows Brandi didn’t do it maliciously, but it changed the dynamic of the friendship again. Kyle says she can’t blame Vanderpump for holding a grudge against Brandi.

Cohen asks the two what happens next, and they say they are going separate ways in life. Vanderpump says they can’t be friendly again because Brandi will probably slap her, and that she isn’t interested in that kind of friendship.

Brandi tells her to watch her back, and Kyle brings up Brandi saying on her podcast that she was going to beat her up the next time she saw her.

Brandi says that she wants to, and that in her head she’s done it hundreds of times.