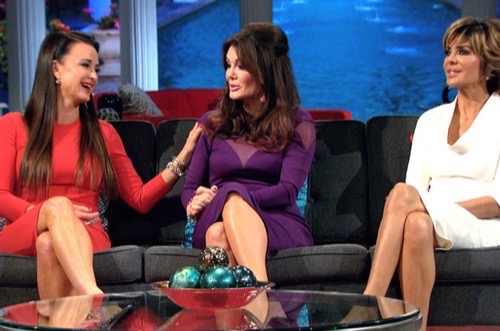 The Real Housewives of Beverly Hills returns to Bravo tonight with all new Tuesday April 7, season 5 episode 21 called, “Reunion Part 2,” and we have your weekly recap below. On tonight’s episode, the Beverly Hills Housewives continue reliving good times and airing their grievances. Eileen Davidson discusses how Brandi Glanville went from a high-school fan to a wine-tossing foe.

On the last episode, the gripping three-part reunion began with Yolanda revealing the difficulties she faced relapsing with Lyme disease. Although she did leave the couch early, Yolanda stayed long enough to defend her daughter from Brandi’s “alcoholic” comment and attempted to create some peace within the group. Kim declared she had more “pride” than Lisa Rinna in the roles she chose and Brandi and Lisa Vanderpump getting into an argument that suggests little future for their onetime friendship. Did you watch the last episode? If you missed it, we have a full and detailed recap right here for you.

On tonight’s episode as per the Bravo synopsis, “the Beverly Hills Housewives continue reliving good times and airing their grievances. Eileen discusses how Brandi went from a high-school fan to a wine-tossing foe. Kim delves into her own issues with the soap stars and goes after Lisa Rinna as they debate the glass-breaking incident in Amsterdam and Kim’s veiled threats to reveal something about Lisa’s husband Harry. Leading into a breakdown between sisters, Kim and Kyle vacillate between anger and tears.”

Eileen is asked why she joined the Real Housewives after being such a name in daytime television. She says it was enticing to try something new, and she wanted to go for it because she doesn’t care what anyone thinks or says about her.

The incident of Brandi throwing wine on Eileen is shown, as well as their other drama, such as Brandi calling her a homewrecker.

A viewer asks Brandi what she thinks of Eileen now that she knows her. Brandi says she doesn’t really think of her. Brandi is asked what she first thought of Brandi, and she says Brandi was funny and they had a good time together until the wine incident.

Cohen asks Brandi why she threw the wine, and she says she guesses she wasn’t thinking. Eileen tells Brandi that at first she said the wine thing was about her being a fan, only to change her story later and say it was about her having an affair with a married man while married herself. Eileen says she had to have a talk with her children because of the press coverage.

Lisa Rinna asks Brandi why she asks the way she does, and Brandi says Lisa isn’t a therapist.  Cohen asks Brandi if the way Eileen met her husband was a trigger for her, and Brandi says she had a friend who slept with a married man, saying she stopped being friends with her because of it.

Eileen says that she retracted her acceptance of Brandi’s apology upon finding out her real reason for throwing the wine on her.

Cohen asks Brandi if she could get rid of anyone from the cast, who it would be. She says Eileen, because she doesn’t bring anything to the table. Eileen asks her what she brings to the table. “Conflict, I guess,” Brandi says.

Vanderpump jumps in and says Brandi wants to be able to do whatever she wants and be forgiven every time she apologizes. Brandi says that Vanderpump managed to forgive Kyle, who is only her friend when she is selling her house.

A viewer asks if Kim’s opinion of Brandi has changed after seeing everything she has done to Eileen. Kim says no because “Brandi’s Brandi” and that everyone has accepted her for who she is.

Kyle asks Kim if Brandi didn’t call her a meth addict. Kim says they forgave eachother, and she had to go on and accept her for who she was.
The women criticize Brandi for having a problem with everyone, and she denies it. Kim tells her that she may have more problems with people than others do because her personality is different.

Rinna tells Brandi it seems she can dish it out but not take it. However, Brandi says she can take it, but the person will get it back.

A viewer says Brandi is clearly jealous of Eileen. Brandi says she is happy for all of the things Eileen has, but she wouldn’t wish ill to anyone. She says she would have to be jealous of all of her friends.

A viewer asks criticized Vanderpump for letting her son live in the dark with no electricity. Vanderpump says he can work a few more shifts. She is asked why she doesn’t just give him a raise, and she says he has to earn it.

The topic changes to the drama surrounding Kim and her sobriety.  They discuss poker night at Rinna’s home, where she suspected Kim was high. She says Kim was loud and aggressive and “high as a kite,” saying scary things to her. She says by the time they got in the car she asked Harry what she should do because she knew she had an hour in the car with Kim acting like a crazy woman.

Kim says she had been sick for weeks with bronchitis and pneumonia. She says she was given something for pain, and she did not realize what was happening until she and Kyle went into the bathroom. Kim claims Kyle said she wanted to speak to her sister in the bathroom, and that Kyle told her Rinna said she was acting crazy in the car. Kyle denies any of this, saying she never said she wanted to speak to her and that conversation never happened, asking why they wouldn’t show it if it had happened.

Kim says she doesn’t consider it a slip or a relapse. She says the next day she was in the hospital, where she stayed for a week. Rinna asks her how many days she was there, saying she changes the story. Kim asks her why she doesn’t worry about her kids.

Rinna asks Kim if she has apologized to her or Eileen, and Kim says she doesn’t think she owes them an apology after what they did for her.

Kim says she tried to leave, but Kyle told her to stay and have some pizza. Kyle says she told her that because she wanted her to sober up before driving.

Eileen says the times Kim has been in her home, her behavior was concerning.  Kim says if she were taking pills, she wouldn’t take Monty’s, she would have her own stash.

Rinna says she feels for her because she had her sister die from drug and alcohol abuse. Cohen asks Kim if she doubts their concern was from their heart. Kim says no, but that all she saw on the show was Rinna running around saying she was relapsing and needed an intervention.

Brandi says they decided on the plane that the matter would not be discussed again. Rinna says she discussed it in the context of sharing her experience with her sister’s death, and Kim says she should talk about her own family, but leave her out of it.

Rinna says it started with Eileen, whom Kim called a “beast,” and Kyle, whom she also insulted. She says that Kim then insulted her husband’s character by hinting at something he has done. They argue over the semantics of what Kim said, then Rinna invites her to expose the information. Kim says she wouldn’t do that to her and her children, and Rinna asks what he has done. Kim says she won’t share it because it’s very private, and when Rinna says she doesn’t even know Harry, Kim says it was something she heard.

Cohen asks Kim if she has apologized to Eileen for calling her a beast in Amsterdam, and she says no. Cohen asks if she thinks she owes her an apology, and Kim says yes, then apologizes to her. She says she was very heated and angry, and she doesn’t know if she realizes what she says when she is that angry.

Rinna says she never got an apology from Kim, who came to her room that night.

Cohen asks about Kim getting angry with Kyle for not defending her. Kim says Kathy has seen it and she was appalled.
Lisa Rinna asks if Kathy is God.

Kyle says she could not defend her because the way she acts and the things she does are “mean.”  Kyle says Kim did nothing while Brandi has talked shit about her and her husband.

The two sisters agree that they are not in a place to make up as they both feel betrayed by one another. Kyle says she doesn’t have to be at Kim’s daughter’s wedding, saying she only has tried to mend their relationship because she loves Kim’s kids as if they are her own. She bursts into tears, saying if Kim wants to take them away from her too, she can.