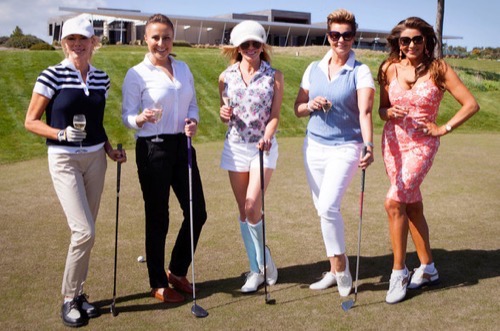 The Real Housewives of Melbourne returns to Bravo tonight with all new Thursday March 26, season 2 episode 4 called, “Anyone for Golf?” and we have your weekly recap below. On tonight’s episode, Chyka Keebaugh and Bruce collaborate with Eddie McGuire on a new building project; the women play golf.

On the last episode, as Jackie and Ben got creative on their latest marketing pitch for La Mascara, Chyka’s bubbly daughter Chessie and Janet’s witty BFF Manuela were introduced to the rest of the ladies. Mounting tensions between Janet and Gamble reached a crescendo as the ladies attempted to enjoy a fashion event at Chadstone. Did you watch the last episode? If you missed it, we have a full and detailed recap right here for you.

On tonight’s episode as per the Bravo synopsis, “Chyka and Bruce pursue an ambitious new building project. Meanwhile, Gina focuses on her photo shoot, and Janet hosts a golf day in a bid to bring the ladies together.”

After that little fiasco with Gamble last week, Janet ended up facing an inquisition for the part she played in spreading all those nasty rumors. And as it turns out Gina might have been right when she began pointing an accusing finger at Janet. Because it seems like those rumors Janet had been mentioning earlier in fact began and ended with her.

Later, when the two women met up for coffee, Gina began their conversation by asking Janet about what happened. Where did these rumors come from and why she did have to bring it up with Gamble? And at first Janet said she was just trying to be a good friend towards Gamble but eventually as the conversation wore on she began naming names. Like Chyka’s for example. Janet blamed Chka for half the things she heard and would go on to repeat.

And yet even with that as her excuse, it appears that Janet actually took creative licenses with what she heard.

No one else used the words like prostitute or stripper. In fact Chykka had jokily said pole dancing but she hadn’t really meant anything by it. So it was Janet that flipped those words around and when Gina called her on it – their lunch was abruptly ended.

Then, afterwards, Janet ran crying to Jackie. Apparently the women were supposed to be shopping for Janet’s upcoming day of golf with her friends. However their shopping trip was as fun as normal.

Janet got teary eyed and naturally Jackie sympathized with her friend. But then when she told Chyka about what happened when they were both out with their husbands – one of the men brought something up. They mentioned that Janet had flirted with Gamble’s fiancée and so the group, at least for minute before they jumped back on Janet’s bandwagon, wondered if Janet had been using those rumors to her advantage.

After all it wasn’t that long ago that Janet had been questioning Gamble and his fiancée’s engagement. If you recall, she mentioned in her confessional that she didn’t think a guy like that would be ok with half the things Gamble was known for.

Thankfully, when golf day did come about, the women tried to stay on their best behaviors. Meaning no one mentioned the rumors or the fighting. They just made side comments about each other’s outfits.

So, for a while, everyone was allowed to have fun.

It seems that like the only person that’s a natural golfer is Gamble and as for the other newbies like Jackie and Gina – their attempts were laughable. But overall it kept the energy high. And if it only stayed like that then maybe golf would have been a success.

However, both Gamble and Janet swore they were feeling tension lying beneath the surface. So rather than ignore it – they decided to get everything out in the open. And that caused at first a bigger fight until eventually a resolution was found. Thanks in large part to Jackie who reminded these women to try and be adults about everything.

You see Janet was angry that Chyka was able to slither out of the argument but then when everyone agreed to never discuss the rumors – in other words if you hear something then keep it to yourself – that was the final nail in the coffin. They weren’t going to argue anymore and they even hugged it out after.

But make no mistake, they’ll forgive yet forgetting is nearly impossible.