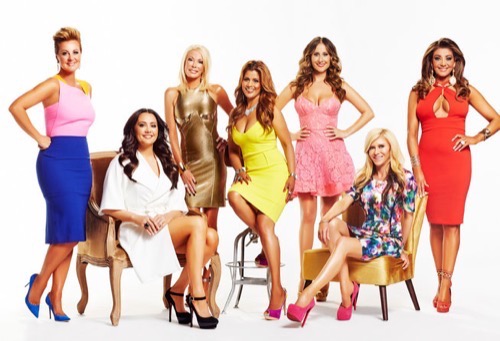 The Real Housewives of Melbourne returns to Bravo tonight with all new Thursday March 5, season 2 premiere and we have your weekly recap below. On tonight’s episode, the saucy Aussie ladies try to put past dramas behind them in the Season 2 premiere.

The Real Housewives of Melbourne is about the lives of driven, well-pampered women in Australia traced in this reality program.  Some familiar faces will be returning: Chyka Keebaugh, Gina Liano, Jackie Gillies, Janet Roach, and Lydia Schiavello are all back on the scene. But they’ll be joined by two new Housewives: dog-loving art consultant Gamble Breaux and business owner Pettifleur Berenger.

On tonight’s episode as per the Bravo synopsis, “The saucy Aussie ladies try to put past dramas behind them in the Season 2 premiere. Also: They attend Janet’s birthday party, but new cast members Gamble Breaux and Pettifleur Berenger shake up the proceedings.”

The ladies of Melbourne are back for a whole new season on tonight’s episode and according to them they’re looking forward to a new beginning. But some at least are being realistic about their future. Janet, for one, knowingly confessed that her relationship with Gina wasn’t going to change. They’re frenemies and though they keep trying to build a bridge – frenemies are what they’ll always be.

And secretly Janet is ok with that. You see she’s about to throw a party and she’s going to invite Gina as another friendly overture so that they could move on from the past. Yet if that doesn’t work out, again, then she knows she can turn to Carlos. Carlos is apparently a new friend of hers and she kind of wants to be something more.

So this party is going to be a way to make nice with more than just Gina. Although Gina did seem happy about her invite over the phone.

The last anyone saw of Gina, most of her friendships with the others girls were strained. So maybe Gina wants to put that all in the past well. She did after all agree to attend to a party where she knew she would run into the old gang. Including Lydia.

Lydia has definitely put the past fights, for the most part that is, behind her and her son’s upcoming marriage has also taken most of her focus lately. Yet her friendship with Gina was important to her. So she knew she wanted to get that back. And unfortunately Gina had told her own sister that her friendship with Lydia was going to be too fractured if they ever made up at all.

Hence, when they ladies later ran into each other; there was obviously some awkwardness. You could practically cut through the tension with a knife because it was so thick. But, then again, why did Gina and Lydia decide to share a car to Janet’s part?

Does that make a lot of sense?

Jackie and Chyka shared a car to Janet’s party and they did because they knew how much they complimented each other. Yet Gina and Lydia’s decision resulted in awkwardness and even after Lydia apologized for some of things she said the last time – there was still tension. And more importantly Gina didn’t bother to apologize as well.

So, for a party that gotten off a really great foot, the addition of those two couldn’t mean anything good.

New girl, Gamble, is a very direct sort of person. So she doesn’t necessarily play the mind games like the others. And she also likes to make up her own mind about people instead of just listening to rumors. Thus, when she met Gina, the two surprisingly got along.

And in fact Gamble didn’t understand why the other ladies were making her out to be something she wasn’t. So Janet, who really wanted to say something more, decided to let Gamble see for herself how Gina can be. And in the meantime the only people that were making a horrible impression was Lydia of all people.

Lydia had apparently taken some of the issues that were in the car also into the party with her. And for someone who missed what happened – Gamble couldn’t understand why Lydia was so defensive.