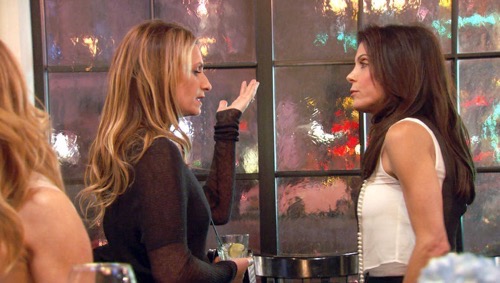 The Real Housewives of New York returns to Bravo tonight with all new Tuesday June 16, season 7 episode 11 called, “Fashionably Fired Up,” and we have your weekly recap below. On tonight’s episode, Bethenny Frankel invites the ladies to decorate cupcakes, and the invitations keep coming as a newly debt-free Sonja Morgan wants to celebrate by inviting all of the girls to Turks and Caicos.

On the last episode, Dorinda’s birthday dinner came to an unappetizing halt with Bethenny and Heather in a screaming match, capping off a conflict-filled Berkshire weekend. Back in New York, Ramona was thrilled to have Avery home so they can reconnect, and Avery surprised Ramona with her adult perspective on the situation between her parents. It’s all business when Bethenny invites Sonja to her brand summit meeting to give Sonja some insight into what it takes to run a successful brand, while Kristen invited Carole to contribute some color and branding ideas for her new nail polish line. Later at Ramona’s party at her new sports bar, AOA, most of the attention of the night was on Bethenny as she navigated conflicts with Luann, Kristen and Heather. Did you watch the last episode? If you missed it, we have a full and detailed recap right here for you.

On tonight’s episode as per the Bravo synopsis, “Bethenny invites the ladies to decorate cupcakes, and the invitations keep coming as a newly debt-free Sonja wants to celebrate by inviting all of the girls to Turks and Caicos. On a shopping outing, Luann and Kristen recap the AOA party, but Kristen gains no clarity and is as perplexed as ever about Bethenny’s actions. Meanwhile, Carole and Bethenny’s friendship reaches odd levels thanks to Carole’s steamy sex dream. Luann has everyone at the photo shoot for her new clothing line where Kristen once again confronts Bethenny–this time about her scheduling issues regarding the Turks and Caicos trip, leaving Bethenny in tears. Later, at Luann’s fashion line party, a protective Ramona goes off on Kristen for upsetting Bethenny.”

Bethenny holds a cupcake decorating party to bond with the women. Ramona shows up with her own wine and glasses.
Sonja says she thinks the women should all go to Turks and Caicos for vacation. Bethenny, who is still suffering PTSD from the group’s last trip, is wary. She says she has never gone on a trip with eight people before and that it better be better than Atlantic City because that was “not enjoyable” for her.

LuAnn and Kristen go shoe shopping, where they discuss the drama at Ramona’s sports bar party.

Kristen says she had wanted to talk to Bethenny when LuAnn cut her off, and LuAnn says it was just the worst time for that. She asks Kristen what the reason was for the drama.

Kristen says Carol told her that Bethenny had called her dumb for choosing the unoriginal title “Pop of Color” for her nail polish line.

LuAnn says in confessional that no matter how hard Kristen tries, Bethenny just isn’t interested and it’s written all over her face.

She tells Kristen to let Bethenny come to her and to let it work itself out naturally.

Carole and Bethenny meet at a restaurant. Carole tells Bethenny that she had a sex dream about her. She says she doesn’t have sex dreams, even about men. She says it was very quick.

Carole says in confessional that she had the sex dream about Bethenny because she wants her to loosen up and the dream was a manifestation of that… desire.

Carole tells Bethenny that she ratted her out to Kristen. Bethenny denies saying that Kristen wasn’t smart.
Bethenny says in confessional that she never called Kristen dumb but may have said that one of her decisions wasn’t the smartest. She says that she didn’t understand why Kristen named her nail polish line “Pop of Color” when someone else has already released one called “Pop.”

LuAnn has created a clothing line, which she is modeling in for a promotional photo shoot.
She tells Kristen that Bethenny is having a problem with the upcoming trip because of the dates. Kristen says she scheduled her own schedule around the trip.

Heather and Ramona also come to the shoot.

When Bethenny arrives at the studio, Kristen brings up the trip, asking if the dates need to be changed. Bethenny confirms that she is leaving early to be with her daughter. She storms off in tears.

LuAnn goes up to her, and Bethenny says she wants a normal life on some level, but there are so many things going on.

When they rejoin the group, Heather tries to comfort Bethenny by telling her they will have a hell of a time and send her home with a hangover. However, Bethenny says in confessional that she appreciates Heather’s efforts but she wants the extra attention on her situation about as much as a cattle prod shoved up her ass.

The women all go out without Sonja, who claims she was sick, but they believe she was hungover.
They discuss Sonja’s tendency to flirt with other people’s boyfriends. Dorinda talks about Sonja being all over John at a party, which she says she doesn’t confront her about because it’s pointless.

At dinner, they continue to talk about these tendencies, which LuAnn describes as “self-destructive.”

Bethenny says she doesn’t want to let Sonja get away with things just because she’s having issues. Ramona says that Sonja is unlike the two of them, who are strong. She says it’s not a matter of her being weak but getting away with murder.

LuAnn says the trip to Turks and Caicos will not be about holding an intervention for Sonja, but it will be an opportunity to get the lowdown on her issues.

Ramona says a counselor told her that if someone has an addiction, you can’t help them and they have to help themselves.

Ramona and Bethenny go to the salon together.

Bethenny tells Ramona that at LuAnn’s shoot she could see in Kristen’s face that she made her sick. She says if Kristen is coming after her, it’s going to be fun.

LuAnn holds a party for her clothing line.

Kristen says she feels like Bethenny is always crying.

Heather says it has to do with her daughter and that she’s broken. She wants to hug Bethenny.
When Ramona arrives, she says she doesn’t think it was very nice for Kristen to come at Bethenny the way she did at the photo shoot. Kristen denies any hostility toward Bethenny. She says that LuAnn was going into makeup and that’s why she talked to Bethenny as soon as she walked in.

Kristen asks Ramona why she is coming for her, and Ramona says she made a conscious decision not to talk to Bethenny about the trip like that. She says she didn’t think she was being nice or sensitive enough toward Bethenny.

Ramona says in confessional that as nice as Kristen is, she can see that she isn’t meshing with the group as well as she would like to.

Ramona says that it doesn’t take a genius to see that she and Bethenny are going through divorces, asking Kristen if she’s “that dumb.”

She says she doesn’t know anything because neither of them tell her anything.

Heather tells Ramona that she is doing the same thing to Kristen.