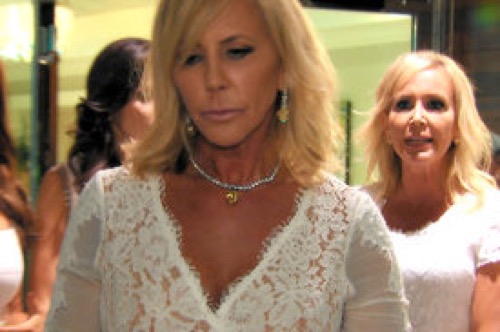 The Real Housewives of Orange County returns to Bravo tonight with an all new Monday October 12 season 10 finale called, “Baptism by Fire,” and we’ve got your recap down below! On tonight’s episode, in the season 10 finale, the ladies gather together to witness Tamra Judge’s baptism, but with the constant questions and confusion surrounding Brooks’ cancer.

On the last episode, Vicki’s daughter Briana visited the OC and met Tamra for lunch with some shocking new information about Brooks. Shannon rekindled her relationship with Heather and which allowed Tamra  to confide in the ladies in a way that she never thought possible. The ladies prepped for Tamra’s baptism in some unconventional ways. Did you watch last week’s episode? We did and we recapped it right here for you.

On tonight’s episode per the Bravo synopsis “in the season finale, the ladies gather together to witness Tamra’s baptism, but with the constant questions and confusion surrounding Brooks’ cancer, Vicki is the one who feels crucified. And after an evening of avoidance, Shannon and Vicki come face-to-face when Shannon discovers that Vicki has committed the ultimate betrayal.”

Tonight’s episode is going to be filled with the usual Housewife drama and you won’t want to miss it, so be sure to tune in for our live coverage of the show tonight at 9 PM EST! While you wait for our recap hit the comments and let us know how excited you are about this season 10 finale episode of The Real Housewives of Orange County.

Tamra is finally holding her baptism and party, the day she says she has been waiting for for over a year. She says in confessional that she is overwhelmed and that she thinks her life and friendships are going to change and that her friends are going to see a side of her they’ve never seen before. She says that Vicki wasn’t at the baby shower because they weren’t in a good place, and she feels bad about that.

Vicki doesn’t want to have any conflict with the other women at Tamra’s baptism, so she avoids them. Meghan tries to approach her and she avoids her. Meghan says in confessional that she thinks Vicki may be concerned people are going to try to uncover the truth about Brooks, but she was just trying to be nice. Shannon, meanwhile, is “angry with Vicki” and thus avoiding her as well. Vicki laments that she ‘thought these women were her friends,’ saying in confessional that she’s the most disappointed in Shannon. She says she has been a good friend to Shannon, keeping her secret, so how dare Shannon do this to her.

Heather says to Shannon and Meghan that they are being dragged into this situation, and that there was a story that Brooks was sick in the middle of the night and Terry came and help him, which didn’t happen. Terry says someone would go to the emergency room in that case and that Brooks has never called him for help. Shannon says that she has also heard the same story. Heather is shocked that someone would lie about something so traceable, and wonders why Vicki would cover for her. Meghan says that if you are sick you don’t have to pay child support, so maybe that – and sympathy – are the reasons Brooks is claiming to be sick.

Meghan suggests they find Vicki before she goes, which Shannon says feels like an ambush. heather asks her what she wants to say to Vicki before Tamra comes popping out, resplendent with job and wanting to take a picture. The group takes a selfie, and looks for Vicki, who says she is going to the bathroom and will be back. Vicki says in confessional that Satan is the author of confusion, that she knows the truth and she is waiting for everyone to stop being confused.

Billy comes to the party, telling Tamra that she hopes he believes Brooks’ story about the cancer. Tamra says she isn’t here to doubt anyone, and that if Brooks is sick she wants him to get better and if he isn’t sick it’s on him. Billy tells her that Brooks has shown him some documents proving that he indeed has cancer. Heather says in confessional that billy is the sweetest person, but it seems like he is being used as a pawn for Vicki and Brooks’ agenda.

Vicki gets ready to go. Vicki comes up while Billy is still talking about the cancer, presenting Tamra with a gift and then telling her they are leaving and have a thing to go to, despite Tamra’s pleas. Shannon tells Billy that Shannon is making a big mistake right now, and that Shannon chose Tamra to show the papers to, not her.

Heather tries to convince Vicki to stay, asking her where she is going. Vicki says there is toxic energy there and she doesn’t want to be around it.

Shannon tells Billy about the shady alleged medical document Tamra claims Brooks showed her, and he says what he saw is a different one.

Heather confronts Vicki on the story about Terry coming to Brooks in the middle of the night with an IV after Brooks called him for help, which Vicki denies. Heather asks why that story would float out there, and Vicki says she doesn’t know, asking why 90 percent of the stuff that’s out there is out there.

Rhonda, Billy’s girlfriend, calls out Shannon by saying she hasn’t been a good friend to Vicki. Shannon says she was the first person who was called about the diagnosis, and that for her even to suggest that she hasn’t been there for Vicki is offensive.

Rhonda says Vicki called her yesterday and she didn’t call her back. Shannon responds that Rhonda hasn’t been there for how Vicki has been treating her the last couple of weeks, including saying she wasn’t a friend, storming out on her and she and Brooks hanging up on her.

Rhonda asks why Shannon would ask for proof of Brooks’ cancer, saying that no one asked for proof of David’s affair. Shannon storms off and tells Meghan and Lizzie what has just happened, saying that “that bitch Rhonda” got what she said from Vicki. Meghan tells Shannon that what Rhonda said is just another form of deflection.

Shannon walks up to Vicki, sarcastically thanking her for being a good friend and not telling people about her past. Meghan tells Vicki that Rhonda said something to Shannon about her husband cheating.

Vicki says in confessional that it’s not like it was a secret, that Shannon was telling everyone about it and she was just telling Rhonda and Billy what was going on with them. She says that this fight is going to be a disaster if she doesn’t leave, and that Brooks has cancer and David cheated and there’s nothing to fight about.

As Vicki leaves, Rhonda tells her the context of what she said and apologizes. Vicki says it’s okay, adding in confessional that she doesn’t mind what Rhonda said and that Shannon was pushing and pushing and got what she deserved.

Tamra and Eddie go outside looking for Vicki. Eddie suggests she and Vicki sit down and talk, and she says no and that she has no respect for Shannon. She says shame on Shannon and that she has been there for her. Vicki says no one has called her and asked how she is doing except Tamra. She says she misses her mother more than anything and wants to go up to heaven to be with her. She says she is really sad and that she knows the truth and these women don’t deserve her. She says she’s not going back in that environment. Tamra says not talking about it is not shutting it down.

Vicki says she doesn’t have to. She says that if they talked about it when she wasn’t there she wouldn’t have to deal with it, but if it’s going to be constant every time she sees these women she is done. Vicki extends her arms out to the sides, saying she feels like Jesus Christ, who did nothing wrong and was nailed to the cross.

Back in the party, Meghan tells Heather, Lizzie and Shannon with certainty that Vicki is lying. Heather tells everyone about Vicki denying the story about Terry coming to Brooks in the middle of the night with an IV, saying Vicki claims she never heard it. She asks Shannon if Vicki was the one who told her that story, and she says yes. Shannon also says that Vicki’s daughter, Briana, told the same story.

Vicki comes up to them, and Shannon confronts her on sharing her personal business, saying she has been nothing but be a friend to her and try to help her. She says she has been her biggest supporter. Vicki says that when no one liked Shannon, she was there for her.

Vicki storms off as Shannon says that she has been nothing but a friend to her and she has dragged her into a story that makes no sense. Vicki says that’s because she doesn’t know, storming off.

Tamra continues trying to prevent Vicki from leaving the party. Tamra brings up Brooks’ alleged PET/CT scan at Newport Imaging, who told Meghan that they don’t perform the scans there. Vicki says she wasn’t there, she was in Oklahoma, and they can do all the detective work they want to do.

Rhonda asks Tamra what the benefit is to lying that you have cancer. Tamra says she doesn’t know, and that the story came from Briana. Vicki says Briana is a shit starter and will do anything to tarnish Brooks’ image, which Tamra says isn’t true.

Vicki says she isn’t running, she is actually walking with her head high, and that she feels like she has been baptised tonight. She says she is going on a new path and this isn’t it.Brooks has dumped Vicki and is moving to Florida.

Meghan and Jimmy are together more often now that Hayley has graduated high school. He has bought a home in the OC where he spends half his time.

Shannon and David continue to go to counseling to work on their marriage.

Construction on Heather and Terry’s new house is behind schedule and over budge, so they won’t be moving in for a year. Terry is now working on two TV shows and is as busy as ever.

Tamra is still a practicing real estate agent. Eddie isn’t getting into religion with her but he is praying that Tamra’s son Ryan repays his loan.