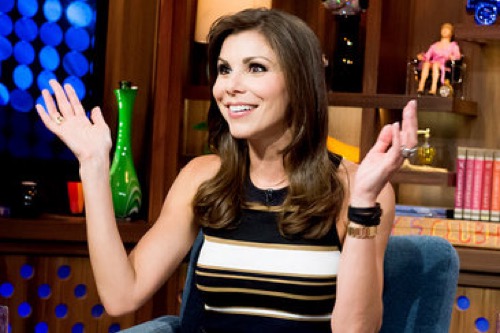 The Real Housewives of Orange County returns to Bravo tonight with an all new Monday June 29 season 10 episode 4 called, “Charity Case,” and we have your weekly recap and spoilers below! On tonight’s episode, a trip to Napa concludes with tensions at a high. Back in the OC, Vicki and Brooks consider some unconventional cancer treatments.

On the last episode Heather and the ladies traveled to Napa to celebrate the launch of her new sparkling wine Collette. OC transplant Meghan was excited for her first trip to wine country, but was also apprehensive after her recent run-in with Shannon. Shannon continued to struggle with her emotions regarding her husband David’s affair. Also, Tamra revealed her newfound relationship with the lord while also trying to draw some much needed attention to her new boobs. Did you watch last week’s episode? We did and we recapped it right here for you.

On tonight’s episode per the Bravo synopsis “a trip to Napa concludes with tensions at a high. Back in the OC, Vicki and Brooks consider some unconventional cancer treatments, Meghan puts the final touches on her first OC charity event while Heather faces the harsh reality of going over budget on her dream home. Meanwhile, Shannon receives some shocking news and unresolved issues between her and Meghan become the topic of the ladies’ scrutiny at Meghan’s JDRF charity event.”

Meghan tells Shannon that she came to her looking for help with the charity because she heard about her involvement in it.

Shannon storms off, telling Meghan not to try to paint her as uncharitable. Heather approaches Meghan and sits down with her, agreeing to go talk to Shannon on her behalf.
She knocks on the door of the room where Shannon is.

Shannon is crying, saying it’s a long story and she doesn’t want to be ambushed. Heather says she just wants Shannon to feel better.

Meghan tells Shannon she is really sorry about whatever she said and that she didn’t want it to end that way at all and feels awful.

Shannon says she doesn’t want to be ambushed and that she goes above and beyond for people. Meghan says that doesn’t show, and that Shannon didn’t even respond to her text message.

Shannon says she’s offended that Meghan claimed someone gave her her private phone number when that wasn’t true. She says she has a private cell phone number, and Meghan scoffs at that, saying Shannon isn’t some big to-do.
“Had I known that I was getting a call–”

“You would have been nicer? I never know when I’m going to be called about charity, do you?” Meghan addresses the group of women.

Shannon sarcastically says that she is sorry and she will be there for her next time. Meghan smiles, saying that didn’t sound very genuine.

Meghan is setting up an event for JDRF (Juvenile Diabetes Research Foundation International), the first charity she ever started working with. She says in confessional that the event is important not just for the charity but for the fact that this is basically her debut in Orange County.

Heather continues work on her brand new house. She says in confessional that it is hard not having Terry there sometimes, but he isn’t out playing golf or hanging out with the boys, he is working. She finds out that she has to write a check for another quarter million on the project.

Vicki, Tamra and Shannon go to dinner together. Shannon tells them about the fiasco with Meghan. She says the party she hosted for the same charity is different from the one Meghan is hosting and raised three times as much money.

Shannon says she never received an invitation but has been getting texts from people asking if she will be at Meghan’s party. Vicki also says she didn’t receive a formal invitation to the event.

When asked if she got an official invitation, Tamra says that Meghan did call her today. She reveals that Meghan said she isn’t inviting Shannon.

Vicki says if Meghan is going to pull that, she isn’t going to go either.“This is what 30-year-olds do,” Shannon says. “They don’t think it through.”

Heather goes over to Meghan’s house. She tells Meghan that it is a charity party and Shannon knows a lot of people who may be coming, so it may be awkward if she doesn’t come. She says it may turn into Defcon 4 if Shannon isn’t invited.

Meghan says she thought it all through, and she thinks because the fight happened so recently, Shannon needs time to cool down. She says that as she told Tamra, she doesn’t want to exclude Shannon but she thinks Shannon is excluding herself with her behavior.

While getting her makeup done, Tamra urges Vicki to go to the charity event, but Vicki says she is going to text Meghan and ask her if she would be offended if she took Shannon out tonight.

She calls Meghan and says that she knows Shannon wasn’t invited, adding that she had gotten makeup and hair appointments and a dress ready. She tells Meghan wants to take Shannon out for dinner tonight because she feels bad.

Meghan says she thinks Shannon has done this to herself, and that she doesn’t want to get in the middle of this.

Tamra arrives at Meghan’s party, and Meghan says she was wondering if she would show up given what’s been going on.
Tamra says this isn’t her argument and if she says she’s going to be somewhere she will be there.
Meghan says she wants to sort everything out and she doesn’t want to look like a mean girl. Tamra says that Meghan has been fabulous to her.

A couple of Shannon’s friends, including Lizzie, are already mad that Meghan didn’t invite her to this party. Lizzie says this is an insult and that Shannon knows half of the people at this event. She says in confessional that she knows Shannon wouldn’t come to an event like this and start trouble.

Shannon and Vicki hit the bar together. Shannon says she doesn’t know what mistake she made with Meghan to make her want to treat her this way. She tears up, saying this is minute in the scheme of her life and she has too many other things going on in her life to be concerned about this.

Heather and Tamra discuss the situation, and Heather says that Vicki is doing the same thing Meghan did by refusing to go to the party and hanging out with Shannon instead.

Meghan walks over and sits down with them. She says she wants to work it out with Shannon and be in a good place with her, she just wants to know if Shannon can handle herself.

Back at the bar, Shannon and Vicki discuss Meghan’s entitled attitude due to her recent marriage.

Shannon receives a call from Lizzie, who says she is going to go to the bar to see them.

Tamra texts Vicki, and also decides to leave the event and meet the women at the bar. She tells Meghan this, and she says she is fine with it.

Meghan says in confessional that she chose not to invite Shannon to the party, and she can deal with the consequences of that.