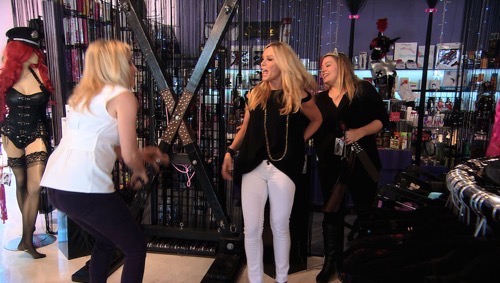 The Real Housewives of Orange County returns to Bravo tonight with an all new Monday June 8 season 10 premiere episode called, “Under Construction,” We’ve got your recap down below! On tonight’s episode, Vicki Gunvalson shares big news about her boyfriend in the Season 10 opener.

On the last episode the women gathered at Vicki’s for a post Bali dinner party and with leftover tensions from the trip still running high, the ladies laid everything on the table. Tamra came face-to-face with Brooks, and an apology from Shannon’s husband David sparked an unexpected fight. Meanwhile, Vicki’s daughter Briana and Tamra’s son Ryan officially said goodbye to the OC, leaving their mothers in tears.

On tonight’s episode per say the Bravo synopsis “Vicki shares big news about her boyfriend in the Season 10 opener. Also: Heather focuses on building her dream home; Shannon and David work on repairing their marriage; and new housewife Meghan King Edmonds is introduced.”

Heather is happy with living in a temporary home as she and her husband Terry wait for their new house to be done. She is largely controlling the building of their new house as Terry has been working more than he ever has been.

Vicki and Shannon meet up at a restaurant. Vicki tells Shannon that her man Brooks is living in the house now, which her daughter isn’t happy about because she doesn’t think she picks good men. She says that people can grow, saying David and Shannon are a perfect example. She says it’s really nice to have someone who cares about you.

Tamra wants to get breast implants again. Sarah, her son Ryan’s fiancée, calls her and updates her about her pregnancy, which is almost over.

Heather and Terry go to get dinner with Jimmy Edmonds and Meghan, his third wife.

Vicki is concerned about Brooks’ health. He has chemo coming up. In confessional, she briefly comments on the allegations made against Brooks, claiming that he is lying about having cancer. Vicki asks what a cancer patient is supposed to look like.

Jimmy, Meghan and Jimmy’s daughter go out to dinner. Meghan asks Jimmy where his wedding ring is, and he says he’s lost it. She says he doesn’t lose things and he hasn’t had his ring for about two weeks. When she says she thinks he should have found it by now, he says that he hasn’t looked for it.

Meghan says in confessional that she had her own successful career before meeting Jimmy, and she didn’t know that she would be living with a stepdaughter who borrows her clothes and is closer in age to her than she is to her husband. She also says that their relationship redefines the idea of love.

Shannon and her husband go on a couple’s retreat, which she hopes will solidify his commitment to their marriage.
At the retreat, she explains why they are there: she says she is on a quest to be a more peaceful person because she gets angry. She says she’s getting there, but has a long way to go. David says his knee-jerk reaction to her getting angry is to go away. Shannon brings up David’s affair, tearing up immediately.

She says in confessional that she caught her husband whispering to someone on the phone and she just knew something was wrong. She also says that divorce is not and has never been an option for her, that she loves her family and will do anything to keep it together. She says at the retreat that she was called crazy when she initially brought up her suspicions.

Vicki is trying to keep Brooks’ cancer out of his mind by constantly engaging in different activities.

Tamra holds a baby shower for her daughter-in-law, Sarah.

Vicki tells Brooks that she doesn’t trust Tamra because she didn’t talk to her after she first told her about her husband’s cancer. She says she wants to trust her and that they are sort of like sisters to each other.

At the shower, Tamra tears up about the fact that Vicki of all people isn’t there to support her. She says that Vicki didn’t support her in the past. In confessional, she says that they have both hurt eachother, but with Brooks getting cancer and herself becoming a grandmother, the two of them should be there for eachother as friends.

At the couples retreat, they are asked to talk about their pasts. Shannon says that her childhood was full of lies and infidelity, and that she had to keep those secrets because no one could know.

In confessional, she says that she was so preoccupied with the misery in her own marriage that she didn’t pay as much attention to her kids as she could have. She says that she is worried that she and David’s actions may affect their children the way their parents’ actions affected them. She also shares that the kids found out about the affair, which she feels guilty about because they weren’t supposed to find out.