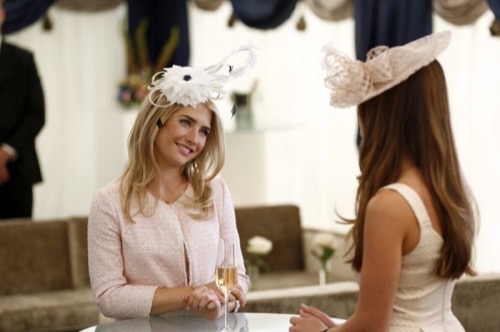 The Royals continues tonight for an all new Sunday, March 22 season 1 episode 2, called “Infants of Spring” and we have your weekly recap below. On tonight’s episode, Prince Liam [William Moseley] is reunited with his ex-girlfriend Gemma [Sophie Colquhoun] at the annual garden party.

On the last episode, in the series premiere, Prince Liam and Princess Eleanor struggled with their new roles following the abrupt death of their older brother, while Queen Helena worked to maintain the family’s image, and King Simon questioned the monarchy’s future.

On tonight’s episode as per the E! synopsis “Prince Liam is reunited with his ex-girlfriend Gemma at the annual garden party. Elsewhere, the Queen and Cyrus work to counteract King Simon’s wishes.”

Tonight’s episode of The Royals kicks off with Helena taste-testing food for a party she is throwing. Price pays her a visit to warn her that they have received a death threat on the Queen – Helena doesn’t want to hear it, she says that the only threat to the monarchy is if Price’s daughter “keeps blowing her son.” Meanwhile, there is a ruckus in the Palace – the guards are trying to throw out Liam’s ex Gemma. Marcus tries to explain to her that she has been taken “off the list.” Liam and Ophelia walk in and Gemma rushes to greet him and says that she has missed him. Liam and Ophelia both seem shocked.

Gemma introduces herself to Ophelia as Liam’s girlfriend – Liam clarifies that she is actually his ex-girlfriend. Ophelia excuses herself and is obviously upset. Meanwhile, Helena tracks down Simon and tells him that she wants Price fired because his daughter is seeing Liam. Simon rants that he is not firing the chief of staff because Liam has a crush. Simon grumbles that he is not in the mood and she shouldn’t be throwing a party either – she should be mourning her son’s death.

Gemma gets dressed and teases Liam about his new girlfriend – Liam says that aren’t together, they are just hanging out. Gemma insists that she came back because she missed him, not because he is now next in line to the throne. Liam scoffs that she is the one that broke up with him. Gemma storms out and Liam finds Ophelia and apologizes for his ex.
It’s time for the Queen’s garden party – she plans to try and woo everyone invited and convince them not to abolish the monarchy. Helena lectures her family on behaving appropriately and not embarrassing her – she reveals to Liam that she invited Gemma because it will make for a great photo-op. Price gives the Royals stern orders to stay close to security and be smart around the crowd.

The Royals head out in garden and there are crowds waiting for them behind the ropes. Liam decides to stick it to his mother and dives in to the crowd and begins crowd-surfing. Marcus jumps in after him to try and get him out, Helena watch in horror. Afterwards Cyrus corners Liam and rants to him that he is a “daft little prick,” and he is squandering away the greatest crown in the world for pints in a pub and commoner girl.

Gemma corners Ophelia at the party and brags to her that she is the heiress to a diamond cartel, Gemma makes it very clear that she isn’t worried about the “girl next door” winding up with her Prince. Helena continues to make her rounds and greet everyone at the garden party – she meets a soldier named Captain Lacey and thanks him for his service. Chancellor of the Treasury, Winston interrupts and scoffs to Helena that he has heard rumors of the monarchy being disbanded. He teases that Helena won’t know what to do without the people’s money. She brags that she doesn’t need the people’s money because Liam is about to marry Gemma – an heiress to a diamond cartel.

Eleanor spots an Olympic Gold Medal swimmer at the party – Jasper warns her that they are on high security. Princess Eleanor ignores his warning and begins flirting with the swimmer. Jasper demands to know what the hell she is doing. The Princess reminds him that technically he is just her bodyguard – and he is only allowed to speak when spoken to, and it is none of his business who she flirts with or sleeps with. She taunts him that his accent is slipping – and soon everyone is going to know that he is a fraud.

Ophelia challenges Gemma to a drinking competition – they polish off a bottle of whiskey together and Ophelia loses. She stumbles outside and passes out in a flower bed. Liam finds her and helps her to her room. Ophelia doesn’t understand how he could have ever dated Gemma – he confesses to her that Gemma was his “first love.” Ophelia throws up on the floor and runs in to the bathroom mortified. After she is done throwing up Liam tries to lighten the mood, Ophelia confesses that she was upset that Liam invited Gemma to the party. He reveals that he didn’t invite Gemma and he didn’t want her there, his mom invited her.

Princess Eleanor invites the swimmer to her room – much to Jasper’s dismay. She invited him inside – Jasper asks the swimmer to take a photo with him before he goes and has sex with the princess. He agrees and leans in and Jasper chokes him out and he slumps to the floor, passed out. Eleanor shouts that Jasper has to stop doing stuff like that – and marches in to her room and slams the door.

Liam asks Ophelia to go out on a real date with him – not just to get coffee or to the pub. Ophelia turns him down and says that she is “not posh and she doesn’t own a designer dress” – and it just wont work out between them. She tells Liam that for what it is worth – she thinks that one day he will make an amazing King.

After the party Helena rants at Price about his daughter causing a drunken spectacle at the party as he walks her to her bedroom. He offers to come in and check for any security threats – she turns him down and goes to her room and shuts the door in his face. The Captain from the party is waiting for her – they share a passionate kiss and he tells her that he loves her, and then he slips out a secret door n her room.

Eleanor finds Ophelia sitting outside – she brings her a drink and tells her that it is a day drinking remedy, Ophelia gags as she tries to drink it and Eleanor announces that she needs her help with something. Meanwhile in the kitchen one of the servants takes a gun out of her bag – it looks like she is the security breach. Liam visits his father and confesses he was with Ophelia – he says he wants the crown and love and there is no reason he cant have both. Liam tells his dad that he knows he is going to be a good king one day and asks him for a chance – the King agrees.