BY Kristine Francis on May 10, 2015 | Comments: one comment
Related : Recap, Television, TV 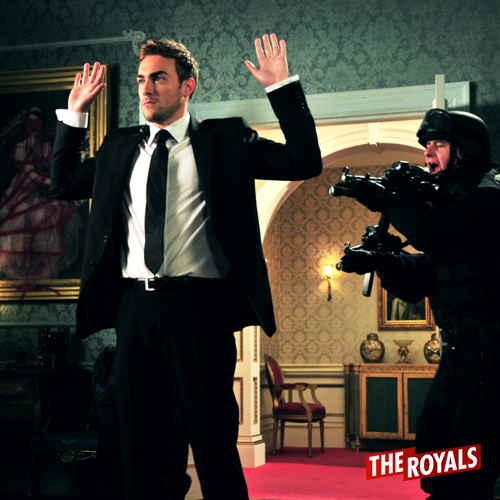 The Royals continues tonight an all new Sunday, May 10 season 1 episode 9, called “In My Heart There Was a Kind of Fighting” On tonight’s episode, Prince Robert is visited by someone from his past.

On the last episode, an assassination attempt put the royal family on lockdown inside the palace safe room. Did you watch the last episode? If you missed it, we have a full and detailed recap right here for you.

On tonight’s episode as per the E! synopsis “Prince Liam and Princess Eleanor confront their inner demons when someone from Prince Robert’s past arrives for a visit.”

The DNA test results are back and, boy, did they come with aftershocks. Apparently the royal twins are not royal. There’s not even an ounce of the King’s blood in them. So on tonight’s all new episode of “The Royals” there’s bound to be a reckoning

See, no one actually knows why the Queen allowed herself to be scrutinized this way. It’s not as if she can walk away from such scandal unscathed or for that matter be seen as the same revered Queen of old. But now that she’s aligned herself with Cyrus, there’s no turning back for her.

And she’s just going to have to see this through to the end.

Though, to be fair, the end is looking bleaker by the second. Both Liam and Eleanor have been removed from the line of succession. And Cyrus is Regent. For now at least. But don’t be surprised if the King’s condition takes a turn for the worse.

Cyrus is technically the Prince Regent. However he prefers to be known as King Cyrus, around the palace, and he especially enjoys it when the staff refer to him as “Majesty”. As for his daughters, they couldn’t wait to be heiresses.

Their much adored cousins were instantly bastards in their eyes and, oddly, they instantly felt insulted that for years they had to bow to people that didn’t deserve it. So when they learned the results of the DNA test, they were as happy as they can be. And the only thing that would have made the news sweeter was if their father suddenly dropped dead.

So there’s not a lot of love lost in this family and it seems that Robert was just another casualty. Because, after months of speculation that is, the Queen finally revealed what really happened with her firstborn. And sadly the big secret everyone was trying to hide was that Robert had killed himself.

And Eleanor began to blame herself the moment she heard.

Before her big brother had committed suicide, Eleanor it seems was supposed to call him. Yet she forgot all about it after a heavy night of partying. So naturally there’s a part of her that wonders if she could have changed his mind if she had been there to talk him through whatever was wrong.

But depression doesn’t work like that and, truthfully, there’s no guarantee that Robert would still be alive if he had help. And once she saw how much she had hurt her daughter, Queen Helena finally began to think about her children as more than pawns.

She had hurt Eleanor and for what? A title! A title that won’t necessarily mean anything when there’s a new King in play. And what about when his own daughters take over? The Princesses Penelope and Maribel were considered the bane of the monarchy for years.

So before she sat back and watched a beloved institution waste away, Helena chose to change allegiances.

Her children have been stripped of their royal protection officers, Liam was god knows where, and in the meantime Cyrus was slowly removing all of the twins’ privileges. Plus going as far to keep Eleanor away from King Simon. Thus something had to be done.

And as for her own personal PR nightmare, Gemma was surprisingly helpful.

Gemma came back and it looks like she still cares about Liam. And that’s in despite of his changed status. So at the moment Gemma is actually very supportive. She’s willing to help the Queen protect her family as best as she can. And she’s giving Liam space which is what he needs.

If he didn’t then he wouldn’t have cut himself off from everyone that’s concerned. Liam hasn’t contacted Ophelia and although his girlfriend is still searching for him – he couldn’t be bothered answering his phone. Or accept Marcus’s help when the other man offered it.

So leaving him to work out his demons is for the best. And as for the danger that’s been lurking around every corner since the King was stabbed; the odd man out that had mysteriously showed up on the security footage later approached Eleanor.

And not only did he tell her that he killed Robert but he also alluded to someone pulling his strings.