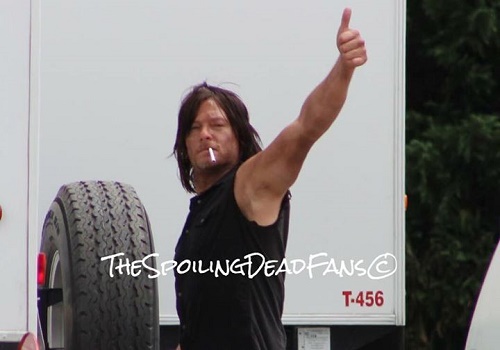 The Walking Dead season 6 spoilers are revealing a ton of action, but first, we explain those rumors centering around two major characters being killed. Daryl and Michonne’s deaths are debunked, while we expose some of the details of the Alexandria invasion and confirm Enid’s secret will be exposed.

Some reports claim Norman Reedus has not been seen on set. Those reports are inaccurate. Celeb Dirty Laundry can confirm that Reedus, who plays fan-favorite Daryl Dixon, has been on set. In fact, he and his bike his character salvaged during season 5 are both alive, well, and filming. Reedus was spotted with Andrew Lincoln (Rick Grimes) on May 20 outside the walls of the Safe Zone, and on May 21 heading into Alexandria. The Spoiling Dead Fans obtained photo proof, which you can see for yourself above.

Michonne, played by Danai Gurira, was another character fans began to worry about after inaccurate reports stated she was absent from set. CDL can confirm Danai is still filming, and was recently spotted filming in her usual gear on May 22. Abraham, Michael Cudlitz, was also seen in two different filming areas.

The set also reveals Rosita, Eric, Spencer, Aaron, Carol, Maggie, Eugene, Morgan, and even Tara, have all been regulars on set. The possibly doomed Father Gabriel has been prevalent during filming, but we’ve covered his possible exit. It was confirmed Spencer was seen shooting from the tower into the Safe Zone, which could be a huge sign. If Deanna’s oldest son is taking shots from the tower, that could mean the first battle Alexandria will see is being filmed.Note that just because the actors are on set now, it doesn’t means their characters are “safe” the entire season. Another spoiler that has caught TWD fans’ attention is the amount of fire, smoke, and even charred remains of a building that has been filmed in and around Alexandria. Something HUGE is going to go down inside the walls of the Safe Zone.

It appears someone, most likely the Wolves, used ropes to infiltrate Alexandria. New faces were seen scaling up the walls, followed by Morgan’s stunt double. Rick, Norman, Carol, and Maggie then followed in the scene, armed and shooting. A random Alexandrian stunt man was filmed going over the wall while ON FIRE last week.

Enid’s character has been an enigma. During season five of ‘The Walking Dead’ her character had some great scenes with Carl, and piqued fans interest by sneaking out of the Safe Zone and disappearing on multiple occasions.

Strong theories suggest Enid is in league with the Wolves as a spy on the inside and it appears Enid’s secrets will finally be revealed in the early episodes of TWD season 6. A few scenes being filmed showed Enid with an older man and a woman. Their car is attacked by walkers, and a dummy head was seen on set. Could this be Enid’s backstory that reveals how she became an orphan and made her way to the Safe Zone? It’s a strong possibility we will finally know how Enid’s parents met their grisly end.

Which of ‘The Walking Dead’ characters do you think will die in season 6? What do you think of Enid’s possible spy storyline? Let us know in the comment section below!