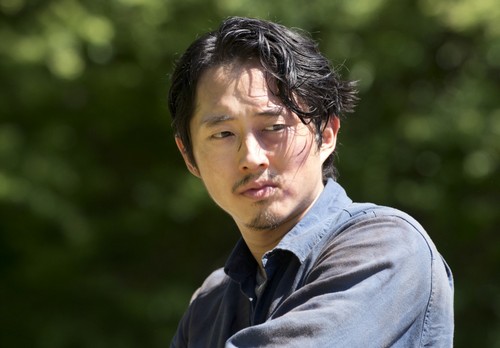 Thanks to The Walking Dead season 6 spoilers, we all knew Glenn Rhee was alive, but Glenn’s faked death is coming with a bit of a backlash. In addition to the big reveal of Glenn’s fate, we have also learned who was behind that mysterious SOS, as the call for help has been revealed.

Finally, after weeks of waiting and debating – it’s official. Glenn Rhee is alive. As CDL covered, Glenn’s death scene was filmed and promoted to be the end of everyone’s favorite pizza boy turned apocalyptical badass.

Indeed, as I promised, it was Nick’s body we saw being devoured by walkers – not Glenn who shuffled under the dumpster to wait out the herd. In season 6, episode 7 titled ‘Heads Up,’ fans saw a new angle of the scene that revealed Glenn’s escape.

However, some are wondering if that stunt jumped the shark. Most are irked with the decision to “pretend” to kill Glenn and then let fans break the internet wondering whether or not the show just killed a fan favorite character.

The buzz was intense and if the show was looking to pull a stunt worthy of Kardashian in order to garner attention – it succeeded. However, most critics and fans feel the lousy dumpster hideout was lame and just lazy, especially after building it up for weeks.

Beyond Glenn, the show is attempting keep audiences hooked with baiting moments. During the Daryl-heavy arc in which Dwight was finally introduced, the sixth episode closed with Daryl, Sasha, and Abraham hearing a call for help via a radio.

The voice was pretty obvious thanks to its monotone nature, but it has been revealed the mysterious call from help came from Eugene.

The show’s bouncy timing with flashbacks has been jarring for some fans. This is another one of those moments that make the show’s pace hard to follow as showrunner Scott Gimple plays with multiple story arcs and enjoys toying with time. Eugene’s call for help could be the preface to the walkers invading Alexandria according to The Spoiling Dead.

What did you think of Glenn’s fate finally being revealed? Did The Walking Dead make a lame move with the dumpster getaway? Is Eugene’s call for help the signal the walkers have finally broken down the walls of Alexandria? Let us know your thoughts in the comment section below and, as always, stay tuned to CDL for more spoilers and news for The Walking Dead.