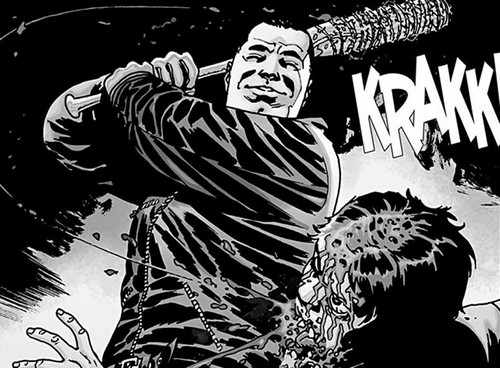 The Walking Dead season 6 spoilers reveal lots of exciting details about what to expect on our favorite zombie apocalypse show. ‘The Walking Dead’ season 6 has begun filming, and spoilers are slowly coming from the set, crew, and lucky insiders. Details like Daryl Dixon’s possible story arc, how Alexandria will play into the future of the show, and new characters all lay out the foundation for the upcoming season of TWD.

AMC’s zombie infested thriller wrapped season five with a few twists that left viewers baited. CDL has covered one of the most anticipated returns, Morgan. The man who saved Rick’s life in the beginning of the zombie apocalypse finally reunited with his old pal in the last minute of ‘The Walking Dead’ season five finale. Whether not Morgan will be a large part of the story from now on was teased, but it appears Morgan will be sticking around for a while. In season 6, expect a new dynamic as Morgan has changed (possibly into a Jedi Master) and Rick has hopped on a new crazy train.

Daryl Dixon is one the principal characters who fans can’t get enough of. Rick’s second-hand man survived season five, but Daryl is the constant source of rumors regarding major character deaths on TWD. Norman Reedus lovers might be comforted by a rumor involving the book version of ‘The Walking Dead.’ Daryl’s character is not in the comic books, so his fate is completely a mystery…BUT it’s a strong possibility Dixon is based on comic book character, Jesus. Also known as Paul Monroe, the survivor resides in a community called the Hilltop Colony as a recruiter. After initially mistrusting Rick, Paul become Rick’s loyal ally. As of the current issue, Paul is still alive. Perhaps we might see Paul’s character worked into the show, or maybe Dixon will continue filling the gap?

More zombies. If you’re a fan of the roots of the TWD, get ready for a walker-heavy season. Greg Nicotero dropped a huge hint regarding the walkers and their part in season 6, explaining, “You have people that are basically utilizing the people that they kill as ammunition to build a zombie army…they are setting booby traps everywhere so they can take people’s possessions and then use them to build the walkers in the traps. So it’s kind of a diabolical plan.” Scott Gimple also confirmed walkers will return as a bigger threat after teasing the upcoming season with a statement issued to ‘The Talking Dead.’

The Wolves will also return, most likely for the front of TWD season 6. Their appearance was teased for the back-half of season five. Most seem to focus on the appearance of Negan, which might be a possibility, but don’t expect to meet the uber-villain until later in the show. Producers would have to skip a hefty chunk of great material from the graphic novels to get to Negan and his Saviors, but it’s not out of the question. While the show seems to stick to the book, it’s never been to the exact letter.

Alexandria will be a focus for season 6. It will be refreshing from past seasons of the group roaming, and the Safe Zone will be home to Rick and his group for a larger chunk of time. Location manager Michael Riley, revealed the group will remain in Alexandria for the bulk of season 6. Aerial set photos support the claim as new houses have been built for the set. Even the protective wall has been extended.
Two new characters will be added to the mix according to Master Herald. Delvin, a “twenty-something African-American cynic,” will join the cast for season 6 of ‘The Walking Dead.’ The report added Delvin isn’t all negative, and has the ability to see that people can still be decent. Another man named Tucker will also reportedly join the TWD cast. Tucker “values fairness” and both men are believed to be Alexandrians. Those additions are joined by a new season 6 regular, Ross Marquand, who is Daryl’s new friend, Aaron.

No official date for the premier of ‘The Walking Dead’ season 6, but we know it will be in October. Stay tuned for more The Walking Dead Season 6 spoilers, details, and facts!