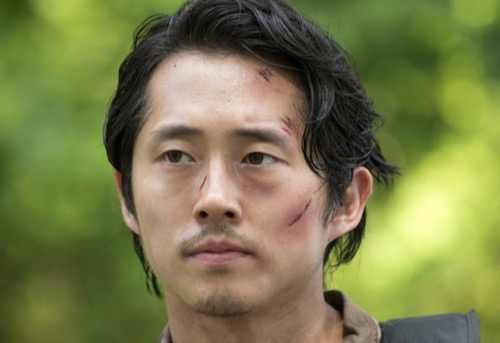 Thanks to The Walking Dead spoilers for season 6, there is proof that Glenn, the major character, is alive. Steven Yeun, who plays Glenn on TWD, was spotted filming at the Hilltop colony. Fans of AMC’s apocalyptic zombie drama were left wondering if one of the principal characters was brutally killed off.

Glenn, who is one of the 3 characters who has been around since the first episode of ‘The Walking Dead,’ appeared to be brutally torn apart by a herd of walkers in last week’s episode. We have a full recap and details here on Celeb Dirty Laundry, along with the details on how Glenn could possibly survive his portrayed death.

Along with the fact that Glenn has appeared on set and filming with characters that have not yet been introduced, Yeun is credited with involvement for the entire season on IMDb. Of course, that could change, but proof of Glenn’s survival has come.

Steven Yeun has been spotted filming at the Hilltop Colony. The upcoming plotline, which vaguely follows the graphic novels in true TWD fashion, will have Rick and his company discover The Hilltop thanks Paul Monroe a.k.a. Jesus.

Steven has also been spotted filming scenes with Paul – who hasn’t made his debut in the story yet. Some claim Glenn’s future scenes will all be flashbacks; Scott Gimple even hinted at it with a statement issued to ‘The Talking Dead.’ However, the group hasn’t arrived to the Hilltop Colony…yet.

In the graphic novels, Paul leads Rick and several members of the group to The Hilltop. This event is a major segway to Negan’s arrival, and will happen in the show. Photos of the Hilltop Colony set hit a few weeks ago, and now filming as begun – Glenn and Paul present and working. You can bet this will happen in the latter half of the season, and chronologically speaking, it would be impossible to do as a flashback.

As for an immediate gratification clearing up Glenn’s possible death – fans will have to wait. This Sunday’s episode entitled “Here’s Not Here” will focus entirely on Morgan and his backstory. Fans will finally found out where and how he learned those crazy skills with his stick of righteousness.