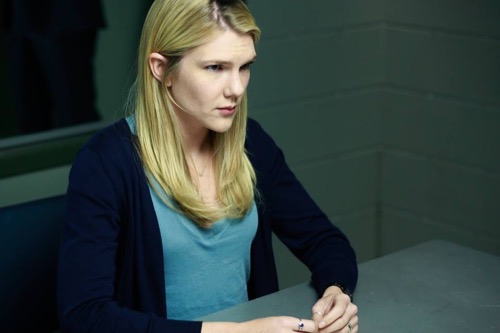 Tonight on ABC The Whispers airs with an all new Monday June 29, season 1 episode 5 called, “What Lies Beneath.” and we have your weekly recap below for you. On tonight’s episode Claire [Lily Rabe] tries to jog Sean’s [Milo Ventimiglia] memory about their past life together; an epiphany sends Wes [Barry Sloane] back to Mali to re-inspect the fulgurite; and Lena keeps a close eye on Minx [Kylie Rogers] to see if she is still conversing with Drill.

On the last episode, Sean held Dr. Maria Benavidez hostage as an unknown entity continued to blindly lead him to an undisclosed location, and Claire and Wes further their investigation into Sean’s past whereabouts and began to uncover what his next target was. Did you watch the last episode? If you missed it, we have a full and detailed recap right here for you.

On tonight’s episode as per the ABC synopsis, “Claire speaks with Sean, who has no memories of her or their life together, and tries to get him to remember something… anything about his past; Wes has an epiphany and heads back to Mali to take another look at the fulgurite, and Lena keeps a watchful eye on Minx to make sure that her conversations with Drill have ceased.”

Tonight’s episode looks like it is going to be great and you won’t want to miss it, so be sure to tune in for our live coverage of ABC’s The Whispers at 10:00 PM EST!

Evidently, someone caused a nuclear meltdown in order to contain it. So the government can’t afford to wait around and merely look for answers on tonight’s episode of “The Whispers.” It seems they’re actually willing break Sean because that’s how bad they need them.

According to all the statics, what happened at the nuclear power plant could one day result in four Hiroshimas.

Hence the feds have to look at the explosion as someone gearing up for an eventual attack. Otherwise what happened just doesn’t make sense in their eyes. For it’s not like nuclear explosions have ever disappeared into thin air before.

Anyways, when all else fails the feds will naturally fall back on it being one terrorist attack. It’s the only logical thing they can think of. Plus, this time, they have the perfect person to fit their terrorist criteria. Sean was once one of their own but after he disappeared on an overseas mission he then reappeared and suddenly began speaking foreign languages.

So really Sean is the perfect patsy. Yet there’s one problem with labeling as an enemy of the state. For it seems that Sean is just as clueless as the rest of the adults. As in he was never informed about the next stage of the plan. Nor did he know what the plan was when he was acting as an unwilling participant.

The one leverage that Sean has is that he can sometimes sense Drill. And that’s how he knows that whatever is happening is far from over. He even told Wes so and Wes knew the real Sean, the one that was married to Calire, wouldn’t have cared to warn him.

Right before he left, Sean had found out about Claire and Wes and it appeared to have been the reason why he chose to take the mission.

And with that plaguing him, Wes decided to do his best in order to protect his family. He later told his wife to pack up their daughter and go to her parents’ place. He figured there would be safer than with him.

Yet his wife fought him on that decision. Lena said that her place was with him and that she couldn’t leave him to whatever it is alone. Though that’s what he ended up having to do.

Wes found a correlation between Sean and that thing he found out the desert in South Africa. At first glance it had looked like a rock formation but after he spent some time thinking about it (and how it was the exact image of Sean’s heart rate during their conversation) then that’s when it all became clear. Wes knew that seemingly safe formation could very well have something quite sinister underneath it.

Earlier, Wes’s assistant had given him the idea of the volcano. It seems he had overheard her on the phone with her son who had needed help with his science project. And that’s just when it clicked for him.

So Wes hopped on the first flight out too see if his theory made any sense and he left Sean to Claire. Sean had apparently forgotten everything about himself. From his name to his complete family history. And so Claire believed she would have better shot at him if only she could get him to remember her.

And the plan worked. Sean didn’t remember her but knowing that he was speaking to his wife (in addition to have proof of that) did help him to open up.

Sean told her about everything he possibly could. He mentioned when he woke up in a strange place and he told her about his tattoos. Sean is completely covered with them and they weren’t there the last time she saw him.

So they worked together and they connected each tattoo to separate disasters. However there was one tattoo that hadn’t resulted in anyone getting hurt. And Claire knew she had to investigate it.

But her investigation somehow led to Wes’s assistant.

Her little boy said that Drill told him to call his mom at an exact time. He didn’t have to do anything else besides ask her question about his project. And by time Claire put the pieces together – it had already been too late.

Wes went to Africa and unearth something the local government were all too happy to hand over.