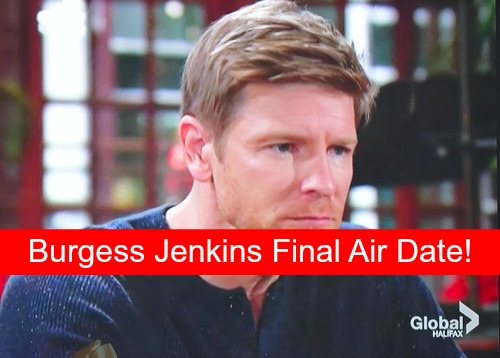 “The Young and the Restless” (Y&R) spoilers tease that Billy Abbott [Burgess Jenkins] spirals out of control leading up to a life-threatening showdown with Victor [Eric Braeden] and Adam [Justin Hartley] Newman. According to a CDL inside source, Burgess Jenkins last airdate on the CBS drama will be January 8.

The spoiler details a touching moment between Jack Abbott [Peter Bergman] talking at length about Billy to his father John’s ghost [Jerry Douglas]. Jack tells his father that he feels a responsibility for Billy’s accident because Jack knew that getting tangled with Victor would lead to an Abbott tragedy.

For a few months, it has been speculated that when Burgess Jenkins’ exits the show, he will leave during a tragedy of some sort, paving the way for the new actor [Jason Thompson] to step in the role. Billy is in the middle of a dead-end power struggle with Victor, and if he isn’t careful, it could cost him his life.

The fact that on Dec 5, Burgess Jenkins taped his last scenes gives the fans a final air date of Jan 8, according to a CDL inside source. The final scenes were reported to be emotional and heart wrenching.

After months of being on a war path, Billy will reach out to his family for help with his demons and fight with the Newman’s – only it will be too late for any outside help. Victor made his choice to take matters in his own hands, by demolishing poor Billy Abbott.

How will Victoria react to the altercation ending with Billy being rushed to the hospital with life-threatening injuries?

Tragedy strikes and Billy is rushed to the hospital – as his family prepares to tell him goodbye. Jack is devastated by his baby brother’s damaging behavior and cries to God to save Billy. John visits Jack to comfort him, and reportedly to tell him that Billy will make it.

Victor and Ashley [Eileen Davidson] will not come to any settlement offer, and the case will be set to go to trial. The power struggled between them continues, leading to an epic showdown, forcing Victoria Newman [Amelia Heinle] to take a side. If history repeats itself, Victoria will stand by her father, and her family name, forsaking Billy and his spiral downhill.

Burgess Jenkins will be exiting on Jan. 8, just in time to swap Jenkins for Jason Thompson in the hospital bed while Billy fights for his life. Do you think Billy can be redeemed after the Paragon mess? How will he save his relationship with Victoria? Don’t forget to come back later for more “The Young and the Restless” spoilers, gossip, and news!

Media outlets must CREDIT and LINK Celeb Dirty Laundry on this exclusive post.