The Young and the Restless (Y&R): Is Gabriel Bingham Alive – Appears in Genoa City for February Sweeps?

BY Chrissie Williams on December 20, 2015 | Comments: one comment
Related : Soap Opera, Spoiler, Television, The Young and the Restless 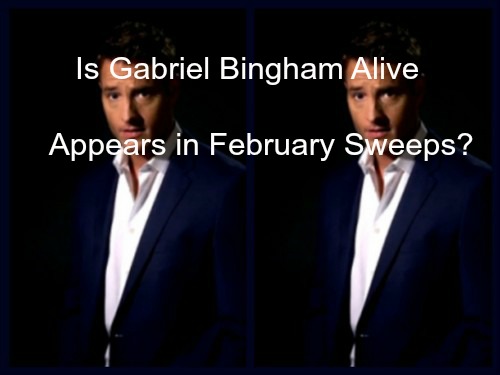 “The Young and the Restless” (Y&R) spoilers teased that Justin Hartley would play a double role in 2016—he was to portray Adam Newman and Gabriel Bingham. It looks like TPTB at Y&R might have axed that idea, and Gabriel may stay dead after all.

If Gabriel doesn’t show up on canvas, so much of the Adam storyline will not make sense—and Sage Newman [Kelly Sullivan] will never face any type of consequences for her involvement in Adam’s identity swap.

Gabriel Bingham was rumored to arrive on the GC canvas during Adam’s trial. Gabriel should have vindicated Adam’s involvement in Delia’s [Sophie Pollono] death. Most fans believe that Adam had nothing to do with Delia’s death, if anything, the accident was a tragic accident.

Adam was not at fault for Sage working behind his back to resurrect Gabriel Bingham to secure her Bingham’s inheritance claim. It wasn’t his fault that while he was in a coma, Sage changed his face without his consent.

Sage FORCED Adam to become Gabriel. Yet, Adam takes the whole brunt of the identity swap—seems pretty convenient for Sage, doesn’t it? When will Sage face any consequences of her forcing Gabriel’s identity on Adam?

One of the baffling parts of the Gabriel/Adam plot is the mystery behind Y&R’s head scribe, Chuck Pratt’s end game. One of the most frequently asked questions from fans is, why did Sage get involved, and give Adam Gabriel’s face and identity?

Gabriel was thought to be lurking in the shadows of Genoa City—watching over Sage and the man who now wears his face. Is it possible that he will yet show his face, and reveal that he is Gabriel Bingham?

Gabriel Bingham was a smart business-savvy man who could have brought Newman Enterprises to its knees. He could have been Ian Ward’s [Ray Wise] accomplice. Instead, TPTB came up with Billy boy [Burgess Jenkins] as being the brain that launched Paragon virus after the fire? Seriously?

Is it possible that Gabriel Bingham will show up for February sweeps bringing one heck of a surprise for everyone from Victor Newman [Eric Braden] to the man who shares a face with him, Adam Newman? It is looking like the ideal time to bring him on canvas, and if the writers plan it correctly Gabe could bring back some much needed excitement to the show.

“The Young and the Restless” spoilers revealed that during February sweeps, there will be a huge shocker that will leave Genoa City reeling. Is it possible that the bombshell could be that Gabriel Bingham is alive and well? If Sage discovers that Gabriel is in Genoa City, would she leave Nick Newman [Joshua Morrow]?

Check back later for more “The Young and the Restless” spoilers, news, and updates!