BY Heather Hughes on December 29, 2015 | Comments: one comment
Related : Soap Opera, Spoiler, Television, The Young and the Restless 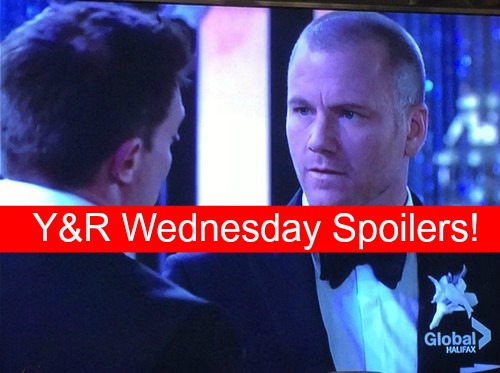 “The Young and the Restless” spoilers for Wednesday, December 30, tease that Abby (Melissa Ordway) will be on cloud nine. Traci (Beth Maitland), Victoria (Amelia Heinle) and Chelsea (Melissa Claire Egan) will gather around the blushing bride. Summer (Hunter King) and Nikki (Melody Thomas Scott) will be nearby, too.

As the ceremony rapidly approaches, Abby will declare that she can’t believe her wedding day is finally here. It seems Abby will be downright giddy with anticipation. This New Year’s Eve celebration will be one Abby won’t ever forget.

Meanwhile, Dylan (Steve Burton) will have a brief chat with Stitch (Sean Carrigan) before he ties the knot. It appears Dylan is worried about Stitch getting cold feet. Wednesday’s Y&R preview video shows Dylan reminding Stitch of the situation he faced with Ashley (Eileen Davidson).

Dylan will say he just wants to make sure Stitch isn’t having any second thoughts right now.

Naturally, Ashley will choose that exact moment to make her entrance. Stitch confessed his love for Ashley when they were trapped in the fire, but she insisted he should stick with Abby.

Once the wedding was back on, Stitch let Ashley know that he was indeed committed to her daughter. The question is: does Stitch mean it? It’s tough to say at this point.

Stitch will move forward with the ceremony regardless of his true feelings, but this marriage may not last. If Stitch would even consider dropping Abby for Ashley, that says a lot about how committed he really is. Going into a marriage with a mentality of “I can make it work,” isn’t exactly the best way to start things off.

“The Young and the Restless” rarely even allows couples who are madly in love to stay together. What will happen to a couple with doubts? Time will tell, but Stitch and Abby don’t seem like a match made in heaven.

Stitch’s lingering feelings for Ashley could mean bad news for this pairing’s prospects. Stay tuned to the CBS soap for updates on how long Abby will remain Stitch’s wife.