BY Heather Hughes on August 26, 2015 | Comments: one comment
Related : Soap Opera, Spoiler, Television, The Young and the Restless 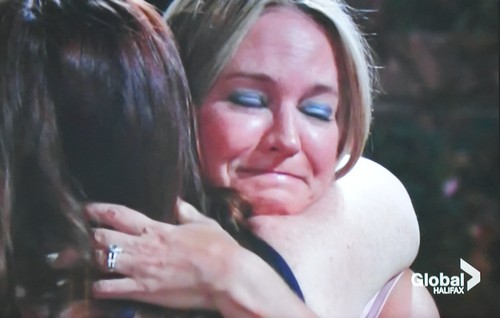 “The Young and the Restless” spoilers for Thursday, August 27, tease that Noah (Robert Adamson) and Marisa (Sofia Pernas) will make preparations for Nick (Joshua Morrow) and Sage’s (Kelly Sullivan) Y&R wedding in the park. Sage will have a brief dress issue, but Summer (Hunter King) will help her keep everything intact. They’ll have a pleasant, drama-free ceremony, which is highly unusual in Genoa City.

Kevin (Greg Rikaart) will be concerned about Mariah (Camryn Grimes), who wasn’t invited to the wedding. Mariah will try to downplay it, but it’s still a hurtful dis. Meanwhile, Sharon (Sharon Case) will find a gift Dylan (Steve Burton) bought for their child. Sharon will get visibly upset and Dylan will talk about how crushed he was when Avery (Jessica Collins) lost her baby. When Sharon asks if he could ever handle another loss like that, Dylan will stay silent. Later, Sharon will give Mariah the news that she had a miscarriage, but she hasn’t been able to tell Dylan yet.

Dylan will have a chat with Noah about Sharon’s moody behavior. Noah will worry about Sharon’s bipolar disorder symptoms resurfacing, but Dylan will assure him that she’s on her meds. Noah will indicate that they still need to be cautious and watch for the signs. The rumors hint that Sharon could be headed for a breakdown thanks to the loss of her baby. Stay tuned for updates on Sharon’s downward spiral.

Other “Young and the Restless” spoilers reveal that Michael (Christian LeBlanc) will insist that Devon (Bryton James) needs to head home while the mess with Hilary (Mishael Morgan) gets sorted out. Devon won’t want to leave in the middle of all this and they’ll get into an argument. The police will discover blood on a shoe and Lily (Christel Khalil) will provide a hairbrush so they can see if Hilary’s DNA matches. When Michael continues to press Devon to leave the island, he’ll get frustrated and shove a cop out of the way. Devon will find himself under arrest for assaulting a police officer. Back in Genoa City, Nikki (Melody Thomas Scott) will recall Neil’s (Kristoff St. John) fantasies about hurting Devon and Hilary. It seems Nikki is getting worried that Neil may have had a hand in Hilary’s disappearance.

In Paris, Adam (Justin Hartley) will try to convince Chelsea (Melissa Claire Egan) that they have to fight for her fashion line. Victor (Eric Braeden) is sure to ruin it. Chelsea will want to let it go and just focus on their new life together. When Chelsea realizes that Adam is still hung up on getting revenge, they’ll begin to bicker. Eventually, Chelsea will agree to return to Genoa City, but only if they come right back to Paris. Adam will assure Chelsea that they can get the job done in 48 hours. Of course, Y&R viewers know that something will likely keep Adam and Chelsea around. Stick with the CBS soap to see how Victor will suck them back in.