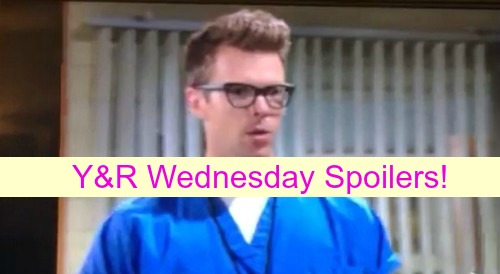 “The Young and the Restless” (Y&R) spoilers for Wednesday, November 18, tease drama, shock and discovery – CDL has great spoilers coming down below! We see that Hilary (Mishael Morgan) will hit a major snag in her recovery. Devon (Bryton James) will see that Hilary is unconscious and he’ll ask Dylan (Steve Burton) what happened.

Neil (Kristoff St. John) will blame Dylan for this stumbling block. In Wednesday’s preview video, Neil shouts that he told Dylan not to push too hard. Y&R rumors hint that all of Hilary’s memories will eventually return, but it appears it’s going to take even longer now that she’s had a setback.

Meanwhile, Adam (Justin Hartley) will have a surprise visitor at the hospital. “The Young and the Restless” spoilers say Adam will be stunned when Topher (Brian Dare) shows up with an urgent message.

Topher is the hacker who worked with Ian (Ray Wise) and Adam on the Paragon Project. It looks like their handiwork will continue to make waves. Adam will ask what he’s doing there and Topher will give him updates on the situation. Apparently, they have a big problem.

Topher and Adam aren’t the only ones who will realize that something’s up. “The Young and the Restless” spoilers reveal that Ashley (Eileen Davidson) will learn the Paragon Project is back and she’ll have to deliver the bad news. Jack (Peter Bergman) will undoubtedly be concerned about the damage it might do. After the horrible fire at Newman Enterprises, the Abbotts might be worried about what’s coming for Jabot.

Of course, Victor (Eric Braeden) needs to stay on guard as well. Billy (Burgess Jenkins) and Phyllis (Gina Tognoni) have decided to move full-speed ahead with their scheme to bring Victor down. They might even use the Paragon Project to do it. It seems Victor could have another crisis on his hands. Will Victor manage to turn the tables on Phyllis and Billy? Stick with the CBS soap to watch the Abbotts and Newmans face off once again.

So Y&R fans, what do you think about the hindrance in Hilary’s recovery? Will Neil be able to make things right? What about the Paragon Project’s comeback? What destruction will it cause during this attack? Let us know what you think in the comments below and don’t forget to check CDL often for the latest “Young and the Restless” spoilers, rumors, updates and news.