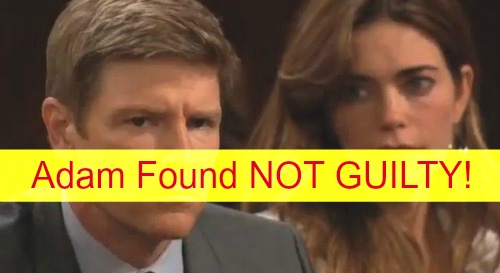 “The Young and the Restless” spoilers are in and boy are they juicy. Adam Newman’s (Justin Hartley) speedy trial is over and according to the CBS weekly promo the verdict is in. Spoilers reveal that Billy Abbott (Burgess Jenkins) will be blindsided by the verdict which means only one thing – Adam is acquitted of all charges. If Adam is acquitted, Genoa City will be flipped upside down.

Billy and Chloe (Elizabeth Hendrickson) are positive that Adam was the driver that accidentally ran over Delia two years ago. They have waited for 24 months for justice to be served. Imagine how relieved they were when Adam was arrested; they felt confident that he would finally go to jail for a long time.

First, Chelsea (Melissa Claire Egan) decided to testify on Adam’s behalf. Adam’s lawyer, Michael Baldwin (Christian LeBlanc), felt strongly that his wife should testify for him and his character. Adam wanted to hear one last time that she loved him. Chelsea told Adam she would have no problem telling the court what a lying conniving husband he was to her.

Chelsea was hurt and angered by Adam’s choice to seek revenge against The Moustache; Adam expected her to be in his corner no matter what – but he pushed Chelsea too far. Chelsea was pushed to her breaking point.

While on the stand, Chelsea stands by her man and tells the court he never meant to hurt anyone. She detailed the intense guilt he felt, and his struggle to come clean before Billy tried to kill him. Chelsea tells the court that she loved (loves) him deeply but he feels a connection disguised as hatred for his father, Victor (Eric Braeden). Chelsea explains that Adam’s hatred for his father outweighs any love he felt for her or Connor (Michael and Nolan Webb). When she leaves the witness stand, Adam has tears streaming down his face.

Adam’s attorney, Michael asked Adam to testify on his own behalf. He agreed; however, he was apprehensive about the outcome. Michael wanted the jury to hear what happened that night in Adam’s own words because the picture Christine (Lauralee Bell) painted of Adam was of a complete monster.

Soaps in Depth states that there will be twists and turns in the trial leading up to a shocking verdict. Michael calls a surprise witness that fans speculate could be the eye witness that could vindicate Adam from any wrongdoing.

Is it possible that Gabriel Bingham was the driver who hit sweet Delia? It is looking more plausible that Adam could be cleared of his charges, free to walk away without serving a day in prison. Don’t forget to come back later for more juicy “The Young and the Restless” spoilers, sweep previews, and news.