BY Heather Hughes on December 28, 2015 | Comments: one comment
Related : Soap Opera, Spoiler, Television, The Young and the Restless 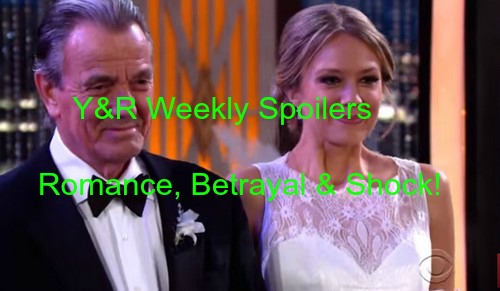 “The Young and the Restless” (Y&R) spoilers for the week of December 28-31 tease that romance and conflict will once again take center stage. First, we’ll see Noah (Robert Adamson) get updates on Marisa’s (Sofia Pernas) love session with Luca (Miles Gaston Villanueva).

Noah won’t be pleased by the news, but there won’t be much he can do. Marisa is falling more in love with Luca every day. Nevertheless, there could be hope for Noah down the road.

Meanwhile, Adam (Justin Hartley) will make a deal that could create major drama. It feels like Y&R just loves to keep Adam in trouble. It’s bad enough that Victor (Eric Braeden) has tightened his grip on Adam. Now it seems Adam will sink deeper into danger.

On top of being blackmailed by his father, Adam has a plan to get rid of the Santoris and he’s struggling with feelings for Sage (Kelly Sullivan). In other words, something is bound to go downhill soon. There’s a good chance Adam will face consequences for whatever perilous pact he makes with Luca, real or feigned.

Elsewhere, Abby (Melissa Ordway) will prepare to marry Stitch (Sean Carrigan). “The Young and the Restless” will pull out all the stops for this wedding. Forget those rinky-dink ceremonies in the park. Abby wants the wedding of her dreams and that’s what she’s going to get.

Everyone will get all dressed up for such a special occasion. Stay tuned to see Stitch and Abby officially tie the knot – or not!

Other “Young and the Restless” spoilers say Ashley (Eileen Davidson) will make a startling admission to Dr. Neville (Michael E. Knight). Ashley has been having severe headaches due to her illness. Will Ashley collapse in the midst of the celebration? That would definitely create a wedding shocker!

Once Ashley comes clean about her medical condition, Dr. Neville may be able to help her. These two have been growing closer lately. Could Ashley and Dr. Neville become an item at some point? They might actually make a fun couple!

Of course, we can’t forget about Stitch entirely. Stitch and Abby are getting married, but that doesn’t mean their relationship will last. The possibility of an Ashley and Stitch pairing could be revisited eventually. Love is certainly complicated in Genoa City. Stick with the CBS soap to see the twists and turns ahead.

So Y&R fans, what do you think about all the stunning moments coming up this week? Voice your opinion in the comments below and don’t forget to check CDL often for the latest “Young and the Restless” spoilers, updates and news.