The Young and the Restless Spoilers: Avery Vanishes, Pool of Blood Remains – Is Austin Behind Disappearance and Murder? 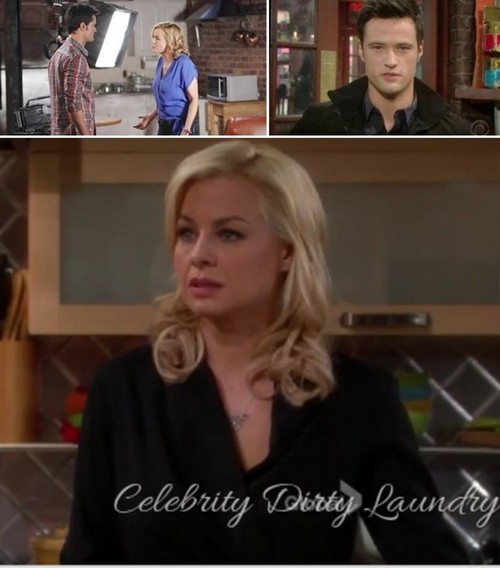 The Young and the Restless spoilers provide a theory as to the demise of a favorite character who is being forced off the Y&R canvas very soon. Avery Bailey Clark [Jessica Collins] is an Attorney who was brought to GC in 2011 by Victor Newman to defend Sharon Newman [Sharon Case]. Her story line has consisted of Legal work, her ex boyfriend Dylan Mcavoy [Steve Burton], being the younger sister of Phyllis Newman /Abbott [Gina Tognoni] and a short stint with a home cooking show. There was a lot of potential with this character but Y&R TPTB never warmed up to her, despite her superior acting talent.

The biggest The Young and the Restless storyline Avery had was when she was kidnapped by camera man apprentice Austin Travers [Matthew Atkinson] when he was working as her home cooking show cameraman to get closer to her because he had a vendetta. Most of us thought he worked for Ian Ward but in the end his hate for Ms .Clark was personal. Seems that Avery defended the man who murdered his mother who he was very close to and he wanted revenge. If Avery had never helped that murderer go free he would have never gone back to rob and kill Austin’s mother at the convenience store where she worked.

Austin stalked Avery, tweeting mysterious threatening tweets for months and then eventually taking her hostage and held a gun on her as she was tied to a chair ranting about how evil she was and that she murdered his mother! Eventually her boyfriend/hero Dylan came to the rescue along with Chief Williams [Doug Davidson], Det Harding [Chris McKenna] and Officer Courtney Sloan [Kelly Gross] who was Noah’s girlfriend.

Let’s fast forward to Valentine’s Day 2015 all of the ‘grown kids’ in GC are invited to a mystery Valentine’s party located at the Abbott cabin. Mariah [Camrynn Grimes], Kevin [Gregg Rikaart], Summer [Hunter King], Austin, Abby [Melissa Ordway], Noah [Robert Adamson] and Fen [Max Ehrich] are there. Kyle Abbott [Lachlan Buchanan] is there too but no one is aware he is because he is creeping around watching them. Fen spiked the punch (on the orders of someone blackmailing him because of his bad grades) and everyone passes out. BUT WAS everyone passed out? Was Austin awake when everyone else was asleep, did he stage his own murder?

If Austin was awake what does that tell you – that HE is the blackmailer, which makes perfect sense. Austin supposedly ended up dead BUT it is rumored that he took a drug that slowed down his heartbeat and he faked his death. The Scooby Gang, those geniuses, took his ‘lifeless’ body outside and left him in the snow so that they could think of a story to tell the cops. When it was time to retrieve him he was gone! Supposedly he was found in a car all bloody and dead as a door knob.

When Summer his grieving widow ID’d him she did not look at his face – the corpse she ID’d had dark hair and was tall it seemed that was all she needed to know. They had a Y&R funeral with a closed casket and he had no immediate family there. You ask why is all of this history relevant? Because of patterns, the patterns of the Cabin Killer and of Austin Travers!

The Cabin Killer continues to leave “threatening messages” just as Austin did when he was stalking Avery. Austin was sneaky as he watched Avery everyday in her own home. The one thing he did not count on was Summer Newman befriending him and eventually marrying him. What we have learned is that Austin was miserable the whole time he was married to Summer and that he hated people with money – more specifically the Newmans and the Abbotts. Austin’s mother had struggled to keep food on the table and worked her fingers to the bone to take care of him. Austin feels guilty because mom had to work at a convenience store to make ends meet and was robbed and murdered in her capacity as provider for her son!

Let’s now move ahead to current Y&R action according to SOD: sister Phyllis goes to Avery’s house because she is not answering her phone. Phyllis discovers the apartment in disarray, her landline phone on the ground with Dylan’s number typed in but not sent AND a big puddle of blood! No sign of Avery!

Phyllis panics and she feels something is terribly wrong – like YES, of course something’s wrong! The night before Avery had just had a horrible confrontation with her ex husband Joe Clark [Scott Elrod]. Avery had been nursing him back to health because she felt responsible for the condition he was in having pushed him over the balcony and all. Joe was in a wheelchair because Avery warded off unwanted advances AGAIN, she pushed him and he went over a balcony going paralyzed. TPTB want us to think Joe has killed Avery because the actress Jessica Collins is leaving the show and they have started to weave things into the storyline that were obviously recently added. For instance Joe is NOW an abuser, a wife beater? We don’t buy it, they are trying to make us believe that Joe is now an abuser and a murderer. Is he smarmy, yes. Dishonest and manipulative, yes. Is Joe a killer, NO!

In a previous CDL article we suggested that Austin is alive and following Summer, and because Summer was at Auntie Avery’s the day before AUSTIN was there also. Austin has shown that he does not let vendettas go, the only reason why he didn’t hurt Avery the first time was because he was stopped by Dylan and the cops! Maybe Austin came back to finish off the job!

Next week of June 8 The Young and the Restless will be a week of plot twists and more mysteries including big reveals! Where is Avery – will her lifeless bloodied body end up in the Abbott Cabin armoire like the rest of the Cabin Killer’s victims? We say YES! Stay tuned to CBS’s Young and the Restless for a scorching week of action, suspense and big reveals! Do you think Joe is a killer or do you think the obvious suspect is Austin Travers? Please leave your thoughts and comments in the CDL comments below and come back for more Y&R spoilers, updates and news!