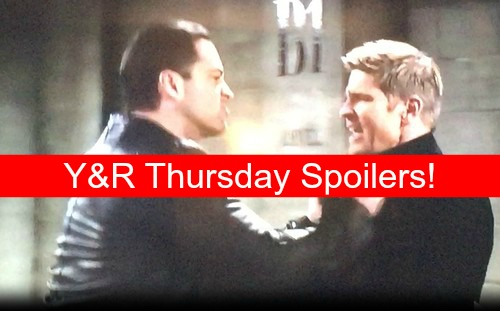 “The Young and the Restless” spoilers for Thursday, December 31, tease that Stitch (Sean Carrigan) and Abby’s (Melissa Ordway) wedding will face a frightening delay. In Wednesday’s episode, Ashley (Eileen Davidson) passed out during the ceremony. Now everyone will want to make sure Ashley is OK.

Stitch will bend down and ask Ashley if she can hear him. After a few moments, Ashley will begin to regain consciousness. It seems Ashley will make it through her latest episode, but she obviously needs some help.

There’s a good chance that Ashley will downplay the seriousness of her condition. Nevertheless, Dr. Neville (Michael E. Knight) will know something is very wrong.

“The Young and the Restless” spoilers indicate that Ashley will open up to Dr. Neville about what she’s dealing with. Ashley’s admission may shock Dr. Neville at first, but he’ll undoubtedly want to come to her aid.

As for the wedding, things should get back on track after the chaos dies down. Ashley will likely insist that Stitch and Abby continue their vows. Ashley is determined to make this wedding happen and it’s finally in the homestretch. That’s great news for Abby, who’s been excited about tying the knot on New Year’s Eve.

Meanwhile, Jack (Peter Bergman) will chat with Victoria (Amelia Heinle) about his concern for Billy (Burgess Jenkins). Victoria will point out that Billy said he had some irons in the fire. Jack will suggest that those irons may be horses that didn’t win. Unfortunately, Y&R viewers know that Jack is right about Billy’s bad luck.

Thursday’s preview video shows Billy’s bookie shoving him against the wall in a parking garage. Billy will try to buy a little time, but the bookie will make it clear that he’s tired of waiting.

They’re doing this right now. Billy’s ill-advised bets could cost him more than he bargained for. Stick with the CBS soap for updates on Billy’s attempt to get out of this jam.