The Young and the Restless (Y&R) Spoilers: Billy’s Final Blunder – Adam Betray’s Victor With Luca – Noah A Fool For Marisa 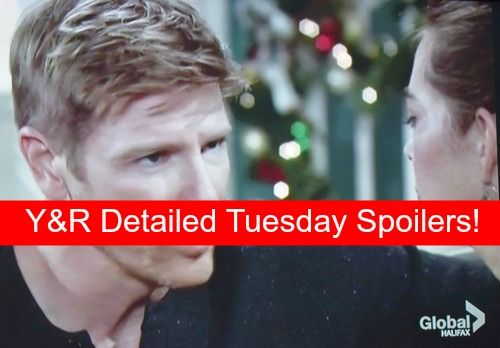 “The Young and the Restless” spoilers for Tuesday, December 29, tease that Billy (Burgess Jenkins) will be feeling pretty pleased with himself. Billy didn’t have any alcohol over the holidays and he’s getting back on track with Victoria (Amelia Heinle). Phyllis (Gina Tognoni) will listen to Billy discuss how great things are going.

When Billy gloats about a wedding being in their future, Victoria will overhear and think they’re far from walking down the aisle. Billy will clarify that he wants to take Victoria to Stitch (Sean Carrigan) and Abby’s (Melissa Ordway) wedding.

Victoria will reply that she’ll be busy helping Abby prepare for the ceremony. Later, Phyllis will question Victoria about where she stands with Billy. Phyllis will want to know if Victoria is giving Billy another chance.

At the police station, Mariah (Camryn Grimes) will urge Kevin (Greg Rikaart) to let Billy in on his project. Mariah will think Kevin could squeeze $2 million out of Billy even though he only needs $1 million. Billy is desperate and Kevin might as well get a good profit out of this.

Kevin will be hesitant, but he’ll finally agree to make Billy an investor. Billy will be thrilled by the news and he’ll insist that he can get the money by tomorrow. Billy will rush off to find his bookie and place one last bet.

The bookie will think Billy’s pick for the race doesn’t have good odds, but Billy won’t care. He has to get a big win and earn back his family’s respect through the investment.

Unfortunately, Billy will soon learn he lost his bet and he’ll order a drink. When Phyllis overhears the order, she’ll cancel it and wonder what’s up.

Elsewhere, Luca (Miles Gaston Villanueva) will brag to Noah (Robert Adamson) about the time he’s been spending in Marisa’s (Sofia Pernas) suite. Things will get awkward, but Noah will point out that Marisa made her own choices and now he’s making his.

Once Noah is gone, Marisa will chastise Luca for throwing their relationship in Noah’s face.

Other “Young and the Restless” spoilers reveal that Adam (Justin Hartley) will express some concern over the plot against the Santori family. Victor (Eric Braeden) will wonder if Adam is bailing on their deal, but Adam will indicate that he can’t.

Victor knows the truth about Christian and Adam has no choice but to cooperate. Victor will declare that he’s getting rid of the Santoris and no one can stand in his way.

Adam will set up a meeting with Luca at the penthouse. When Luca arrives, Adam will lay out a new plan. They can give dirt to the FBI on their fathers. With any luck, Adam and Luca can get both of them locked up. That would allow these sons to take over for their dads.

Luca will be hesitant to trust Adam, but he’ll finally decide it’s better than dealing with Victor. They’ll shake hands on their agreement. Has Adam delivered a Trojan Horse?

Mariah will chat with Marisa about how she can’t have both Noah and Luca. Marisa will understand that she needs to set things straight with Noah. Meanwhile, Noah will worry about what’s going to happen to Marisa.

She’ll obviously be caught in the middle of this Newman and Santori battle. As Noah shares his fears with Victor, Marisa will show up to speak with Noah privately.

When Marisa confesses that she didn’t mean to grow closer to Luca, Noah will say he doesn’t blame her. Noah was the one who pushed Marisa right into Luca’s arms.

Marisa will point out that she still cares about Noah. Noah will reply that he loves Marisa; that never changed. Y&R viewers will be anxious to see if Noah and Marisa can ever recapture what they once had. Stick with the CBS soap for updates on their possible reunion.