‘The Young and the Restless’ (Y&R) Spoilers: Chelsea and Adam Fight Victor for Connor’s Custody – Fireworks for Noah and Marisa 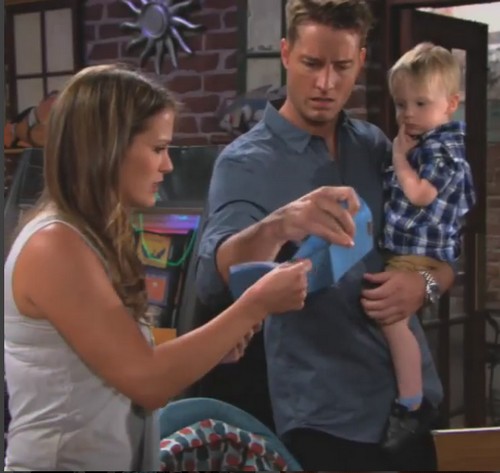 “The Young and the Restless” spoilers reveal that the passion is about to get kicked up a notch for one Y&R couple. From the moment Marisa (Sofia Pernas) showed up in Genoa City, Noah (Robert Adamson) felt the need to protect her. The pair had an easy, instant chemistry and they’ve been growing closer every day. Victor (Eric Braeden) is convinced that Marisa is trouble, especially considering her connection to Marco (Peter Bergman).

Victor would rather leave no trace of the Jack (Peter Bergman) swap and his ties to the evil drug lord. In fact, Victor will make it clear to Marisa that he wants her out of town pronto. If Victor’s threats aren’t enough, he’s hoping that $500,000 will do the trick. Bottom line, Marisa needs to go and Victor will do whatever it takes to make that happen. Unfortunately, the heart wants what the heart wants. It seems Noah and Marisa just can’t fight their feelings for each other.

In the “The Young and the Restless” weekly preview video, Noah moves in close and tells Marisa that he’s falling in love with her. Noah has struggled to let himself move on since Courtney’s (Kelli Goss) death, but it appears he’s finally grieved his loss. Courtney would want Noah to be happy and he feels like this is his chance. Stay tuned to the CBS soap to see if Noah and Marisa can’t beat the odds.

Elsewhere, Adam (Justin Hartley) and Chelsea (Melissa Claire Egan) will realize that Victor means business. Chelsea and Adam planned on taking control of the fashion line and heading back to Paris for a fresh start. However, Victor isn’t going to stand by and watch his grandson be taken away from him. Connor (Michael and Nolan Webb) is a Newman and Victor wants to make sure he preserves the family legacy.

It looks like Victor may take legal action to get his way. Adam and Chelsea won’t give up without a fight, but can they really top the master of manipulation? Why isn’t Victor already in jail for bringing Marco to GC? How much can The Moustache get away with? Y&R rumors hint that Adam and Chelsea won’t be going back to Paris anytime soon. Stick with “The Young and the Restless” for updates on the intense battle to come.

So Y&R fans, what do you think about the news that Noah and Marisa will crank up the romance? What about Victor’s drastic measures to keep Connor close to home? Can Victor be stopped? Will Adam risk revealing his true identity to protect his son? Let us know what you think in the comments below and don’t forget to check CDL often for the latest “Young and the Restless” spoilers, rumors, updates and news.

Things heat up and someone gets burned! Don’t miss another dramatic week of @youngandrestlesscbs! #YR