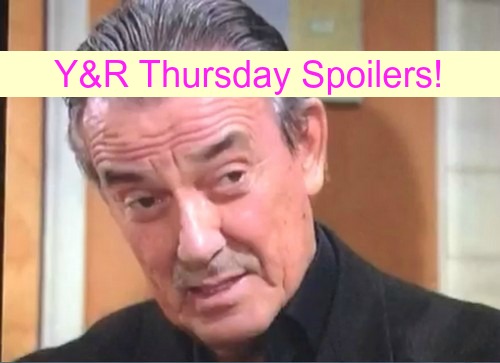 “The Young and the Restless” spoilers for Thursday, November 12, tease that tensions will run high when Devon (Bryton James) thinks Dylan (Steve Burton) is hindering Hilary’s (Mishael Morgan) progress. Devon will insist that he doesn’t want anyone messing with his wife’s mind.

It seems Devon’s world has fallen apart. Hilary’s disappearance was hard for Devon to handle, but the fact that she doesn’t want him has been even tougher to swallow. Devon will confess to Dylan that it’s like Hilary isn’t even the same woman he married.

Meanwhile, Sage (Kelly Sullivan) will face a difficult task. Now that Sage is starting to come to grips with Christian’s death, it’s time for her to give Faith (Alyvia Alyn Lind) updates on the tragic event. “The Young and the Restless” spoilers say Sage will announce that she has something to tell Faith. Faith will ask if it’s about Christian and Sage will tearfully admit that it is.

Poor Faith was so excited about getting to know her little brother. Fortunately, Faith will probably still have that chance. Y&R rumors hint that Dr. Anderson (Elizabeth Bogush) kidnapped Christian and is preparing to pass him off as Sharon’s (Sharon Case) baby.

Of course, we have to remember that Faith’s brother may actually be her cousin. In Wednesday’s episode, Victor (Eric Braeden) confronts Adam (Justin Hartley) about the possibility that he’s the child’s true father.

Thursday’s preview video shows Chelsea (Melissa Claire Egan) walking in on their conversation and sensing that she’s interrupting something. Victor will raise his eyebrows as he gives Adam a smirk. Naturally, Adam will look concerned.

If Adam is indeed Christian’s dad, he’d undoubtedly prefer to keep it under wraps. It sounds like Christian will play a big part in the storylines that are coming up on “The Young and the Restless.” Stick with the CBS soap to see all the baby drama to come.

So Y&R fans, what do you think about Devon’s outburst? Will Dylan be able to provide any comfort? Will Faith be crushed by the news about Christian? Is Adam really Christian’s father? Let us know what you think in the comments below and don’t forget to check CDL often for the latest “Young and the Restless” spoilers, rumors, updates and news.