The Young and the Restless (Y&R) Spoilers: Chloe Arrested – Hilary Wakes Up, Sneaks Away – Joe and Cane Punch Up 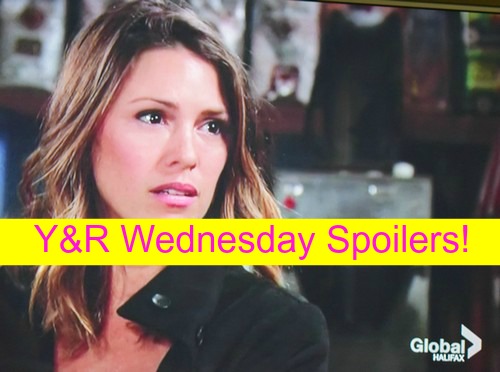 “The Young and the Restless” (Y&R) spoilers for Wednesday, October 28, tease that Abby (Melissa Ordway) will happily accept Stitch’s (Sean Carrigan) proposal. However, Abby will want to get to the bottom of Ashley’s (Eileen Davidson) true feelings on their engagement. Ashley will hint that Abby might not be ready for this, but Abby will say she’s found real love with Stitch. Since Abby seems so convinced, Ashley will congratulate her and insist that she’s thrilled.

At Jabot, Billy (Burgess Jenkins) will tell Victoria (Amelia Heinle) that he’s had a change of heart. Billy will announce that he’s returning everything he bought from Newman Enterprises. Ashley will arrive and suggest that Billy has the right idea. It was wrong to capitalize on Newman’s misfortune.

When Victoria leaves the room, Billy and Ashley will discuss Abby’s engagement to Stitch. Billy will pick up on the fact that Ashley’s not on board with the news. Victoria will return and catch the end of their conversation, but Ashley won’t want to discuss it any further. Billy will learn that Jabot is under attack by the Paragon Project. Now their assets are being sold off just like the ones at Newman Enterprises.

In a suite at the athletic club, Stitch and Abby will make love. Afterwards, they’ll talk about Ashley’s reaction to their engagement. Abby will think Ashley is just being too cautious. Meanwhile, Mariah (Camryn Grimes) and Paul (Doug Davidson) will try to convince Kevin (Greg Rikaart) that Chloe (Elizabeth Hendrickson) needs serious help. Kevin will receive word that Chloe is at Crimson Lights and he’ll head over.

Other “Young and the Restless” spoilers say Chelsea (Melissa Claire Egan) and Chloe will argue about the hit-and-run. Chloe will believe that she was just getting justice for Delia (Sophie Pollono), but Chelsea will think it was insane to run down Adam (Justin Hartley). Chelsea will be sympathetic to what Chloe is going through, but her sorrow doesn’t excuse her behavior. They’ll bicker until Chloe declares that she needs to be with her daughter.

Kevin will walk in and ask what Chloe is talking about. Chloe will reply that she means their daughter, Delia. When Paul comes in, Kevin will encourage Chloe to go with him. Kevin will tell Mariah that he doesn’t know if Chloe will ever get over her loss. At the lake house, Hilary’s (Mishael Morgan) fingers will move and Dr. Neville (Michael E. Knight) will think that’s a good sign. Neil (Kristoff St. John) and Gwen (Nadine Nicole) will leave Dr. Neville to watch over Hilary.

Once Gwen and Neil are gone, Dr. Neville will take a nap. While the doc’s dozing, Hilary will wake up and look confused. When Dr. Neville awakens, Hilary will be missing from her bed. Meanwhile, Cane (Daniel Goddard) will be angry because he feels like Lily (Christel Khalil) doesn’t believe in his innocence. Lily will indicate that she’s trying to stand by Cane, but he’s making it tough. Joe (Scott Elrod) will jump in the mix and he’ll end up getting in a fight with Cane.

Once the brawl breaks up, Joe will tell Lily he feels bad about the trouble he’s caused in her marriage. However, Joe will hint that he wouldn’t take back what happened between them that night. Elsewhere, Neil will tell Cane that he shouldn’t have been fighting with Joe. Cane’s bail could be revoked for an incident like that. Neil will indicate that things will work out for Cane and Lily. They just need to resolve the situation with Hilary.

Cane will think it’s ridiculous that Lily would believe he’d be involved in Hilary’s ransom. Cane will insist that you’d have to be a monster to keep Hilary stashed somewhere. What will happen if everyone discovers Neil’s secret? Y&R rumors say that Hilary could cause big trouble for Neil. Stick with the CBS soap for updates on what Hilary will do next.