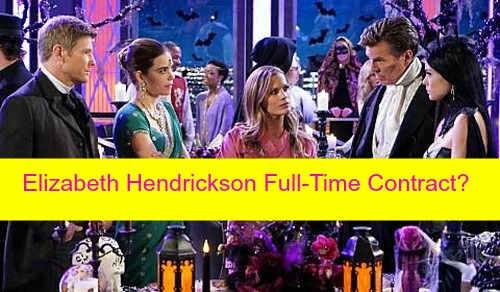 “The Young and the Restless” spoilers are in and it looks like Elizabeth Hendrickson may have decided to extend her short contract with the show. Initially, she was cast for a short stint that would include a huge confrontation with Adam Newman (Justin Hartley) and reveal which man – Billy (Burgess Jenkins) or Kevin (Greg Rikaart) fathered her new baby.

After her storyline wrapped up, Elizabeth told Soaps In Depth that she was open to coming back- teasing she was open to a full-time contract. So where does that leave Chloe for now?

On Friday, October 23 Adam Newman’s trial ends and his verdict is read. Soap Opera Digest teased that Billy Abbott (Burgess Jenkins) will be blindsided by the verdict which can only mean one thing – Adam will be acquitted.

If that happens, fans speculated that Chloe will become unhinged and a danger to EVERY Genoa City resident. Considering the not guilty verdict, it is likely Chloe will be the one who starts the fire that threatens to take down Newman Enterprises and all who attend the Halloween Newman gala.

Phyllis (Gina Tognoni) and Nikki (Melody Thomas Scott) host an elegant and stylish Halloween gala at the top of the Newman building on October 30. Recently, the five-star restaurant re-opened and they felt it was the perfect place for the event. Someone decides to take this chance to seek revenge on the WHOLE Newman family and starts a fire. The fire quickly turns into a massive explosion – leading to four people losing their lives – one being a major character contract player on the show.

It isn’t hard to jump to the conclusion that Chloe could be the one that starts the fire that ends up costing four Genoa City residents their lives. She is filled with rage because she feels in the end Adam did not pay for ‘murdering’ her daughter.

The rumor is that in the trial it comes out that Adam was not the one who killed Delia, but it was someone else – looking very possibly like Gabriel Bingham as CDL explained earlier. When Chloe learns Adam was innocent, she suspects that Victor fixed the trial so he will walk without serving one day in prison; it prompts her to take it upon herself to seek a judgement for Delia in the way she sees fit – a fire.

Elizabeth Hendrickson stated she enjoyed working with “The Young and the Restless” and hoped that it could work into an extended contract portraying Chloe Mitchell. She noted she has the time to dedicate to the show and feels emotionally invested in Chloe’s storylines.

Chloe’s many fans were thrilled to see her return and are hoping her recent stint on the show would turn into a permanent contract. Who do you think is her baby’s father – Kevin or Billy? Do you think TPTB would be open to Chloe returning to the show on contract status? Don’t forget to come back later for more juicy “The Young and the Restless” spoilers, rumors and updates.