The Young and the Restless (Y&R) Spoilers: Connor Newman Vanishes – Kidnapped by Chloe or Just Missing? 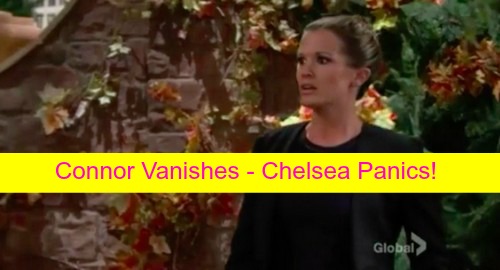 “The Young and the Restless” spoilers are in and Connor Newman turns up missing after an emotionally charged day in court. It is Chelsea’s [Melissa Claire Egan] worst nightmare turned reality, and understandably she loses her cool. Billy [Burgess Jenkins] helps her look for her child, but will they find him or has someone taken him to seek revenge against her or possibly Adam Newman [Justin Hartley]?

The Thursday, October 22 Y&R preview showed Chelsea and Billy searching all over Chancellor park for the young tot. “Y&R” spoilers have teased for some time that Chloe [Elizabeth Hendrickson] would kidnap Connor.

When she returned to Genoa City, one of the first things, she did was enter Adam’s home when no one was there just to see a picture of Connor Newman. With the court ruling happening in the next few days, Chloe is bound to feel out of sorts with anxiety that Adam COULD walk free.

Chloe returned to Genoa City in exactly the same frame of mind as she left – completely unhinged and out of control. She is hell-bent on a revenge plot that has an end game of Adam Newman dead – after all she almost shot Adam recently and was only talked down by Chelsea because Chloe is thinking of her secret child.

The Y&R spoilers state that Adam will be acquitted of all charges, and as a result Chloe goes off the deep end – including kidnapping Connor and possibly starting a fire in the Newman Tower during the Halloween gala.

No one denies that losing a child is a defining and life-altering event. Every single resident of Genoa City feels sympathy for Billy and Chloe over the loss of Delia. Adam has expressed his apology for the tragic event that leads to her dead many times. Neither of Delia’s parent will be happy until he serves his life in prison or is dead.

When you think about it, it seems very likely Adam will be acquitted. There is absolutely no drama in him serving time in jail. He is a MAJOR character and is a focal point in many storylines. His acquittal will cause a stir and result in Chloe taking the law in her own hands, possibly even Billy. It is possible her real plan is to lure Chelsea and Adam to her to rescue their son, which would give her the opportunity to kill him if that is her true end game.

How will Chloe feel when she hears the local news broadcasting Chelsea’s testimony? Esther (Kate Linder) blasted Chelsea for standing by her man. She asked her how she thought Chloe would feel knowing that her best friend defended the man who is accused of murdering her daughter. Chelsea tried to explain that Adam was her husband, but it fell on deaf ears.

The truth is the situation is extremely emotionally charged; no one is capable of seeing it clearly. Will Billy and Chelsea find Connor before Chloe turns up the revenge plot to a new level? Is Chloe the one who starts the fire in the Newman Building next week? Don’t forget to check back daily for more juicy “The Young and the Restless” spoilers, rumors, and updates!