BY Heather Hughes on December 8, 2015 | Comments: one comment
Related : Soap Opera, Spoiler, Television, The Young and the Restless 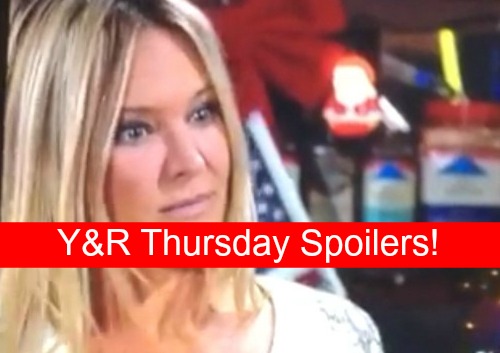 “The Young and the Restless” spoilers for Thursday, December 10, tease that Sharon (Sharon Case) will have a tense run-in with Dr. Anderson (Elizabeth Bogush). Dr. Anderson carefully orchestrated her devious plot, but she had to put out some fires along the way. Nick (Joshua Morrow) recently took issue with Dr. Anderson’s constant interference, but she managed to calm him down.

Now Dr. Anderson may have to deal with backlash from Sharon. It looks like Dr. Anderson will bug Sharon about life with her baby. Thursday’s preview video shows Sharon asking if there’s something wrong with her behavior or the way she’s feeling about Dylan.

Sharon follows up by asking if Dr. Anderson thinks she needs to return to Fairview. However, Sharon’s tone seems to indicate that she’s a little annoyed by Dr. Anderson’s continued presence.

Sharon is undoubtedly ready to put the Fairview mess behind her and focus on the future. Dylan (Steve Burton) and Sully are what’s important. Of course, Dr. Anderson is usually pretty good at manipulating Sharon. Y&R viewers will be anxious to see how long Sharon will put up with Dr. Anderson’s meddling.

Meanwhile, Sage (Kelly Sullivan) and Nick will have another fight. Their grief is making it difficult to get their relationship on solid ground. They always take one step forward and two steps back. “The Young and the Restless” spoilers say Nick will begin boxing up things from Christian’s nursery.

Sage will think Nick is just trying to pretend their son never even existed. This couple is really struggling to cope with their loss.

Elsewhere, a different couple will have to contend with their own set of problems. In Thursday’s preview video, Cane (Daniel Goddard) rants about Lily’s (Christel Khalil) involvement with Joe (Scott Elrod). Cane tells Devon (Bryton James) that not only did Lily sleep with Joe, she now claims to have feelings for him.

If Cane is correct, it’s obviously bad news for his marriage. Lily should think long and hard about which man she truly wants. There could be consequences if she ends up picking the wrong one. Stick with the CBS soap for updates on what the future holds for Lily.