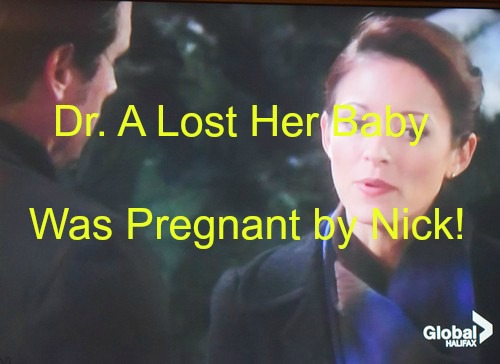 “The Young and the Restless” spoilers tease that a whopper of a bombshell is about to come out regarding Dr. Anderson’s [Elizabeth Bogush] history and motivation. Now, not much is known about her reasoning for bringing such heartache to the Newmans and others; however, TPTB promised soon enough it would all come out.

A year ago, Sharon Newman [Sharon Case] revealed that she knew that Sandra Allen was injured on the ranch when Nick Newman [Joshua Morrow] was in high school. Sharon explained that her attorney wanted her to use that information to her advantage in Faith’s [Alyvia Alyn Lind] custody battle Sharon refused to use it against him –a decision that cost her to lose custody of Faith.

Sharon explained she saw Sandra dive into the pool after having a little too much to drink that night. Nick teased her into diving from the roof of the pool house—in order to prove she could do it. Apparently, in school, Sandra was part of the diving school team. Sharon watched as Nick flirted with Sandra—jealous he’d choose to be with anyone but her!

When Sandra dived in the water, something went wrong. She seemed to disappear, and when she came to the surface of the water, she was limp and nonconscious. Nick panicked; he called his father, Victor Newman [Eric Braeden] for help. Victor called the girl’s parents and the ambulance immediately.

Sharon overheard the call to her parents to let them know what happened. Victor told them there was an accident, and she was transported to the nearest hospital. He also revealed he would foot all her medical bills, so this little incident never found its way into the press’ hands.

Of course, for a fee, Sandra’s parents agreed to keep quiet about the agreement. Victor and Nick never heard from Sandra Allen again—well, until now.

CDL exclusively learned another big piece of the puzzle from a confidential source close to Y&R. Sandra was pregnant when she tragically dived under the water at the Newman Ranch. Sandra slept with Nick at a party a few weeks earlier and was working up the nerve to tell him he was about a father.

Once admitted to the hospital, she learned that not only did she lose her baby that night, but also having another child wasn’t a possibility. The extent of the injury was too severe. Sandra was left to grieve not only for the child she lost but to grieve the loss of motherhood.

Sandra Allen crusades to get back at the Newman’s makes more sense with the knowledge that she lost a child in high school. She feels she has to take a child from Nick since he ‘stole’ her child. It appears right now that Sharon and Sage Newman [Kelly Sullivan] are collateral damage in her scheme–her target is Nick Newman.

Head scribe, Chuck Pratt teased fans that Dr. Anderson’s story will be a main focal point of 2016. Check back with CDL later for the latest “The Young and the Restless” spoilers, news, and updates!