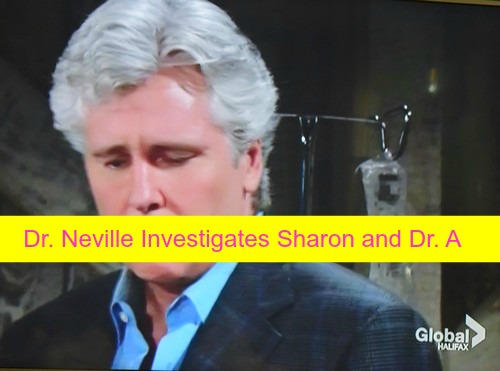 “The Young and the Restless” (Y&R) spoilers tease that Michael E. Knight will be sticking around in Genoa City on the soap for quite some time. At the moment, Dr. Neville [Michael E. Knight] is brilliant, yet an odd neurologist who is helping Hilary Hamilton [Mishael Morgan].

Dr. N has not had any contact with anyone but Neil [Kristoff St. John] and Gwen [Nadine Nicole]. In a recent interview, the established actor teased that Dr. Neville will have a new project soon – Sharon Newman [Sharon Case].

Michael Fairman sat down with the former “All My Children” star last week, and Michael E. Knight said that he was filming scenes with Steve Burton [Dylan]. Michael said his stay was extended, hinting at a possible contract with the soap.

Michael said that the show initially asked him to appear on just ten episodes, but recently, they asked him if he’d stay for an unspecified amount of time. The show plans on introducing him into other storylines and gave him a new client- Sharon Newman.

It’s clear that Sharon Newman needs serious mental and physical help right now with the quack Dr. Anderson [Elizabeth Bogush] managing her care. Dylan has a hunch that the strange doctor could be up to something with Sharon (no kidding!), and he’s determined to get to the bottom of it.

Will Dr. Neville be the one to discover that Dr. Anderson is really Sandra Allen hell-bent on revenge? Dylan realized that he doesn’t know Sharon as well, as say Nick [Joshua Morrow], but he knows Sharon would never say she doesn’t want to see her children.

When Dylan is finally about to see his fiancée, her deteriorated condition shocks him – leading to more questions about the care she received at the hands of Dr. Anderson. He starts to worry if she may have a neurological issue, prompting him to reach out to Dr. Neville.

Is it likely that Dr. Neville discovers that Sharon may not have been bipolar after all? Besides the drugs that Dr. A is pumping into her patient, is it possible she could have a brain tumor or something else medically wrong that could explain her wacky and often impulsive behavior?

Michael E. Knight teased the material is full of twists and turns, with a shocking end. He hinted that a there is a possible romantic relationship with a leading lady ahead in the works for Dr. Neville. Which leading lady would make a good match for him? Could it be Ashley [Eileen Davidson]?

What could be wrong with Sharon? Did the doctor’s shoddy medical care and excessive drugging damage Sharon for good? Let us know what you think about Dr. Neville, Sharon Newman, and Dr. Anderson in the comments below; don’t forget to check back to CDL later for more “The Young and the Restless” spoilers, rumors, and updates!