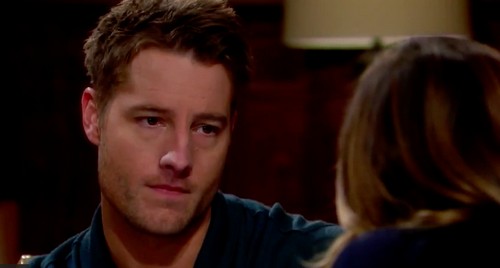 “The Young and the Restless” spoilers for Friday, March 13, hint that some Genoa City residents may feel a bit unlucky in love. Kevin (Greg Rikaart) will show Summer (Hunter King) and Kyle (Lachlan Buchanan) portions of the documentary Austin (Matthew Atkinson) was working on. Kevin will need to keep working to break the rest of the encrypted files, but he has enough to show Summer what kind of a man she married. Summer will be shocked as Austin describes the “smug and self-satisfied” Abbott family that’s only surpassed by the terrible Newmans.

Austin will say that he had a front-row seat to both families thanks to Summer. The purpose of the documentary was to expose “the ugly truth” about both the Newmans and the Abbotts. Summer will be shocked that Austin was still the man he used to be and Mariah (Camryn Grimes) will mock Summer for thinking she could change him. Mariah will imply that Austin didn’t want to be her pet poodle and Summer will think that maybe Mariah put Austin up to making the video.

Kevin will suggest that they should find out who mugged Abby (Melissa Ordway) before he or she strikes again. Mariah will say it might have been Victor (Eric Braeden), but Summer will say he wouldn’t do that. Kyle will shoot down the possibility that it was Jack (Peter Bergman). The cabin crew will need to learn who is out to get them—and fast.

Other “Young and the Restless” spoilers for Friday, March 13, tease that Gabriel/Adam (Justin Hartley) will talk the contractor about the timeline for the repairs. Gabe obviously wants to keep living at the Abbott house so he’ll give the contractor some money to stall the job. Meanwhile, Jack will tell Billy (Burgess Jenkins) and Ashley (Eileen Davidson) about Kelly’s (Cady McClain) confession. Chelsea (Melissa Claire Egan) will chime in and say she’s glad it’s over. Billy will make a joke about things going wrong at the engagement party and Chelsea will be annoyed.

Billy will also ask if anyone else has noticed Sage (Kelly Sullivan) and Gabriel’s strange behavior. Ashley will say that Billy and Chelsea should have a double wedding with Jack and Phyllis (Gina Tognoni). Chelsea will say that they’ll be happy to delay their marriage and Billy will reply “We are?” Phyllis will indicate she’s not so sure there will be a wedding and Jack will look surprised. Ashley will ask what dates Chelsea is considering she’ll make it clear that she doesn’t have any in mind. Billy will take Chelsea aside and question if she really wants to be married to him. Chelsea will brush off his suspicions and tell Billy that she just needs to plan everything.

After Ashley leaves the room, Jack and Phyllis will discuss their relationship. Phyllis will still feel somewhat betrayed and she’ll be unsure of their future together. However, Jack will be adamant that he’s going to marry Phyllis and he’ll propose that they do it in one month. Phyllis will agree to get married, but she’ll say that’s not enough time to get everything together. Jack’s not budging on this one. Jack wants Phyllis as his wife very soon.

Back with Gabriel/Adam, Sage will ask if there are any updates on the contractor’s repairs. Adam will tell her it will all get done in due time. Sage will bring up the idea of divorce again and indicate that she didn’t know what she was getting into. Sage wasn’t aware she was marrying a man who was stalking his ex. Adam will want them to stay the course, but Sage will say she’s missing out on being with Nick (Joshua Morrow). Sage will suggest that Adam should tell Chelsea who he really is.

Maybe Chelsea would forgive Adam and they’d all be free. Chelsea will show up and Adam will let slip that he’s Billy’s best man. Chelsea will be surprised by the news, but Billy will appear and explain that it’s because Gabriel saved his life. Gabriel is the reason Chelsea and Billy have a future together. Adam will feel like he pushed Billy and Chelsea together and he’ll drink heavily at the engagement party.

Y&R spoilers also indicate that Stitch (Sean Carrigan) will continue to have suspicions about Abby. Abby won’t like getting grilled, but Stitch will say he’s just trying to help. Abby will admit that Austin was murdered and her friends suspect that she did it. Stitch will assure Abby that he won’t let her get locked up for something she didn’t do. Still, Stitch will think they should go to the police. Abby won’t want Stitch to say anything and he’ll tell Abby to be careful. Victoria (Amelia Heinle) will receive a message from Victor in the midst of all this. Victor will say to call him because the results will be worth it. Later, Stitch will tell Kevin that Abby told him the whole story.

Back at the engagement party, Jack will propose a toast to the happy couple. Gabriel/Adam won’t look happy about it and he’ll get up to give a toast of his own. As Sage and Jack look at him in shock, Gabriel will announce that there’s something Chelsea needs to hear. Could this be the moment Adam reveals his true identity? The rumors say Adam may not be ready to give that info to Chelsea just yet, but anything can happen. Stay tuned to the CBS soap to see what Adam will decide to share.