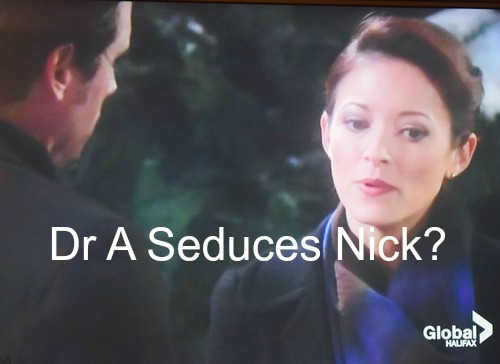 “The Young and The Restless” (Y&R) spoilers tease that Dr Sandy Anderson (Elizabeth Bogush) is far from done with her plans to wreck Nick Newman’s (Joshua Morrow) life. As if stealing his baby and letting him think Christian is dead wasn’t bad enough, she’s planning worse.

Remember after the Sharon Newman (Sharon Case) and Dylan McAvoy (Steve Burton) impromptu wedding – Dr A walked out with Nick and they had a depressing chat in the snow. Sandy seemed to be lending a supportive ear to Nick, but she was just laying more groundwork.

Now that Sage Newman (Kelly Sullivan) decided to be neighbors with Adam Newman (Justin Hartley) and Chelsea Newman (Melissa Claire Egan) instead of moving home, Nick is feeling very vulnerable. In the guise of comforting him about lost love, Dr Anderson revealed that she’s single.

She also talked about someone in her past that she loved that hurt her and was never held accountable for what he did to her. She even said that special someone from her past was a lot like Nick.
Now that Sandy has stripped Nick of his wife and newborn baby – and Adam took his place at work, he’s untethered.

Nick is very vulnerable right now and it’s the perfect time for Dr Anderson to deliver the coup de grace and get him to fall for her (or at least fall into bed with her) and wreck any hope of salvaging his relationship with Sage.

If Dr Anderson is Sandra Allen, and it seems clear now that she is, she wants to hurt Nick emotionally as bad as his actions hurt her physically when her neck was broken. Getting Nick to fall in love with her would be the perfect icing to her revenge cake.

Then Sandy could leave him with nothing when she dumps him and reveals that all the tragedy that has befallen him in recent months is his fault and not just random events. She can tell him that his family left her broken without remorse and now she’s doing the same to him.

Even when the big baby reveal is made and Nick realizes Christian is NOT dead, the further revelation that Adam is Christian’s biological father and not Nick will make things so much worse since Adam just usurped his place at the family business and Sage admitted she loves Adam.

On a side note, there’s also a chance that Dr Anderson was working Ian Ward (Ray Wise) in all of this. Think about it. While Ian attacked the company with Paragon to wreck their finances, Dr A went after Nick’s personal life.

If things had gone as planned, Newman Enterprises could have gone bust. Dr A would like the idea of stripping the Newmans of all their wealth so that they can’t keep buying their way out of trouble like they did with her accident.

And where would Dr Anderson have met Ian? That’s an easy one – she could have been the psychiatrist assigned to work with unbalanced inmates at the prison. And as Ian talked about his issues and hatred for the Newmans, Sandy could have shared her own experience and the plot could have begun.

Y&R spoilers reveal that Dr Anderson is not near done messing with Nick’s life and an affair seems like a logical next step. Sandy likely wants Nick to want her just like she used to want him back when they were younger.

And with Nick suffering like he is right now, it seems a perfect time to pounce and finish him off since he’s wounded and limping like a weak gazelle at the back of the Newman herd. So what do you think Y&R fans? Do you think Dr A is moving in to seduce Nick and finish the ruination?

Stay tuned to CDL for tons more “The Young and The Restless” spoilers, updates and news every day.