BY Stormy Elizabeth on December 1, 2015 | Comments: one comment
Related : Soap Opera, Spoiler, Television, The Young and the Restless 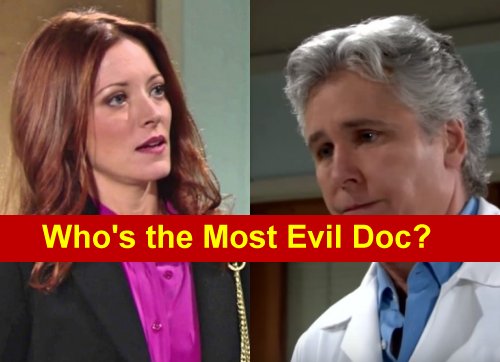 “The Young and the Restless” (Y&R) spoilers tease that Dr Anderson (Elizabeth Bogush) and Dr Neville (Michael E Knight) are far from done with their evil medical maneuvers. But which one of them is the worst and most evil dread doc in Genoa City?

Let’s consider. First off, we don’t really know who Dr Anderson is – but “Young and the Restless” spoilers indicate that she’s likely someone who was done horribly wrong by the Newman clan in the past and could be Sandra Allen – a blast from Nick’s past.

Sandra was a teen that a young Nick Newman (Joshua Morrow) talked into a dumb daredevil dive at the Newman Ranch pool that broke her neck. Victor Newman (Eric Braeden) paid Sandra and her family off and thought it was done.

This was speculation, but now that Dr A ranted to Nick and Sage Newman (Kelly Sullivan) it seems likelier that she’s Sandra. Dr Anderson, quoting Sharon Newman (Sharon Case), said: “…the Newmans and the ends they’ll go to when it comes to protecting their own – how they tend to close ranks, manipulate the lives of outsiders – whatever it takes to shelter themselves and their empire.”

So now that we understand her motivations – likely grief due to something the Newmans did to her – let’s look at Dr Anderson’s mad medical practices.
#1 Dr A has been drugging Sharon and convinced her she was pregnant.
#2 Dr A cut Sharon off from her family so she could isolate and horribly medicate her.
#3 Dr A faked the death of baby Christian to devastate Nick and Sage.
#4 Dr A gave the baby to Sharon and told her it was hers and Dylan McAvoy’s (Steve Burton) child.
#5 Dr A is now trying to get Nick and Sage into therapy with her to further manipulate them.

Now let’s look at Dr Neville. He seems the embodiment of a mad scientist, experimenting on patients with unlicensed drug combinations. Neville was so out of control that he lost his medical license, but that hasn’t slowed him up too much.

Even after he was fired by Genoa City Memorial Hospital, Neville eagerly took on the assignment to bring Hilary Curtis (Mishael Morgan) back from her catatonic state and it’s true that he succeeded. But do the ends justify his mad means?

Here’s a quick rundown of Dr Neville’s evil deeds that scream “Hippocratic oath be damned” and have us thinking he’s not the doctor you want at your bedside.
#1 Dr Neville kept practicing without a license and jumped at the chance to experiment on Hilary.
#2 Dr Neville dozed off and let Hilary wander off then chased her down and drugged her again.
#3 Dr Neville snuck into the hospital posing as a florist to read Hilary’s charts and lied to cops.
#4 Dr Neville continues to drug Hilary with questionable meds he says are necessary.
#5 Dr Neville knocked Dylan out with a drugged syringe so he could escape again.

So what do you think? Who is the worse doctor? While it’s true Dr Anderson still has her medical license (for now), Dr Neville hasn’t fake a baby’s death to traumatize anyone. Dr Neville seems to be focused on experimental medicine to help people while Dr A is obviously out to wreak havoc on her patients.

Vote in our poll for who you think is the most evil doctor in Genoa City, share your thoughts in the comments below, and be sure to check back with CDL often for more “Young and the Restless” spoilers, gossip and more.