The Young and the Restless (Y&R) Spoilers: Guilty Verdict For Adam, Sentenced to 10 Years – Car Strikes Adam Outside Courtroom 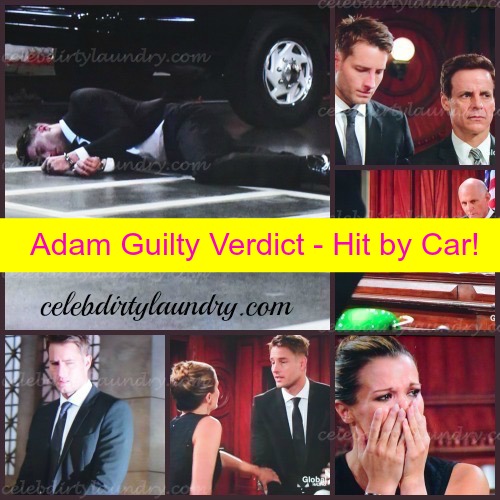 “The Young and the Restless” (Y&R) spoilers for Friday, October 23, tease that Adam (Justin Hartley) is found guilty! As the judge prepares to sentence Adam, several people will take the stand to make statements. Kevin (Greg Rikaart) will believe Adam should be punished to the full extent of the law for taking Delia’s (Sophie Pollono) life.

Jack (Peter Bergman) will request forgiveness and Victor (Eric Braeden) will insist that Adam has taken responsibility for his actions. Esther (Kate Linder) will declare that she’s appalled by Adam and his cover-up. Chelsea (Melissa Claire Egan) will step up last and plead for mercy.

The judge will ask Adam if he’d like to say anything. Adam will indicate that he’s remorseful for the pain he’s caused. Adam will add that he wants to be there for his family. The judge will leave to deliberate and he’ll come back a little later with the big news.

Adam will listen as the judge sentences him to 10 years in prison. Kevin will be angry that Adam didn’t get more time. Adam will be led out of the courtroom to be transported to prison. As he walks outside, Adam will be struck by a car that was obviously on a deadly mission to kill him.

Other “Young and the Restless” spoilers reveal that Cane (Daniel Goddard) will find himself in hot water. Paul (Doug Davidson) will show up with a warrant to search Cane’s home. The cops have one for Cane’s locker, too. Cane will deny any wrongdoing and Neil (Kristoff St. John) will try to convince him that everything’s going to be OK.

Meanwhile, Joe (Scott Elrod) will fish for information about the warrant, but Dylan (Steve Burton) will tell him to stay out of it. Lily (Christel Khalil) is trying to be there for her husband. Joe will make it clear that he doesn’t take orders from Dylan.

When the police find a dark hoodie in Cane’s locker, Devon (Bryton James) will confront him about it. Devon will want Cane to admit the truth and they’ll start shoving each other. Dylan will try to diffuse the situation.

Talk will turn to the surveillance footage of Cane walking to his locker with something tucked under his arm. Lily will begin questioning Cane and he’ll be angry that she’s still not convinced of his innocence. Cane will stomp off and Neil will go after him.

Neil will find Cane packing at home. Cane will insist that he can’t stay there now. Even Lily appears to have doubts about Cane. Elsewhere, Joe will track down Lily and say she looks like she could use a friend. Joe seems to think he can swoop in and take whatever woman he wants. Y&R rumors hint that slick Joe could have something to do with the evidence pointing to Cane.

At the park, Billy (Burgess Jenkins) will reflect near Delia’s tree. Victoria (Amelia Heinle) will tell Billy that forgiving Adam was important, but he also needs to forgive himself. Billy will suggest that it’s impossible.

It was Billy’s job to protect Delia and he can never forgive himself for how he failed her. Victoria will say Billy buried his daughter and he has to find a way to bury his guilt, too. Billy will pull Victoria close for a hug. Soon, Billy will hear Delia say she loves him. Stay tuned to the CBS soap for updates on Billy’s attempt to put the past behind him.