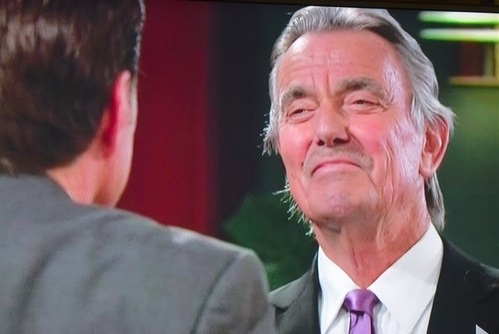 “The Young and the Restless” spoilers for Thursday, August 20, tease that Jack (Peter Bergman) will let Marco (Peter Bergman) know that he’s the one in charge now. Marco will maintain that he didn’t kill those kids or keep Jack on that island. Jack will shout that Marco slept with his wife. Marco will make some snarky comments about Jack and Phyllis’ (Gina Tognoni) love life. Jack will smash a bottle on a mantle and raise it above Marco. Marco will urge him to go ahead, but Jack will toss it aside and demand answers.

Marco will state that he took over Jack’s life and Victor (Eric Braeden) realized what was going on. Victor wanted a piece of the action. Marco will say something about Phyllis in the bedroom and Jack will give him a good slap. Jack will declare that he’s ending this and he’ll leave Marisa (Sofia Pernas) to keep an eye on Marco. Once Jack is gone, Marco will try to get Marisa to untie him by suggesting that she’ll lose Noah (Robert Adamson). Marco will argue that either Jack or Victor will surely turn on Marisa.

Summer (Hunter King) will announce that she finally remembered what happened at the cabin. Summer will recall hearing the ringtone and opening her eyes. Detective Harding (Chris McKenna) looked directly at Summer before making a run for it. Summer will feel terrible about blocking the memory for so long, but Mariah (Camryn Grimes) will assure her that anyone would want to forget something so horrific. Summer will still wish she could’ve remembered sooner and Noah will imply that they could’ve saved Courtney (Kelli Goss). Noah will add that he doesn’t blame Summer, but he’s worried about Marisa now.

Kevin (Greg Rikaart) will say they should give Paul (Doug Davidson) updates on what they’ve learned. Dylan (Steve Burton) needs to know, too. Meanwhile, Dylan and Harding will chat with Victor about Marco’s possible motive for coming after Jack. Dylan will wonder if Victor was working with Marco as well. Kevin will speak with Dylan in private about what Summer remembered. Dylan will think they need more evidence to bring down Harding. Back at the office, Victor will call Paul and complain about Dylan working with the police.

Other “Young and the Restless” spoilers reveal that Jack will meet up with Victor and pretend he’s Marco. Victor won’t buy Jack’s ploy. Jack will indicate that he’s got the upper hand and Victor needs to make sure Marco pays the ultimate price. Elsewhere, Noah will also have something to get off his chest. Noah will find Harding and confront him about the murders. The preview for the Friday August 21 Y&R episode shows Harding and Noah in a life and death struggle with Harding drawing his gun prepared to kill his accuser!

On a hiking trail, Neil (Kristoff St. John) will say he felt guilty about keeping Hilary (Mishael Morgan) out of the loop on her new husband’s cheating. It’s time for Hilary to hear about Devon’s (Bryton James) dirty deeds at his bachelor party. Neil will start to play the video, but Hilary will grab the phone and throw it. Hilary will insist that the footage must be fake. Neil will assure Hilary that it’s real and he’ll pick up the phone to play it again. Hilary will be stunned by what she sees.

At the hotel, Devon will leave Hilary a message to let her know his motion sickness has subsided. Devon will learn that Hilary went on the trail without a guide and he’ll be concerned. The guide will urge Devon to sit tight while they track Hilary down. Later, Devon will talk to security and they’ll say Hilary hasn’t been seen on the property. Suddenly, a police officer will show up with big news. Y&R rumors hint that Neil’s actions could have shocking consequences. Stick with the CBS soap to see how Devon will cope.
Voice your opinion in the comments below and don’t forget to check CDL often for the latest “Young and the Restless” spoilers, rumors, updates and news.