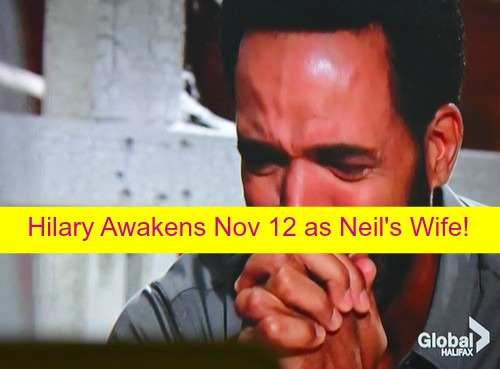 “The Young and the Restless” (Y&R) spoilers are in, and it looks like Hilary’s (Mishael Morgan) return will air on November 12. There is so much speculation about how she will react when she finally wakes up to learn that Neil Winters (Kristoff St. John) kidnapped her for months on end.

Devon (Bryton James) falsely believes that if he finds his new bride that everything will work out. Is it possible that Hilary will face health problems as a result of her two-month coma?

Hilary has been in a coma for about two months. In that time, she hasn’t woken at all; she’s given no real sign that she was improving at all Gwen (Nadine Nicole) hired a specialist whom she felt may be able to figure out the cause of Hilary’s coma. Neil agreed with her and felt that Dr. Neville (Michael E Knight) could be Hilary’s best shot at a recovery.

The spoilers tease that on November 12 Hilary will awake and seem confused. It seems likely she will suffer severe amnesia- not remembering her life with Devon. In fact, the rumors stated she would think she is still married to Neil and will not feel anything for Devon at all.

Imagine the heartbreak Devon will feel when his new wife denies him the love and affection he feels for her. Some fans are praising the idea of giving her amnesia- citing it as being karma to Devon for getting tangled with his step-mother in the first place.

“The Young and the Restless” rumors hint that Hilary will make a full recovery but will struggle to remember her life with Devon. She will tell the Winters’ family that she is married to Neil and demand that she go home with him from the hospital. The spoiler goes on to say she doesn’t believe that she was married to Devon and dismissed the notion that the two had an affair.

It seems like the writers are toying with the fans by stringing the dead storyline a few more months. Now, the fans will have to endure another recuperation storyline- while she gathers bits and piece of her memory back. It is speculated that she will remember that she married Devon during February sweeps- which means the fans have months of the Winters’ drama to endure – we meant enjoy!

“The Young and the Restless” fans should expect twists and turns in the storyline in the next few weeks. It looks like Joe Clark (Scott Elrod) may get tangled in the ransom note nonsense. Do you think Hilary will remember Devon when she wakes up? Did Cane (Daniel Goddard) send the ransom note? Don’t forget to come back daily for more juicy CDL “The Young and the Restless” spoilers, rumors, and updates!