The Young and the Restless (Y&R) Spoilers: Jack Rages at Adam – Ashley Teams Up with Dr. Neville – Drunk Billy’s Outburst 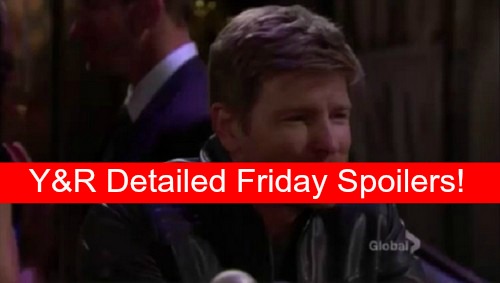 “The Young and the Restless” spoilers for Friday, December 18, tease that Phyllis (Gina Tognoni) will question Ashley (Eileen Davidson) about why she stepped down as CEO. Ashley will hint that she has another project in the works.

When Ashley sees Stitch (Sean Carrigan) at the hospital, she’ll ask him what he thinks about Dr. Neville (Michael E. Knight). Ashley will suggest that she’s done her research and Dr. Neville seems like a brilliant man. Stitch will believe Ashley should stay away from the shady doc.

At the athletic club, Chelsea (Melissa Claire Egan) will have a chat with Victoria (Amelia Heinle). Billy (Burgess Jenkins) has really been struggling. His drinking and gambling are getting out of control.

Victoria will indicate that she’s done with Billy, but Chelsea will remind her of the rare love they share. Chelsea will think that kind of love is worth fighting for.

Meanwhile, Devon (Bryton James) will let Neil (Kristoff St. John) know that he decided to give Dr. Neville the money. Neil won’t be pleased, but Devon will insist that he had no choice. Dr. Neville will show up and suggest that he would’ve exposed everything if Devon hadn’t intervened.

Paul (Doug Davidson) will arrive and point out that he knows what Dr. Neville did. Nevertheless, Paul won’t plan on arresting Dr. Neville just yet.

Dr. Neville will make his exit and Devon will give Paul the news that he invested in the research. Devon will think he can get more info out of Dr. Neville this way. After Paul departs, Neil will tell Devon that he’ll be watching Dr. Neville. They’re in this together.

Elsewhere, Ashley will have a proposition for Dr. Neville. She’ll believe his research is promising and her work as a chemist could prove beneficial. Dr. Neville will state that he wants to give hope to people who truly need it. Ashley will declare that Dr. Neville has a partner.

Other “Young and the Restless” spoilers reveal that Adam (Justin Hartley) will want Noah (Robert Adamson) to show Luca (Miles Gaston Villanueva) and Marisa (Sofia Pernas) around their new office space. The plan is to eventually bring down Luca and cut ties with the Santori family.

Once Luca and Marisa will show up, Noah will announce his new position. He’ll be quick to point out that his feelings won’t get in the way. Luca will be pleased by the offices and he’ll tell Noah he’s free to go.

At Jabot, Jack (Peter Bergman) will tell Kyle (Lachlan Buchanan) that he’s counting on him. They’ll have to put their heads together and rebuild the company. Adam will arrive and offer to help Jack out. Jack won’t want any part of it after what Adam did.

The Paragon virus was what started this mess. Jack will tell Adam to stick with Victor (Eric Braeden) and order him to get out. Later, Phyllis will pop in and bounce some ideas off of Jack. They’ll agree to make the company stronger once the holidays are over.

Abby (Melissa Ordway) will come to The Underground and see Billy drinking at the bar. Billy will say he’s celebrating the fact that Jack fired him. Stitch will show up and tell Abby about Ashley’s interest in teaming up with Dr. Neville.

When Victoria enters, Abby and Stitch will try to keep her from noticing Billy. Victoria will realize what’s going on and head over to confront her ex. They’ll bicker about his gambling and Stitch will want to take Billy home.

Billy will insist that he doesn’t have a home now. Victoria kicked him out. Billy will suggest that maybe Victoria was trying to make room for Stitch. Billy will try to throw a punch, but he’ll stagger from the alcohol.

As Stitch leads him out, Billy will tell Victoria that he’s sorry. This is just another one of Billy’s many outbursts, but Y&R spoilers hint that he could be on the road to redemption soon.

At Chelsea and Adam’s penthouse, she’ll tell him about her conversation with Victoria. Adam will mention that things didn’t go well with Jack. Chelsea will think they should be grateful they have another chance to be together.

They should never take it for granted. Adam will agree with Chelsea and they’ll make love. Stick with the CBS soap for updates how long their happiness will last.