BY Chrissie Williams on November 16, 2015 | Comments: one comment
Related : General Hospital, Soap Opera, Spoiler, Television, The Young and the Restless 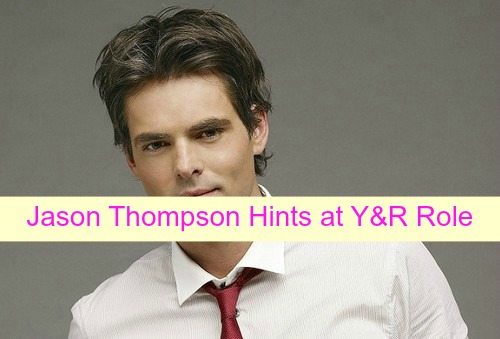 “The Young and the Restless” spoilers tease that Jason Thompson could be on the Y&R canvas sooner than originally planned. Thompson had planned to stay as Dr. Patrick Drake throughout February sweeps, but a recent script change places him out on “General Hospital” as early as Christmas.

Yesterday, Sunday, November 16 at a fan event, it was announced that Jason Thompson was officially OUT as Dr. Patrick; he is no longer filming any scenes. If he is completely done with “GH,” then he could be making his way to the CBS set in a few weeks.

Burgess Jenkins has not made an official announcement about when his last air date is yet. His last air date could be approaching as he signed a one-year contract at the end of the year in 2014. He announced several weeks ago that he planned on leaving the soap opera, and will NOT sign a new contract.

“The Young and the Restless” fans are having a hard time embracing anyone in the role of Billy Abbott, so Thompson will have his work cut out for him. Billy Abbott has been a role that has not found the right person to portray him since Billy Miller left the role in January of 2014.

Jason Thompson is expected to debut in the role during February sweeps, which start after the third week of January of 2016. CBS is hoping that his experience and fan base will benefit the show. Thompson is a seasoned soap star who could be the perfect Billy.

The one detail most fans were most concerned about was his hair color. Apparently, no one has heard of hair color, and there is no indication, they would have to change his hair to look like an Abbott exactly.

Jason Thompson stated, “I am done with Dr. Patrick Drake, but this is not goodbye – it is only goodbye as Patrick. I will be back, shortly” It was as if he was telling his fans that he will be leaving Patrick behind, but they will see him in a few months as a new character- presumably Billy Abbott.

CBS Soaps in Depth reported that Thompson had been the number one pick for the role of Billy Abbott and had a great on-screen chemistry with Amelia Heinle during his recent screen test. It seems like CBS has found the new Billy.

Will Jason Thompson be able to make the role his own like Justin Hartley did with the role of Adam Newman? Don’t forget to check back later for juicy “The Young and the Restless” spoilers, updates, and news!