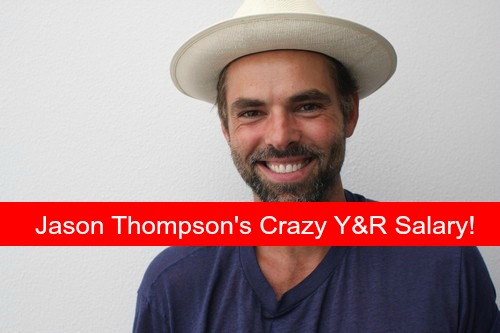 “The Young and the Restless” (Y&R) spoilers tease there could be big drama behind the scenes awaiting Jason Thompson upon his arrival on set Monday, December 15 to start filming as Billy Abbott. An exclusive CDL inside source revealed that a few key actors were not happy with the amount of money that Jason Thompson will be earning.

Jason Thompson’s salary could cause big drama on the set of “Y&R.” According to CDL’s exclusive source Jason was offered sizeable money to leave “General Hospital” and come to CBS, stepping into the role of Billy Abbott.

Our inside source revealed that Thompson would be making more than $20,000 per episode, promising him four episodes per week. In case math is not your strong suit, that is $320K per month, making him one of the show’s very highest paid actors and massively above 95% of all soap actors.

Before Thompson’s officially unconfirmed salary was leaked, it was believed that Eric Braeden, Sharon Case, and Justin Hartley [Adam Newman] were the highest paid actors on the show. When Hartley originally signed on the show, his contract gave him $22K per episode, giving him a minimum of three shows per week. After such a successful year, it is believed his salary likely doubled, giving him a two-year contract earning millions per year.

Eric Braeden [Victor Newman] has been a part of the show for over thirty years. In 2009, Braeden walked off the set in a contract dispute after he demanded more money. CDL’s inside source revealed that he settled on earning $25K per episode at the time, with a guarantee of two episodes per week. It allowed him time to travel and work on other projects as he saw fit.

Sharon Case [Sharon Collins – Newman] has been on the show for over 20 years. As much as many fans are not fond of her character, she is a vital part of the show and Ms. Case is a brilliant actor. Sharon’s salary is reportedly just under Eric’s at $18K per episode with a one episode per week promise. There are times that Sharon is not seen on air as much as Eric or Justin; however, recently she has been on five days a week.

It’s easy to see how Jason Thompson’s high salary could cause some tension. Eric and Sharon have spent years to earn their relatively high Y&R salary. How will the other cast members feel when they have to work with Thompson knowing he’s walking on the set with the third highest salary in the cast? Stay tuned for the latest in “The Young and the Restless” spoilers, gossip, and news!