The Young and the Restless (Y&R) Spoilers: Joe Attacks Lily, Brute Arrested – Dylan and Sharon Marry – Dr. A Reveals Past 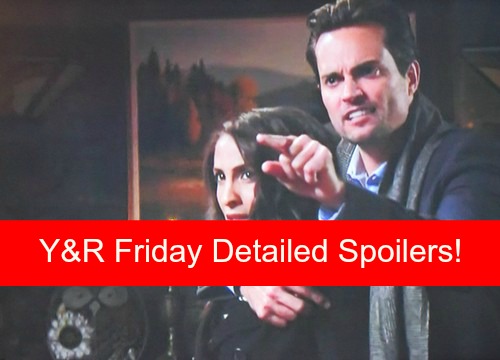 “The Young and the Restless” spoilers for Friday, December 11, tease that Adam (Justin Hartley) and Chelsea (Melissa Claire Egan) will get a new neighbor. Sage (Kelly Sullivan) will stop by and let them know that she’ll be living next door.

Chelsea will ask Sage if she’d like to make some little angels with Connor (Gunner and Ryder Gadbois). When Chelsea notices how Sage is looking at her son, she’ll apologize for having him around. Sage will insist that it’s therapeutic for her.

While Chelsea is putting Connor to bed, Adam will grab a nightcap and Sage will toast to mothers. Sage will admit that she thinks she would’ve been a good mom. Adam will suggest that having some fun with Chelsea and Connor seems to have lightened her mood.

Sage will point out how easy it is to be around Adam and his family. It’s still so difficult with Nick (Joshua Morrow) and his kids. Adam will insist that things will get better. Sage will say Dr. Anderson (Elizabeth Bogush) was right about spending some time away from Nick.

Meanwhile, Sharon (Sharon Case) will be over the moon when Dylan (Steve Burton) says he wants to get married right away. Since Paul (Doug Davidson) got ordained online, he’ll be officiating the ceremony. Noah (Robert Adamson) and Mariah (Camryn Grimes) will attend.

Nick will decide to stay as well. When Dr. Anderson drops by to return Sharon’s phone, Sharon will ask her to be a guest. Dr. A will be honored to be a part of it all.

Faith (Alyvia Alyn Lind) will insist that Sully needs to be there. They’ll bring the baby in and continue the ceremony. Nick will look a little upset by Sharon and Dylan’s happiness. Mariah will talk to Dr. Anderson about how she came over to do a good deed, but ended up watching a wedding instead. Dr. Anderson will say she’s all about doing good deeds.

Once the vows are said and the wedding pics are taken, Nick and Dr. Anderson will leave. Nick will ask Dr. A if she’s in a relationship. The doc will reply that she’s married to her work, but there was someone once. This mystery man was very down to earth.

Dr. Anderson will say he was a lot like Nick. However, it didn’t work out. The worst part is he didn’t even take responsibility for his actions. Dr. Anderson will mention that she became a therapist to help people so she could heal herself. It seems Dr. Anderson feels a lot better about how things are shaping up now.

Other “Young and the Restless” spoilers reveal that Devon (Bryton James) and Cane (Daniel Goddard) will get some help from Kevin (Greg Rikaart) as they try to locate Lily (Christel Khalil). Once they track Lily’s car, Cane and Devon will head off to find it.

Kevin will call Paul and give him updates on the situation. Cane and Devon will find the vehicle, but Lily won’t be around. Cane will believe Lily and Joe (Scott Elrod) might be at the Abbott cabin. They’ll rush over to save Lily from Joe’s wrath.

At the cabin, Joe will lash out at Lily for her scheme. Lily will try to explain that she wants to work on her marriage, but Joe won’t think Cane appreciates her. Joe will rant about Avery (Jessica Collins) and how she accused him of doing something he didn’t do.

Joe will grab Lily’s arm and suggest that she doesn’t know what real pain is. Suddenly, Devon and Cane will burst in. Joe will grip Lily’s neck and exclaim that he knew it was a setup.

Devon will explain how they tracked Lily’s car. Joe will gripe that he would’ve framed Cane sooner if he had it to do over again. Paul will arrive just in time to hear Joe confessing and he’ll place him under arrest.

Cane will thank Devon for believing in him, but he’ll still have a hard time accepting Lily’s initial doubt. Lily will want to work through their issues, but Cane won’t be sure they can. Lily will go back to her car and cry as snow falls.

Back at Dylan and Sharon’s place, they’ll prepare to make love. When Sully starts crying, Sharon will declare that the honeymoon is over. Faith will sing “Silent Night” to get Sully to sleep. It looks like Dylan and Sharon are enjoying a moment of bliss right now, but that should change soon enough.

Dr. Anderson’s actions will undoubtedly mean bad news down the road on Y&R. Stick with the CBS soap to see if these new parents will have their happiness ripped away.