‘The Young and the Restless’ (Y&R) Spoilers: Neil Dumps Gwen – Kevin and Mariah Get Steamy – Ian Tampers With Chelsea’s Line 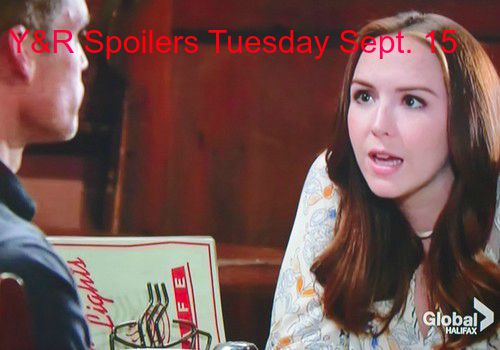 “The Young and the Restless” spoilers for Tuesday, September 15, tease that Abby (Melissa Ordway) will be thrilled with the sales following her tweaks on Chelsea’s (Melissa Claire Egan) line. Kevin (Greg Rikaart) will hint that it might just be a glitch in the system. Mariah (Camryn Grimes) will also share the news that Kevin is working for Victor (Eric Braeden) to catch the hacker. Noah (Robert Adamson) will suggest that the payoff won’t be worth it. Making deals with Victor can prove quite costly. Abby will get sick of all the Debbie Downers and say she’s going to celebrate her success elsewhere.

Noah and Marisa (Sofia Pernas) will enjoy a warm moment as they grow closer. Unfortunately, Mariah and Kevin will have trouble getting on the same page. Kevin will open up to Noah about being stuck in a rut. Meanwhile, Marisa will encourage Mariah to make changes in her relationship right away. Later, things will heat up for Kevin and Mariah in a suite at the athletic club. Mariah will put on sexy lingerie and it’ll certainly catch Kevin’s eye. They’ll make out and start stripping down.

Other “Young and the Restless” spoilers reveal that Jack (Peter Bergman) will give Ashley (Eileen Davidson) updates on the Paragon Project. Jack will insist that they have to be ready for whatever comes their way. Ashley will let Jack know that her instincts say Joe (Scott Elrod) isn’t behind the plot. Once Jack departs, Stitch (Sean Carrigan) will chat with Ashley about Abby’s accomplishments at work. Abby will arrive and realize that Ashley still has some reservations about her working at Newman Enterprises. Stitch will indicate that Ashley’s beef is with Victor, not Abby.

At the cabin, Ian (Ray Wise) and Phyllis (Gina Tognoni) will talk as they prepare for dinner. Phyllis will enjoy hearing Ian’s views on life and he’ll say he’s appreciated her company. It’s been hard for “Fred” to meet new people since his wife died. Phyllis will bring up Summer (Hunter King) and Ian will mention that he had a daughter who turned her back on him. Jack will call Phyllis and she’ll mention her encounters with Fred. When Phyllis turns around, Ian will be gone. Back in his camper, Ian will announce big plans for the Paragon Project. Ian will suggest that Chelsea’s line is going to be his puppet show. Later, Abby will notice another uptick in sales and suspect that something’s up.

Emma (Alice Greczyn) will tell her supervisor that she misplaced her badge and Stitch will bash her for it. It seems they found a medicine cabinet open in the supply closet. Gwen (Nadine Nicole) will call Neil (Kristoff St. John) to question him about why he left so suddenly. Neil will reply that it’s difficult for him to be happy when Devon (Bryton James) is dealing with so much. When Neil hears that Emma’s badge is missing, he’ll say he can help look for it.

After Neil arrives, he’ll “find” Emma’s badge in between the couch cushions. Gwen will be suspicious that Neil planted it there. Neil will declare that they should just end this before it goes any further. Neil will return to an unconscious Hilary (Mishael Morgan) and hint that stopping things with Gwen is for the best. It sounds like Neil’s dilemma is causing a lot of trouble. Y&R rumors say that Neil will soon crack under the pressure. Stick with the CBS soap to see if Neil will come clean about his involvement in Hilary’s disappearance.