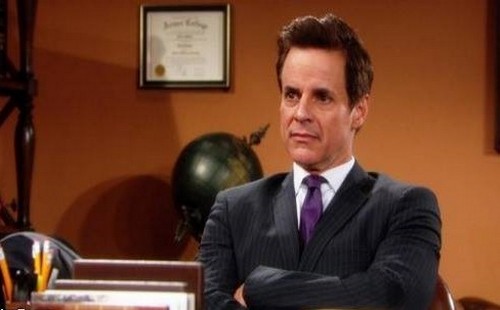 “The Young and the Restless” spoilers and rumors have been teasing for months now that Christian LeBlanc was leaving the CBS soap and his character Michael Baldwin will be killed off. The rumor isn’t exactly far-fetched that Michael Baldwin could be dying seeing as how he was diagnosed with cancer in 2014. Michael’s cancer storyline has been running its course for months on Y&R, but spoilers tease that the lawyer may be hiding his true prognosis from his wife Lauren and skipping his cancer treatments! On the Y&R April 23 episode Michael collapses unconscious at Sharon’s house and things don’t look to good for our intrepid lawyer!

Recently on “The Young and the Restless” Michael Baldwin has been acting out of character, not only is he pulling away from his wife Lauren Fenmore and still refusing to have sex with her even though he is supposedly getting treated and on the mends – but it appears that he is actually trying to push his wife Lauren and Cane together (even though he is technically a married man himself). It looks like the Y&R writers are mirroring a popular stage that a lot of cancer patients go through in real life – when they know the odds of their survival is slim to none. Cancer patients tend to pull away from their loved ones, because they think it will make them less devastated when they do pass away. Michael Baldwin loves Lauren, so in a twisted way pushing her closer to Cane might be the best thing for her.

“The Young and the Restless” spoilers have been teasing that a veteran male character on the CBS soap will be killed off soon – and general consensus among Y&R fans is that it will be Michael Baldwin. Rumor has it that Michael has been lying about going to his doctor appointments and treatments because he learned that he has waited too long to seek help and would not be effective, however he hasn’t bothered to tell his wife Lauren that yet. Think about it – why have we never actually seen Michael go to treatment, and why does he have so much time to work if he is supposedly battling cancer?

An interesting theory that Y&R fans have been tossing around online is that Michael Baldwin may be creating some sort of video diaries and leaving messages for all of his friends and family, obviously including his wife Lauren, and he will explain why he did the things he did before he passed away – like encourage her to get loser to another man. Considering Michael’s long and lengthy run on the CBS soap – it seems logical that the writers will use the video diaries to keep the character’s memories alive over the years after his demise.

What do you think Y&R fans, is Michael skipping his cancer treatments? Do you think that Christian LeBlanc is exiting the show? What do you think of the video diary twist? What about Cane and Lauren getting closer? Let us know what you think in the comments below and don’t forget to check CDL tomorrow for more “The Young and the Restless” spoilers and news.