‘The Young and the Restless’ Spoilers: Lily and Cain Break Up – Neil Winters Tries To Kill Son Devon After Cheating Discovery 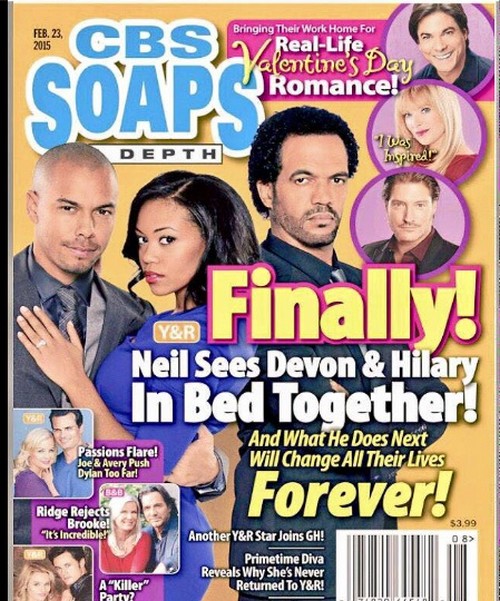 “The Young and the Restless” spoilers tease that Neil Winters and his family are in for some serious drama in 2015, and some near-fatal situations that could forever change the dynamic of their relationships. Neil Winters lost his eyesight in 2014 when he was electrocuted, over the last few weeks he has begun to slowly regain some of his eyesight – and he is currently undergoing some experimental treatments that are believed to render him a seeing man again. But Y&R spoilers tease that Neil regaining his eyesight will be a gift…and a curse, because we all know it is only a matter of time before he discovers that while he was living in the dark, his son, Devon, was having sex with his wife, Hilary.

Y&R fans know that it is only a matter of time before Neil discovers the truth about Hilary’s affair; after all, it is a soap opera and it’s a little cliché. However, “The Young and the Restless” spoilers tease that the fallout after the truth is revealed will be epic, and completely tear the Winters family apart. According to “The Young and the Restless” spoilers, the Winters family will face a “life and death situation” and the dynamic of their relationships will forever be changed.

When “The Young and the Restless” spoilers revealed that the Winters family would come face to face with a “life or death” situation, the rumor mill shot into overdrive. Rumors are all over the internet claiming that Neil Winters will turn to booze again – and the life or death situation will be that he attempts to take his own life and commit suicide. Another popular theory is that Neil will go into a drunken fit of rage and try to kill his son Devon. What Y&R fans seems to be forgetting, is that just a few months ago Neil’s portrayer had a real-life family tragedy of his own, and his young son committed suicide. There is no way the Y&R writers are going to make Kristoff act out such a traumatic scene that would hit so close to home for him. As far as Neil trying to kill Devon – well, anything is possible.

“The Young and the Restless” spoilers also tease that Neil and Devon’s relationship will not be the only one put to the test. Neil’s daughter Lily will be livid with Devon for her father’s betrayal, but she is going to be even angrier when she realizes that her own husband Cain helped Devon cover it up. Lily and Cain’s relationship has been pretty solid over the years, but a lie as big as this one could destroy them.

What do you think Y&R fans? Will Neil Winters try to kill Devon? If not, what “life and death” situation could happen to the Winters Family? Will Lily ever forgive her brother Devon, or her own husband Cain for lying to her? Let us know what you think in the comments below and don’t forget to check CDL tomorrow for more “The Young and the Restless” spoilers and news.